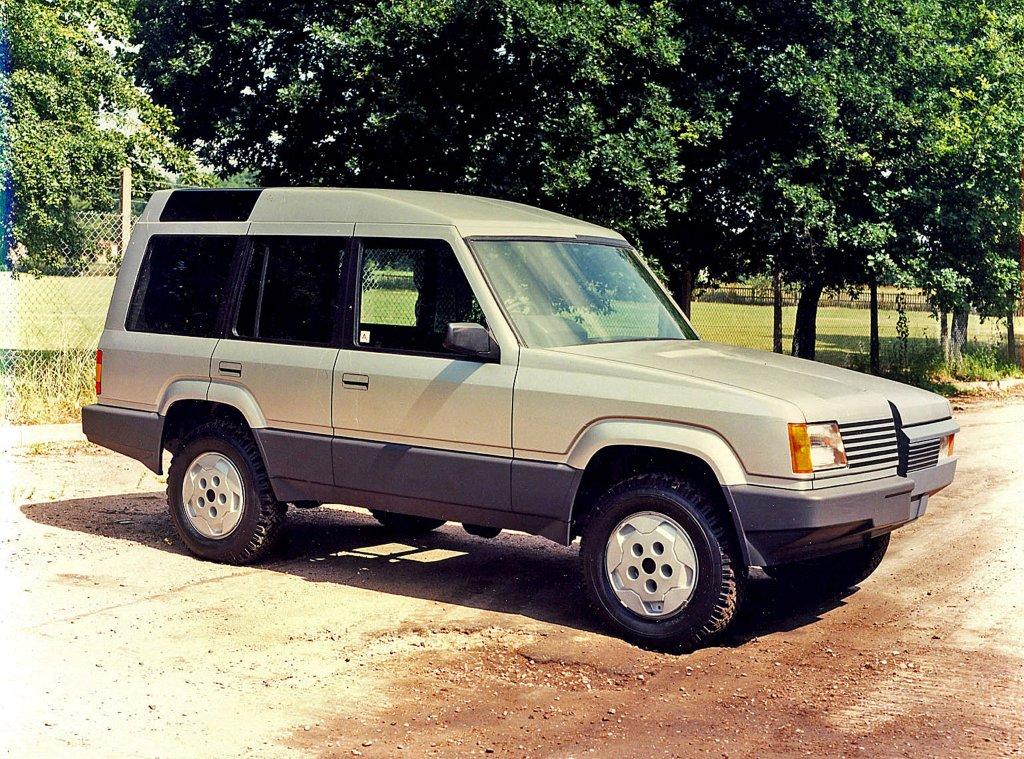 With five generations, 300 global awards and more than 1.7 million sales under its belt, the Discovery nameplate has proven itself as an icon of capability and versatility for three decades.

The luxurious family adventure vehicle we know today began life as a research project named “Project Jay” in 1986. The study was conceived to develop a vehicle to slot between the robust Defender and more upmarket Range Rover at a time when Land Rover’s lineup comprised only two vehicles.

In August, 1987 Project Jay received approval from the Rover board and two years later the first Discovery made its public debut, in three-door configuration, at the Frankfurt Motor Show.

Discovery 1: With a distinct stepped roofline and upper Alpine windows the first Discovery arrived with a fresh take on styling in the SUV segment. Its airy cabin, tiered theater-style seating (with optional sixth and seventh jump seats) and hard-wearing surfaces were targeted at families with an appetite for adventure.

The first Discovery landed in South Africa late in 1991 in a more practical five-door guise. Interestingly, the South African market was the first outside of Europe and the Middle East to introduce this body style.

The South African Rover director at the time was quoted as saying: “This is the only British model to win back, so decisively, a market that had once been lost to the Japanese competition,” in a 1991 issue of SA Car Magazine.

Priced at just under R180 000, the Discovery 1 featured a 3.5-litre V8 petrol engine with 122kW and 287Nm. In 1994 the Discovery gained a more powerful 4.0-litre V8, ABS brakes, dual electric sunroofs and airconditioners and leather upholstery.

With underpinnings based largely on the proven Range Rover, and including full-time four-wheel drive, a two-speed transfer case and locking centre differential, the original Discovery’s off-road pedigree was its strongest selling-point. This was backed up with successes at the Camel Trophy – a rigorous off-road driving competition held in treacherous regions such as Siberia, Burundi, Guyana, Sabah-Malaysia and Mongolia.

Discovery 2:  Discovery 2, also known as “Series II” debuted in 1999 and was a more sophisticated evolution of its predecessor. Its design was instantly recognisable with similar proportions and shape, but was in fact 98 per cent new.

headlights and a revised front bumper that greatly improved front-end ground clearance. Wheels were upped to 18-inches in diameter and interior trimming options were expanded to include a ‘Designer Choice’ style which was also borrowed from the more luxurious Range Rover.

Discovery 3: Revealed in 2004, the third-generation Discovery brought with it several objectives for Land Rover. This vehicle was to set new benchmarks for design, comfort and refinement in the SUV segment, while also increasing on-and off-road performance.

Where the Series II could be considered an evolution of the original, Discovery 3 was indeed an all-new model which introduced new levels of quality and reliability to the Land Rover brand. Out was the traditional ‘body-on-frame’ chassis and in was a higher-tech monocoque design for improved ride and comfort.

Coil springs made way for fully independent air suspension, wheel sizes were upped to 19-inches and fancy features such as premium Navigation and Bluetooth connectivity were included. But it was the introduction of Land Rover’s famed Terrain Response system which represented the largest leap in technical innovation.

Discovery 4: October 2009 saw the launch of the Discovery 4 – a modest stylistic upgrade over the third generation but one that brought with it improved dynamics, a new range of efficient engines and far more hi-tech features.

Inside the Discovery 4 gained improved seat designs, LED mood lighting, a TFT instrument cluster, USB ports, revised touch screen functionality and a dedicated iPod input among other niceties. High Beam Assist automatically dipped headlights for oncoming traffic at night, keyless entry and start was added, and a Surround View camera system made its way into Discovery for the first time, allowing drivers to see 360-degrees around the vehicle from the infotainment screen.

In 2014 a minor facelift saw the ‘Land Rover’ lettering across the bonnet changed to ‘Discovery’, and the digit ‘4’ was removed from the tailgate Discovery badge. This deletion foreshadowed the introduction of the next Discovery – which was to completely dismiss numeric references from Discovery’s naming convention.

Land Rover’s self-proclaimed ‘Best family SUV in the World’, the All-New Discovery, was introduced to South Africa in July, 2017.

The fifth and current generation Discovery represents a massive jump in style, tech, comfort and capability over its predecessors. Though everyday ingenuity has been at the heart of every Discovery for the past 30 years, the latest signals a transformation from cogs to code in a digital age.

Among a long list of clever technologies is a world-first Intelligent Seat Fold system, allowing owners to reconfigure the second and optional third seating rows using the central touchscreen, controls in the boot, or via smartphone app. The new Discovery features up to nine USB ports, six 12-volt charging points and in-car WiFi hotspot for eight devices.

All three seating rows are available with heated seats – heated and cooled in rows one and two – while massage seats are available for the driver and front passenger. Auto Access Height technology also reduces the ride-height by up to 40mm as passengers prepare to enter or exit the vehicle.

The premium SUV provides up to 2,500 litres load capacity, or up to 1,231 litres behind row two, and a dual-purpose Powered Inner Tailgate provides all the versatility expected from a vehicle wearing the Discovery badge.

When raised, the fold-down panel at the leading edge of the load area operates as a practical load restraint, but when lowered the overhang doubles as a useful bench for event seating or changing muddy footwear, all under the shelter provided by the new one-piece tailgate. This simple device replicates the functionality of the horizontally split tailgate fitted to previous generations of Discovery.

Ground clearance is rated at 283mm (up 43mm from Discovery 4) while a maximum wading depth of 900mm (up 200mm) puts Discovery in a class of its own when tackling waterlogged tracks or flooded roads. Land Rover’s latest multi-mode Terrain Response 2 system optimises a range of settings to suit the driving conditions at the turn of a rotary controller – and can even select the optimum setting automatically if drivers are unsure of the best choice.

Using an already well-appointed Discovery SE as a starting point, the Landmark Edition adds a Dynamic Pack, which includes a more aggressive front bumper and Narvik Black mesh grille and fender vents. Narvik Black nameplate scripting on the bonnet and tailgate is also paired with unique Landmark badging on the tailgate.

The Discovery Landmark Edition will be available in South Africa exclusively with a 190kW/600Nm 3.0-litre TD6 engine paired with an 8-speed automatic transmission. Pricing is set at R1,271,500 and includes a 5-year/150 000km warranty.

In 2009 Kingsley and his team departed South Africa in a Discovery 3 on a 100-day ‘Boundless Southern Africa Expedition”, to unite nature, culture and communities across the southern part of the continent from the Indian Ocean to the Atlantic. The trek covered nine countries, seven Transfrontier Conservation areas and over 30 national parks and game reserves.

Since then Holgate and crew have completed 12 other expeditions with Discoverys including his ‘Journey to Juba’ to celebrate the first Independence Day for South Sudan; “All Afrika” where a Discovery hitched a ride on a C130 transport aircraft to rescue an abused baby chimpanzee named Claude in the Central African Republic; and ‘Extreme East’ to visit war-torn Somalia’s Ras Xaafun – the most easterly point of Africa – to name a few.

Most recently Kingsley and his team successfully took a pair of new Discoverys from Cape Town to Kathmandu. This 17,000km journey took them through Africa, Turkey, Georgia, Armenia, Iran, Pakistan, India and Nepal.

Along the very challenging route they tackled high-altitude 4×4 passes clogged with snow and mud in the high Caucasus Mountains of Georgia close to the Russian border, endured below-freezing temperatures in Armenia, crossed the vast deserts of Iran and ran the gauntlet of military convoys in the dangerous Baluchistan region near the Afghanistan border.

Kingsley Holgate’s personal Land Rover Discovery 2, which was passed down to son Ross years ago, was recently handed over to Ross’s son Tristan making it a genuine Holgate family heirloom. Watch a video of the handover here: https://youtu.be/fOacCMHcmdM