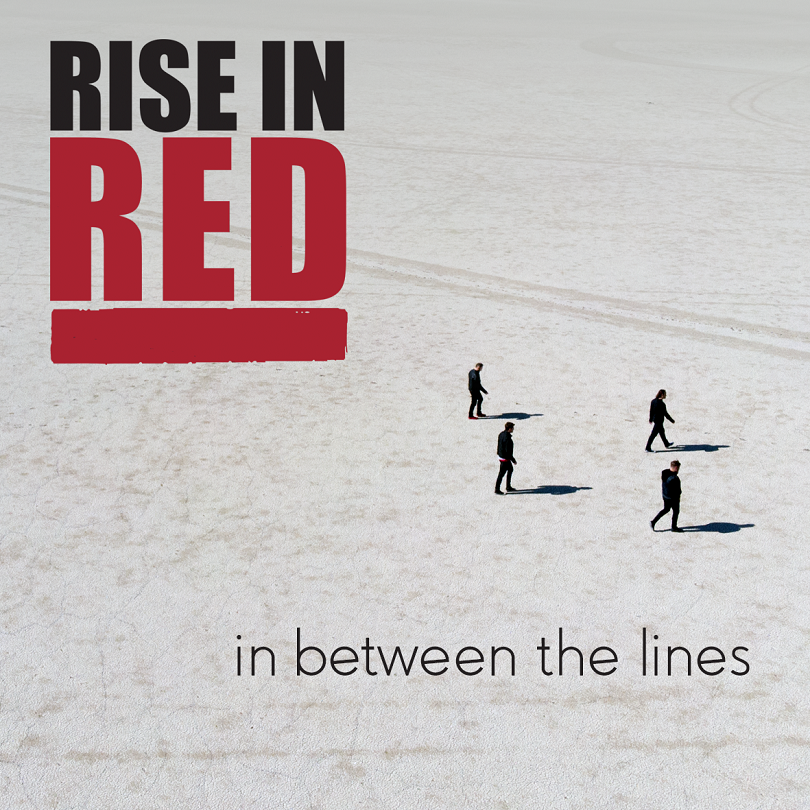 RISE IN RED has made a name for themselves with their inspiring lyrics and captivating stage presence. Earlier this year, this Bloemfontein-based alternative rock band impressed fans once again with the release of their latest single, In Between The Lines, which was very well received and is already play-listed on various national radio stations.

With its powerful message, IN BETWEEN THE LINES was also chosen as the title for the band’s long-awaited album, which has just been released and promises to impress audiences of all ages.

Like the song, the entire album offers a positive message and brings a sense of hope amidst the noise and events in South Africa and the world today. It not only boasts a modern take on rock music, but also offers a variety of sounds and emotions, which is sure to be good for the soul.

While it took some time to bring the album to fruition – the band started recording at the beginning of 2017 – the experience has been a positive one, according to the band.

“We immediately connected with Stef Myburgh, our producer, and he completely understood our sound and what we wanted out of the album. At times, it was a challenge to keep the energy levels up and keep on producing for days on end, but we love what we do and made the most of every moment,” says Reynolds.

The album offers eleven tracks, all written by the band. While presenting a good variety of sounds, the songs work well together to form a whole and offers a broad spectrum of RISE IN RED’s musical abilities instead of a one-dimensional experience.

As for the band’s favourite song? Apparently, there are a few. “Progression is almost a ‘founding’ song for us and elaborates on our journey – the path towards the realisation of the album was definitely one with twists and turns,” explains Reynolds. “We also love IN BETWEEN THE LINES, since it showcases our modern sound and has great melodies. That said, Rise Up is still our favourite song to play live because of its intense energy, while creating the video for Alright was lots of fun! It’s a difficult choice,” admits Reynolds.

Ultimately, the band wants people to enjoy the album and to take from it a sense of hope. “The entire album’s message is one of hope, as it deals with life experience and questions, but always with the resolution that there’s a better tomorrow,” says Reynolds.

Written by lead vocalist Dustin McCrindle, the title track is essentially a conversation about life. “Life has its pains, hurts and experiences. But along with that, there’s hope. This song brings a message of hope. Despite life’s twists, turns and heartache, there’s hope for a new day. Together we can get through anything,” says lead guitarist Jayson Reynolds.

“The song also represents what we’re about as a band. We want to share a message of hope, which is why we chose this song as the title track to our new album. Our message of hope is written ‘between the lines’,” he adds.

With great melodies and a relatable message tied neatly with a modern rock bow, the song offers easy listening and will no doubt appeal to a wide audience.

The band has also released a video for In Between The Lines, which bolsters their message of overcoming life’s obstacles together. “In the video, we start off by walking together. However, as in life, we eventually each take our own path and follow our own journey, until we meet up again at the end. The message is that we can overcome any odds together.”

Jayson explains how the idea for the video was born and what makes it unique. “We regularly get together to brainstorm and the idea for the video came out of one of these sessions. We all added parts of the story and in collaboration with our videographer, Llewellyn Lloyd from Reblex Photography, we looked for unique ways to emphasise the message we wanted to convey. We incorporated some interesting angles and drone footage to create a cinematic feel.”

RISE IN RED was established by Reynolds, McCrindle, drummer Jaco Novella and bassist Kyle Bath in 2010 as a project primarily focused on song writing and production. The band developed and established its unique sound and vision and moved towards live performances at the beginning 2015; the most notable of which was performing with Prime Circle during their ‘Let the Night In’ album tour. The band has also played alongside aKing, Dan Patlansky, Francois Van Coke and other notable acts. In 2018, Pierre du Toit joined RISE IN RED as the bassist for the band.

The band’s name came from Reynolds. “We are all Christians and our inspiration for writing songs is always centred on our beliefs. That’s why we focus on bringing a message of hope. Our name appeals to listeners to stand up (rise) for what they believe in,” he says.

Dustin McCrindle, lead vocalist and rhythm guitarist, is a pharmacist who enjoys being active. He started playing guitar in a church youth band when he was 14 years old and has been involved in music ever since. Dustin lives by the words: ‘Everything has influence’. “We can often choose to some degree how much things affect us, but they will in some way shape or form. Choose the things, media, people and messages you surround yourself with wisely,” he says. As far as writing music goes, he believes it is very personal. “It’s not always that sudden spark of magic, although that is a great way to write… when it happens. There’s nothing like a catchy hook to trigger a new song idea!” Dustin believes that the quickest way to spread ideas is through song. “Not everyone will read a book, but a good song will be sung by the masses over and over again – that is both scary and amazing.”

Jayson Reynolds, the band’s lead guitarist, runs a web app and branding company. He has been playing guitar since he was 14 years old; he sold all his cricket equipment to buy a steel string acoustic when he was 16 and got his first electric guitar for his 18th birthday. That guitar – called Scarlett – is still his favourite. Jayson’s inspiration is centred on what he believes in. “To me, music has to have an emotional connection, so I’m always inspired to write songs that ‘hit deep’ and have real feeling,” he says. Jayson believes that it’s never too late to start over. “Even though life has its ups and downs – and those downs can be extreme – it’s never too late for you to start anew and work towards a better tomorrow.” Jayson, whose dad was a pilot, is looking forward to completing his private pilot’s license – “I guess flying runs in the blood!”

Pierre du Toit is RISE IN RED’s bass guitarist and a personal trainer who runs his own gym. While fitness is important to him, he loves music as it is his creative outlet. Pierre has played in different bands over the last 20 years – everything from blues, rock and pop, to fusion and jazz – all of which has helped him become a very versatile musician. A career highlight for him was playing bass for a philharmonic orchestra. For Pierre, writing music is like being a painter. “My canvas is notes and my brush is my instrument,” he says. Apart from time spent with the band and running his gym, Pierre does sessions for a 1980’s cover band.

Drummer Jaco Novella is married and runs his own accounting firm. In addition to enjoying the hustle of being an entrepreneur, he is currently eagerly awaiting the arrival of his first child. He started playing drums when he was 15 years old and loves music because it brings every aspect of his life together. Jaco listens to a lot of metal and punk rock music. “These were my roots from when I was younger, and I still love it. My love for rock music is my inspiration and it drives me to be better at what I do.” His motto is simple: “Put your faith in Jesus and not in your own hands, because He can really change your circumstances.”

RISE IN RED is a versatile rock band whose ambient and emotive music has a wide appeal. Coupled with the group’s messages of hope and upliftment, IN BETWEEN THE LINES is sure to appeal to new and existing fans from all walks of life.

The album is available now on all digital platforms – get it here: