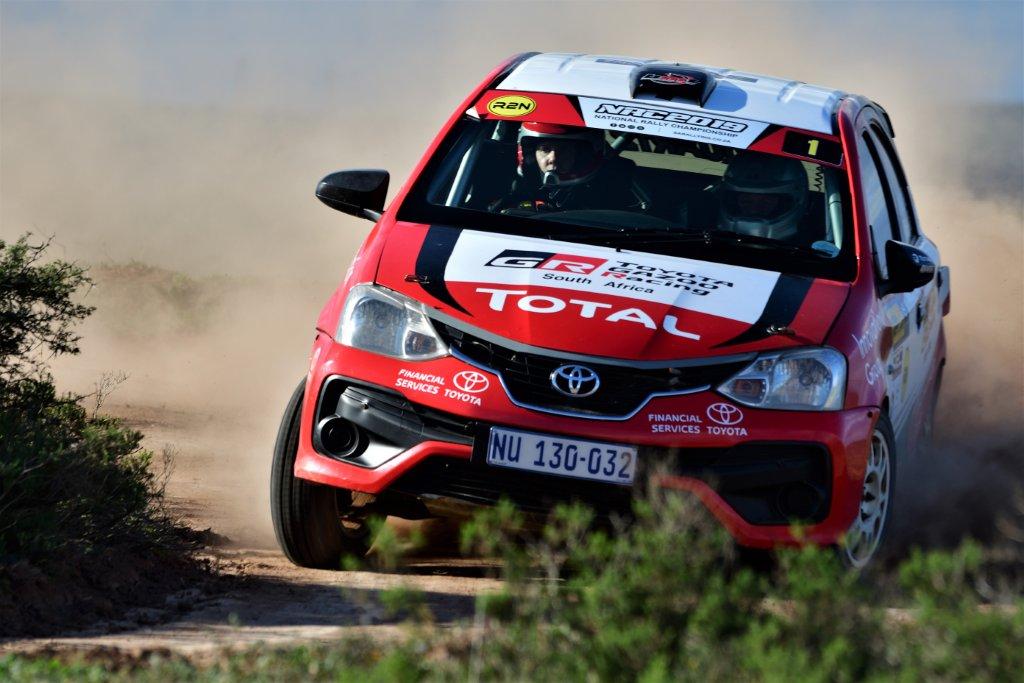 Brian Joss – There was disappointment for Toyota Gazoo Racing SA’s Guy Botterill and navigator Simon Vacy-Lyle at Round 4 of the 2019 South African National Rally Championship (NRC), which took place in and around Port Elizabeth on 19 and 20 July.

Day two of the Baywest National Rally was cancelled due to excessive rain in the area, which meant that the pair had to settle for second place, as that was their finishing position after day one.

“We had some issues towards the end of the first day,” said a rueful Botterill after the event. “We struggled with our alternator on the last long open section of the day, but then our power steering failed just as we started the final tarmac stages. This made it almost impossible to drive the car in the tight, twisty car park stages, and we lost a lot of time as a result.”

The crew worked feverishly to repair the normally reliable Class R2N Toyota Etios, and managed to complete all the repairs before the end of the day.

But then the rains continued overnight, all but flooding the stages in the Longmore Forest.

“We were upbeat about our chances on day two,” continues Botterill, “as we were only eight seconds behind AC Potgieter despite our troubles, with plenty of stages to come. And I usually find it fun to rally in wet conditions, so I reckon we were in with a very good chance for victory.”

Unfortunately, the organisers were forced to take the very difficult decision to cancel the remainder of the event for safety reasons, which relegated the Durbanites to second place.

This result leaves Botterill/Vacy-Lyle firmly in control at the top of the championship standings, but may result in pressure from Potgieter and navigator Nico Swartz (Volkswagen) later in the season. Third place at the Baywest National Rally went to Matthew Vacy-Lyle and Schalk van Heerden in a Class R2N Toyota Etios, who finished 36.9sec behind Botterill/Vacy-Lyle, and 44.9sec behind rally winners Potgieter/Swartz.

The next round of the 2019 NRC is scheduled for 23-24 August, when the Zane Rencken National Rally will take place near Dalton, KwaZulu-Natal.