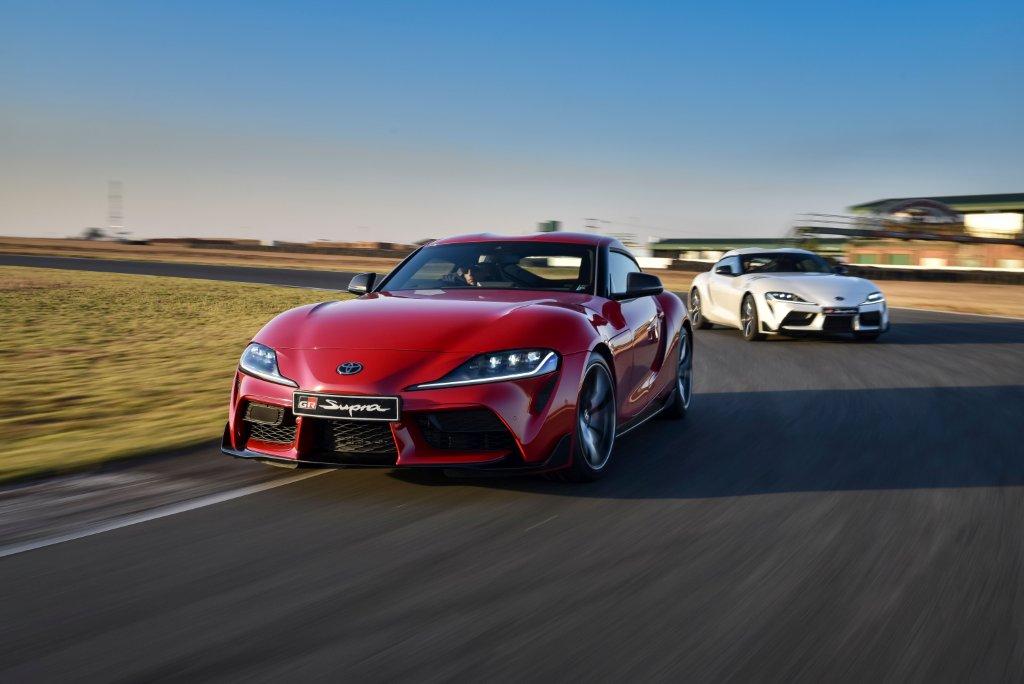 The Toyota GR Supra was conceived as a sports car in its purest form, with no compromise that might diminish the pleasure of the driving experience.

Chief Engineer Tetsuya Tada has adhered to the classic form of a front-mounted, straight-six engine driving the rear wheels, building on the heritage of Toyota’s past Supra generations and original 2000GT sports car.

Driving enthusiasts can expect an exhilarating blend of power, agility and precision handling, delivered by the car’s combination of a short wheelbase and wide track, low centre of gravity as well as a lightweight and highly rigid body.

The 3.0-litre engine is fitted with a single twin-scroll turbocharger and produces 250 kW and 500 Nm of torque. Coupled to an eight-speed automatic transmission, it is characterised by smooth and powerful acceleration, with large amounts of torque available across the full spectrum of engine speeds.

Toyota Gazoo Racing was instrumental in honing the new sports car’s performance, working extensively on the famous Nürburgring Nordschleife and surrounding roads in Germany to achieve the most agile, stable and rewarding handling possible. Further extensive testing was carried out on roads around the world.

To be certain that the car delivered on its promise, Toyota President Akio Toyoda put it to the test at the Nürburgring in his role as a Master Driver before giving it the final green light.

Its work is based on three pillars: developing people through participation in motorsport; creating fans through the excitement of motorsport; and applying the knowledge gained from motorsport to make ever-better, fun-to-drive cars for the road.

This ethos was fully embraced by Kiichiro Toyoda, the founder of Toyota’s car-making business, and is shared today by Akio Toyoda, to support the company’s commitment to make ever-better cars.

Starting with the Toyota GR Supra, Toyota Gazoo Racing will transfer the technical learnings it gains from the racetrack and rally stage to the development of new generations of Toyota’s sports-focused GR models and also its wider range of vehicles, driven by tens of millions of people around the world.

Tetsuya Tada, Chief Engineer of the Toyota GR Supra, gives his personal insight into the project and what he aimed to achieve with the new car.

“Being asked to make a sports car that offers the ultimate, pure driving pleasure felt like a mandate from heaven, telling me to “make a Supra!” The

GT86 helped broaden the scope and appeal of Toyota’s sports cars. Next, I needed to deliver a car that offers a seemingly limitless sense of control, a car that will meet expectations and delight even hardcore fans.

“In making Supra, I insisted on visiting enthusiasts’ clubs around the world to talk to owners of previous models. I asked them what they thought the minimum requirements should be and the response was always “a straight-six turbo and front engine/rear-wheel drive configuration”. It was pretty clear and I had more or less anticipated this. The key point was to keep that combination intact.

“The new Supra is not simply a revival, though; only those core engine and rear-wheel drive elements have been carried over. As the name Supra suggests, I was determined to deliver a “supreme fun-to-drive” car that could only be made in the modern era. I repeatedly told the development team that I wanted them to hone any aspects of the car that stimulate the driver’s senses or instincts. I said that it wasn’t necessary to achieve perfect scores for every aspect, we just need to make sure the car is fun to drive. Anything that goes against that can be disregarded.

“It was a key factor to make the car a two-seater. Driving quality is 90 per cent dictated by a car’s basic packaging – the track and wheelbase are particularly important. In fact, it’s the golden ratio (~1.5) between these two dimensions that delivers the best driving quality, and I was determined not to sacrifice this. But the only way to achieve the golden ratio was to make Supra a two-seater. Even though I was warned not providing four seats would reduce the number of cars we might sell, I politely but firmly stood my ground. For me, it was all about delivering a pure sports car with the ultimate driving pleasure.

“With the new Supra we did everything that could be done with front engine/rear-wheel drive packaging. For example, the speed through a slalom course is about 20 per cent faster than our original target time. And it’s not just a fast car, it’s exhilarating.

“The auto industry is said to be undergoing a “once-in-a-hundred-years” revolution. Technological innovations such as EV (electric power), autonomous driving and Artificial Intelligence are turning the car into a high-tech “mode of transport”. With that being the case, cars might no longer need to be fun to drive. But I am not sure we should just accept the impact this is having on the role of the car. In that sense, Supra might be the antithesis of society’s current car-related trends,” said Tada.

“Of course, an EV can also be developed as a sports car, and we already have racing categories such as Formula E. Electric motors may in fact offer faster acceleration than petrol engines, but that’s just a matter of specifications. Surely acceleration won’t be exhilarating if you disregard the feeling and resonance with the driver’s senses. When it comes to feeling, I can confidently declare that the acceleration from the Supra’s straight-six turbo feels truly exhilarating. I am sure people who have never known, or have forgotten about the pleasure of driving a car, will enjoy an amazing experience and realise that cars really should be fun to drive. Even at first glance, it’s clear to see how Toyota’s sports car heritage is referenced in the design of the Toyota GR Supra. The influence of the landmark 2000GT is particularly evidenced in the long bonnet, compact body and double-bubble roof, while the distinctive look of the fourth generation Supra is captured in both the front and rear styling – notably in the muscular rear wings and the arc of the integrated spoiler, ” Tada said.

The resemblance is more than skin-deep, though, as the Toyota GR Supra has the same classic sports car format of a powerful, front-mounted six-cylinder engine and rear-wheel drive as its celebrated predecessors.

The Toyota GR Supra’s design theme was first previewed in the dramatic FT-1 concept car, styled at Toyota’s CALTY studio in California and revealed in 2014 at the North American International Auto Show in Detroit. Toyota GR Supra Chief Designer Nobuo Nakamura gave his team a simple brief, purposely avoiding any emotive words so that they were free to express their vision of a pure and individual sports car in a truly original design.