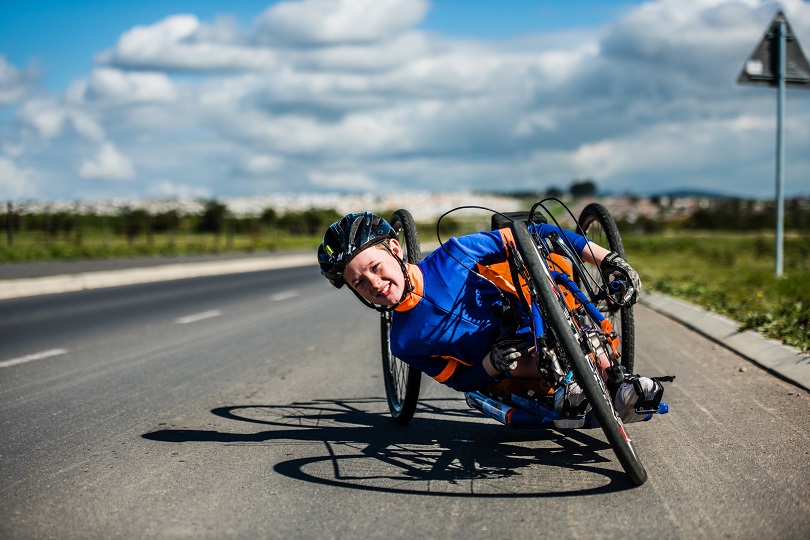 He is the youngest hand cyclist in South Africa, has won Gold in the Outeniqua Wheelchair Challenge three times, ridden the Cape Town Cycle Tour Junior and written himself into the record books when he rode the Momentum Knysna Cycle Tour 50km in 2018. He also participated in the 94.7 race and did 50km of the route by special arrangement.

Zach was born with Gastroschisis, a condition where the bowels develop outside the baby’s body.  Corrective surgery shortly after birth lead to complications which ultimately left him paralyzed from the waist down.

Although he was confined to a wheelchair, like most little boys, Zach wanted a bicycle.

This got dad, Geoff, also an active sportsman thinking.

“Unfortunately, you can’t just walk into a shop and buy one, so (four years ago) we made him his first one out of two steel BMX bikes, very much a sit-up type.”

“Two years later, because he had grown so much, we made him a proper race bike. You can get bikes out of the USA or UK, but they cost between R 60 000 and R 200 000, and each one has to be custom-built for the athlete’s disability. It took us five months of late nights and hard work to finish his bike, using pictures and dimensions downloaded from the Internet, but now he is flying. I think he likes cycling because it gives him freedom. He loves the speed – going downhill we have seen his bike do 50km/h, but I start getting a bit nervous – and he also just loves riding through puddles of water,”  Geoff told Modern Athlete.

With the increased physical activity, Geoff reports that they are seeing changes slowly starting to happen to Zach’s body.  He is experiencing feeling in places where previously that had not been the case.  Nobody really knows why, but Geoff suspects it’s a result of Zach’s increased cardiovascular activity.

After obtaining permission to compete in the 50 km Knysna Cycle Race 2018, Zach completed the race in 4 hours and 1 minute.  He was ‘boxed in’ for safety throughout the race by dad Geoff and Shaun Weber, and a backup motorcycle in case of technical failures.

Justifiably proud of his son, Geoff says that “Zach has a never-say-die attitude and is scared of nothing. He swims, scuba dives, rides a quad bike, flies radio-controlled planes, and is a very happy little boy. He never wakes up in a bad mood and is always smiling. He wants to go to the Olympics one day, and riding Knysna will hopefully be a big step towards that,” Geoff added during the Modern Athlete interview.

Like all kids he plays computer games and is supercomputer literate,” says his proud father.

Zach has become a firm crowd favourite at the OCC since astounding the crowd during his first race as a ten-year-old and is looking forward to competing again this year.  He will be riding a smaller version of the handcycle that Ernst van Dyk competes in.  The new cycle weighs only 15 kg (as opposed to the 24 kg); something that will most certainly allow Zach to significantly reduce his time.

“Getting the medals and passing other athletes in the race were the best parts of the OCC,” Zach told the George Herald after last year’s race.

Apart from the George Municipality, Lancewood and the Department of Cultural Affairs & Sport is supporting the event.  Halfway Toyota is the venue host for the event.

Apart from the George Municipality, Lancewood and the Department of Cultural Affairs & Sport is supporting the event.  Safari is a product sponsor for the event.