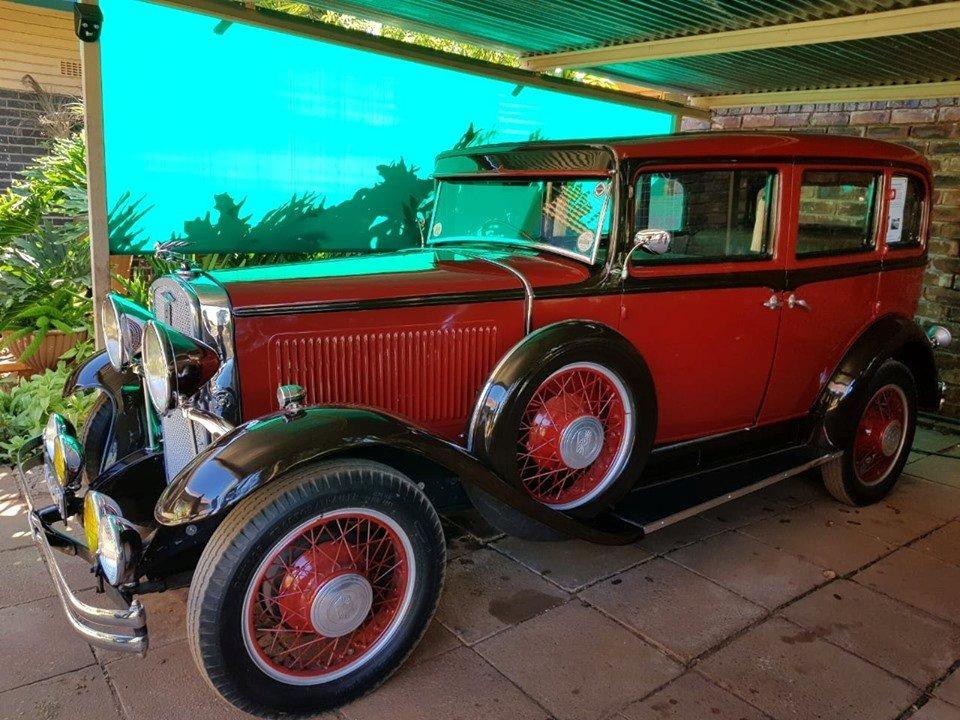 Brian Joss – The annual classic car spectacular organised by the Pretoria Old Motor Club will take place on Sunday August 4, when collectable cars of all descriptions will make their way to Zwartkops Raceway, west of Pretoria, to  start filing through the gates from 6 am.

“We encourage owners exhibiting their classic cars to arrive as early as possible. The gates for classic cars will be open from 6 am, while paying spectators will be allowed access from 8 am,” says Frik Kraamwinkel, the POMC’s chief organiser for this mammoth annual event.

This year will see the 39th running of Cars in the Park. The first event took place in Silverton, attracting some 15 cars. For the past few years up to 3 000 classic, vintage and veteran and other specialist collectable cars have filled the Zwartkops race track.

The show caters for motoring enthusiasts from all ages.

For instance, at this year’s event, the Special Invites in the pit area will include a 1903 Peugeot, a tiny single-cylinder car not much bigger than a motorised lawn mower. It is believed this is just one of four such baby Peugeots in existence, and the only one in Africa. It is owned by Allie van Jaarsveld of Johannesburg.

At the other end of the time scale, Lazarus Ford of Centurion will be showing the latest Bullitt version of the Ford Mustang. This metallic green beauty was specially built based on the latest Mustang to commemorate the 1968 Mustang GT used in the film Bullitt, which features one of the most famous car chase sequences in cinematic history. Steve McQueen drives the Mustang 390 GT and a bunch of “bad-guys” chase him and get chased in a Dodge Charger.

A highlight for two-wheel enthusiasts will be the display of vintage motorcycles at this year’s Cars in the Park. Many of these machines are veterans of the famous DJ Vintage Motorcycle run for motorcycles built before 1936, an annual run from Durban to Johannesburg that commemorates the original road race held between the two cities prior to World War Two.

There will be a number of Dodge Chargers on display at Cars in the Park this year, as the Chrysler brand, or “Mopar” as it is known amongst hard-core enthusiasts has been enjoying increasing popularity amongst the muscle car fraternity.

Muscle cars, hot rods, classics from Britain, Germany France, Sweden – the list simply goes on and on at Cars in the Park, which this year has attracted some 120 car clubs to the event.

A rare car that is listed amongst the special invites is the 1931 Nash Tourer that is travelling all the way from Potgietersrus in Limpopo.

The Pretoria Old Motor Club will also be displaying just some of their membership’s vast array of beautiful classic, vintage and veteran cars. One of these will be Emil Kuschke’s Ford Model T which is over 100 years old, while a dramatic salmon pink 1955 Ford Thunderbird belonging to Albert Etsebeth will also be making a welcome appearance.

A very unusual car on display will be the newly-restored Seat Abarth 750 GT, owned by a POMC member. This car is very similar to the Fiat Abarth 750 GT, based on the Fiat 600 of the mid-1950s to the early 1960s. Abarth was the special tuning firm specialising in Fiats, but Seat Abarths (the Spanish-built version of the Fiat) are a rarity indeed!

The Franco Scribante Racing collection will also be a huge attraction for spectators young and old in the pit area.

A huge contingent of giant 4X4 Unimogs is again expected at Cars in the Park, as are a collection of similarly huge Volvo military-orientated off-roaders from a bygone era.

Other rare cars will include first series Lotus Elans, Morgans, Jaguar XK150s and E-Types and a massive display of classic Mercedes-Benz cars from the Mercedes-Benz Club. Always popular are the Microcars from the 1950s, including Messerschmitts that resemble miniaturised World War Two fighter planes on three wheels, and the “take-home cute” Isetta BMW-engined bubble cars.

Expect to see Minis by the dozen at this year’s Cars in the Park. Mini is celebrating its 60th anniversary in Cullinan on August 24 and 25. Another car celebrating a birthday is the Ford Capri, and this year will be its 50th birthday. Cars in the Park traditionally draws a number of achingly original Ford Capri Perana V8s, so keep an eye out for them.

The Cars in the Park regularly attracts upwards of 10 000 paying spectators, and a fun day will be in store for everyone. Admission prices are R100 for adults while children under 12 gain free admission.

There will be dozens of stalls selling clothing and car-related goodies, as well as plenty of food and drink. Open fires are not allowed on the infield at Zwartkops,but classic car enthusiasts displaying their cars are permitted to bring gas braais and cooler boxes for their day in the sun.

For more information visit: http://www.pomccitp.co.za/. Cars in the Park is also on facebook.