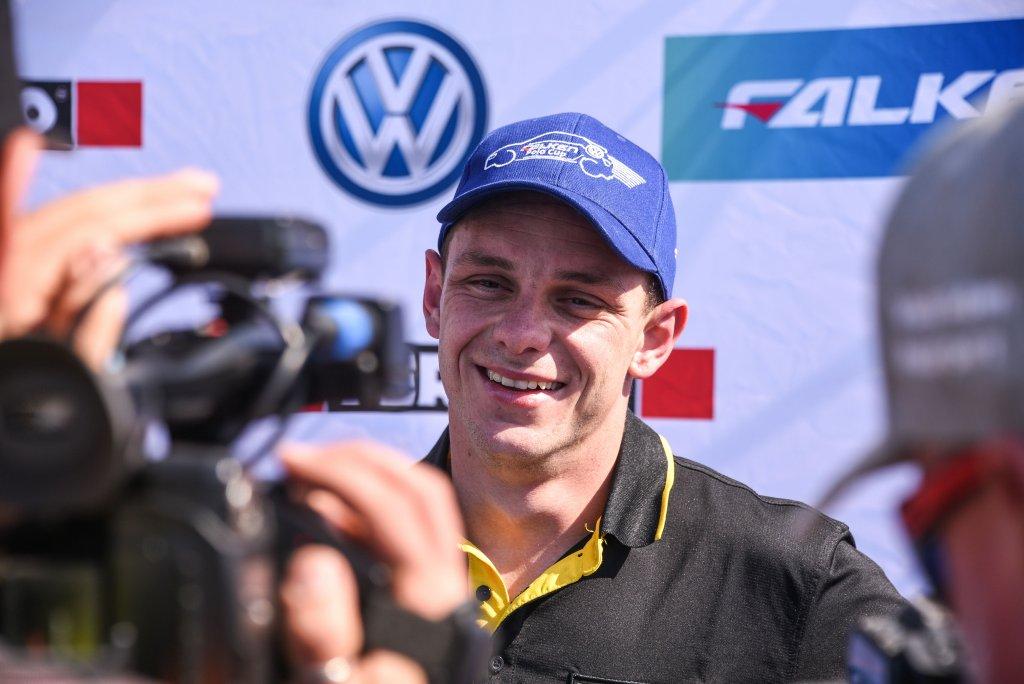 Brian Joss – To say that South Africa’s most successful circuit racing series provides a racing spectacle at each circuit that it visits has become somewhat of a cliché.

To prove the point, the winning margin of Round 5 of the Falken Polo Cup after two 10-lap races around Pretoria’s Zwartkops circuit was a mere two tenths of a second.

Before the start of the weekend’s action, all eyes were on the battle between defending champion Jeffrey Kruger and Bradley Liebenberg. The two rivals were tied on 125 championship points with both looking at Zwartkops as an opportunity to break the tie. Kruger had the best start to the season, but the momentum had swung in Liebenberg’s favour in recent races but the series had another surprise waiting. 2017 Polo Cup champion Devin Robertson made his return after sitting out in 2018.

It was clear from the first few practice sessions that Robertson hadn’t lost any of his driving skills as he was on the pace from the word go. After the initial qualifying session, people weren’t really surprised to see his name on top of the standings. The top six then went into the super pole qualifying session which would determine the grid for the first of the day’s races. Campos brother Keegan Campos set the sixth fastest time and was beaten by Clinton Bezuidenhout and Jeffrey Kruger who could only manage fourth. One of the Shorter brothers in the form of Chris put his Polo in third, which meant that the showdown for pole position was going to take place between Robertson and Liebenberg. It was Robertson who announced his comeback with the fastest time, around 0.3 seconds ahead of Liebenberg.

This set the tone for race one which had to be stopped after a first corner incident that put an end to young Karah Hill’s weekend. After the restart, it was Robertson who made the most of his pole position by quickly slipping away from the opposition with Liebenberg in hot pursuit. Keegan Campos emerged from the rest of the pack to get himself into third, and that’s how race one finished. Capetonian Dario Busi was fourth ahead of Jason Campos and Justin Oates with Jeffrey Kruger handing over the championship lead to Liebenberg with his seventh place finish. Needless to say, Robertson was pleased with his victory. “It was a bit of a cat and mouse game between myself and Bradley. Each time one of us used our push-to-pass, the other one countered so the gap remained pretty stable. But I couldn’t have asked for a better return to the sport,” he said immediately after the race.

So the stage was set for an even bigger fight in race two. This time, it was Liebenberg who could start from pole after drawing number one in the all-important race two starting order draw. Robertson drew number five which meant that he would have to fight his way through the field which is exactly what he did once the lights turned green. It took him a few laps to work his way past the Polos of Chris Shorter, Jeffrey Kruger and Keegan Campos which provided Liebenberg with the breathing space he needed at the front of the pack. Robertson then set off to try and catch the car of Liebenberg but when the flag was waved, he was still 1.3 seconds back. Liebenberg’s win however further cemented his position at the top of the points table. When the times from both races were added to reveal the overall results, it was Robertson who emerged as the overall winner with a gap of just 0.2 seconds over Liebenberg. Keegan Campos got third overall after a good day behind the wheel while Kruger tried to minimize the championship points damage with a fourth overall ahead of Jason Campos and Dario Busi.

“Devin made it very clear that he’s here to win,” said Liebenberg at the end of the day’s racing. “Fortunately my fight is still with Jeffrey for the championship so that is where my focus will be for the upcoming races but either way we are all going to have great battles going forward.”

“The weekend once again proved how exciting Falken Polo Cup Racing can be,” commented Mike Rowe, head of Volkswagen Motorsport. “It also showed what a talented driver Robertson is by claiming a win in his comeback race. Fans are in for a treat over the remaining three rounds,” he concluded.

The next round will be held on the tarmac of the East London Grand Prix circuit, a track which is renowned for providing even more spectacular racing thanks to the fast nature of the circuit. The battle for Falken Polo Cup glory will continue on 30 and 31 August.