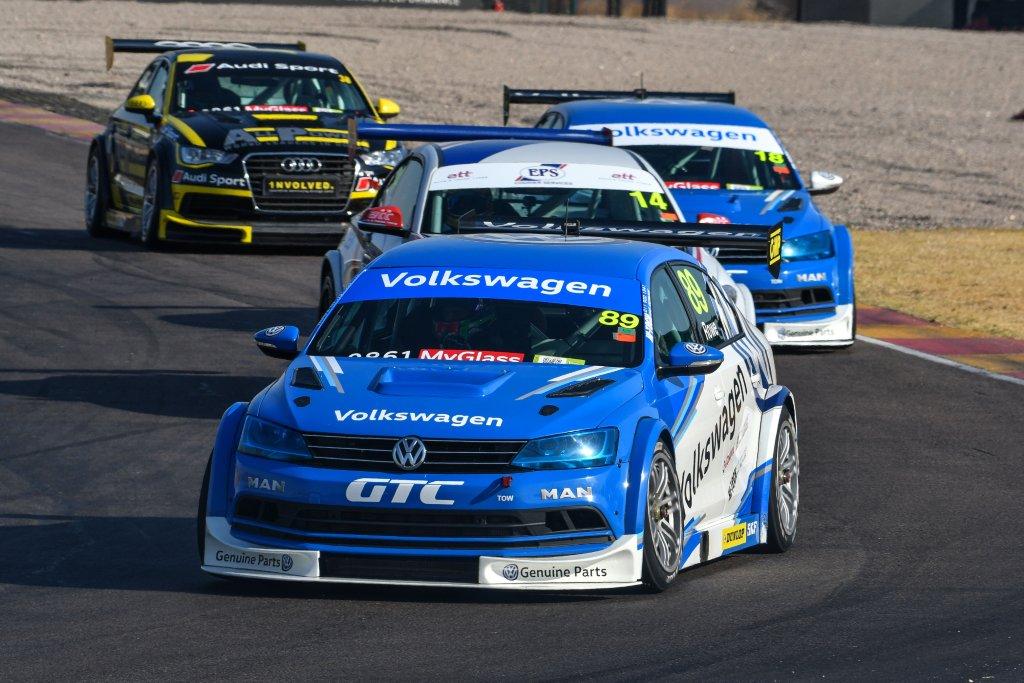 Brian Joss – The second half of the premier Global Touring Car Series  was held  at Pretoria’s Zwartkops Raceway this weekend where a number of teams competed for both individual as well as team glory.

After two hotly-contested races, the team from Volkswagen Motorsport walked away with a podium finish in race one, but more importantly increased their advantage on the points table for manufacturers while both drivers remain in the hunt for overall championship glory.

Team drivers Keagan Masters and Daniel Rowe came into Round 5 of the GTC championship occupying second and third on the drivers’ points table respectively, so the pair had every intention to fight for victories and close the gap to Audi’s Simon Moss in the process. Times during Friday’s free practice sessions suggested that it was going to be a competitive weekend with most of the GTC field separated by only fractions of a second.

As drivers and teams are usually reluctant to show all their cards during practice, qualifying is often the first real indication of what the weekend will yield and Round 5 at Zwartkops was no different. At the end of the 15 minute session, Keagan Masters managed to pip his teammate Daniel Rowe by a mere 0.01 seconds, but the pair managed to put both their Jettas on the second row, just 0.2 seconds behind pole setter and championship rival Simon Moss.

When the lights turned green to signal the start of the first race, both Masters and Rowe were quick to make a move and gain a position or two as they chased down the leader. With only two laps to to go, Masters and Rowe were in a comfortable second and third position and breathing down the neck of the race leader when Rowe was forced wide in turn four while overtaking a

GTC2 car. He managed to maintain control, but lost a position and a podium finish in the process. “Keagan and I were set to occupy two steps on the podium,” commented Rowe after completion of the first race. “We came close, but it wasn’t to be.” Masters was equally positive about the Jetta’s

performance: “I’m still chasing my first victory since moving to the premier GTC class and at the same time trying to fight for the overall championship,” he said after finishing second in race one.

The reverse grid for race two placed Masters near the back of the field while Rowe had to work hard in the traffic up ahead. In the end, most drivers were evenly matched making it very difficult to gain positions.

Rowe’s Jetta was the fourth car across the line closely followed by the sister car driven by Masters. “As a racing team we always aim for victories,” commented Mike Rowe, head of Volkswagen Motorsport. “Today it simply wasn’t possible but we’re still satisfied with the overall results.

As a brand we are still at the top of the standings and both Daniel and Keagan took some points away from championship leader Simon Moss by finishing ahead of him in race two.”

Behind the GTC cars, GTC2 points leader Bradley Liebenberg and Volkswagen teammate Adrian Wood were not quite having it their own way. In an effort to level the playing field, the organisers have implemented a handicap system that sees both Golf GTi’s of Liebenberg and Wood carry extra weight and breathing air through restrictors, severely hampering their overall performance and pace. The results were immediate with the official Volkswagen Motorsport Golf GTi’s failing to qualify first or win a race for the first time this season. Liebenberg drove hard to record a second and fifth place respectively, while teammate Wood claimed a third and a fourth in the two races. “The combination of carrying extra weight combined with less power under the bonnet simply means that we couldn’t keep up,” said Liebenberg after the day’s racing. “It not only affects our straight line speed, but also impacts negatively on the car’s handling and stopping abilities.” Teammate Wood agreed: “It’s a little frustrating to see the competition driving away from us, but at least Bradley and I are still first and second in the championship and we’ll give it our all to defend our positions over the remaining events.”

The next stop for Volkswagen Motorsport in the Global Touring Car series will be the famed and fast East London Grand Prix circuit with its infamous Potter’s Pass and Rifle Bend. Round 6 of the series is scheduled to take place on 30 and 31 August. “The season is slowly drawing to a close. From here on in every lap and every race will count so as a team we will be more prepared than ever,” concluded Mike Rowe.

CAPTION: Round 5: clean racing during  the GTC at Pretoria’s Zwartkops Raceway. Picture: Quickpic