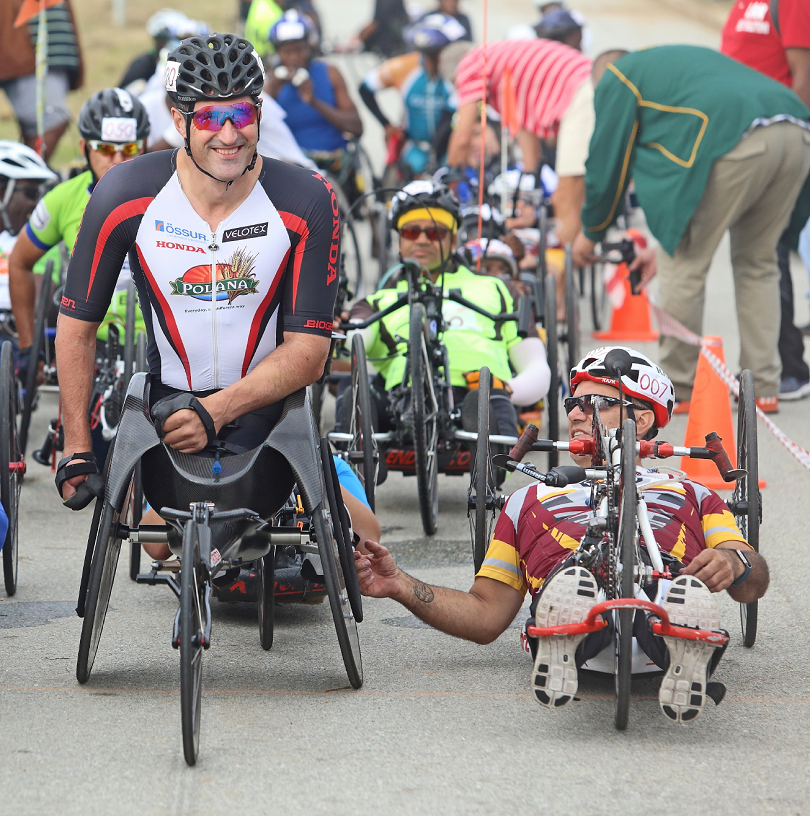 George, Garden Route – July 2019.  Ernst van Dyk is probably the best known and most-watched athlete in the history of the Outeniqua Cycle Challenge.  He has been the star attraction and has been instrumental to the success of the event.  For that George and the OCC is eternally grateful.

Ernst was born with congenital absence of both legs.  His parents, two provincial-level athletes, recognized his athletic abilities and encouraged sports participation.

“I thought I was given a disability to overcome and that was part of my process of growing up and how the Lord wanted to teach me to be a better person. I realized He had given me a talent to perform well on the world scene, to inspire people and to make people realize that when they think there is no way out, that there is actually a way out,” he told Beyond the Ultimate in 2012.

While at school in Kimberly, he competed as a swimmer nationally in his teens.

In 1992 he began his studies at Stellenbosch University and competed in the Barcelona Paralympics as a swimmer and wheelchair athlete before concentrating on wheelchair athletics as a 17-year-old.

In spite of all of his sporting success, Ernst believes that his biggest achievement is being the first disabled person to graduate with a degree in Sports Science.

The cheering crowd at the athletics track in Barcelona persuaded him to concentrate on wheelchair racing, but after the Games, he lost his sponsorship.  “It felt like being fired from the job,” he said at the time, “I quit training for nine months until I reminded myself of a commitment I made to my father.”

Since then Ernst has competed in every Paralympics to date.  He won numerous silver and bronze medals along the way before finally winning gold in Beijing in 2012.

Ernst has won a record 10 Boston Marathons, including six straight between 2001 and 2006.  The ninth, in 2010, was a record for that event for any class.  Apart from Boston, he has won the New York City Marathon and the Los Angeles Marathon twice as well as the Paris Marathon and the Great North Run.

The South African government has also recognised Ernst’s contribution to sport.  He received the Presidential Golden award for sport in 2002 and 2004.  In 2010 he was awarded the Order of Ikhamanga in silver.

Van Dyk’s company, Enabled Sport, deals in equipment for athletes with disabilities. He lives in Paarl with his wife and daughter.

Apart from the George Municipality & George Business Chamber, Lancewood and the Department of Cultural Affairs & Sport is supporting the event.  Halfway Toyota is the venue host for the event.