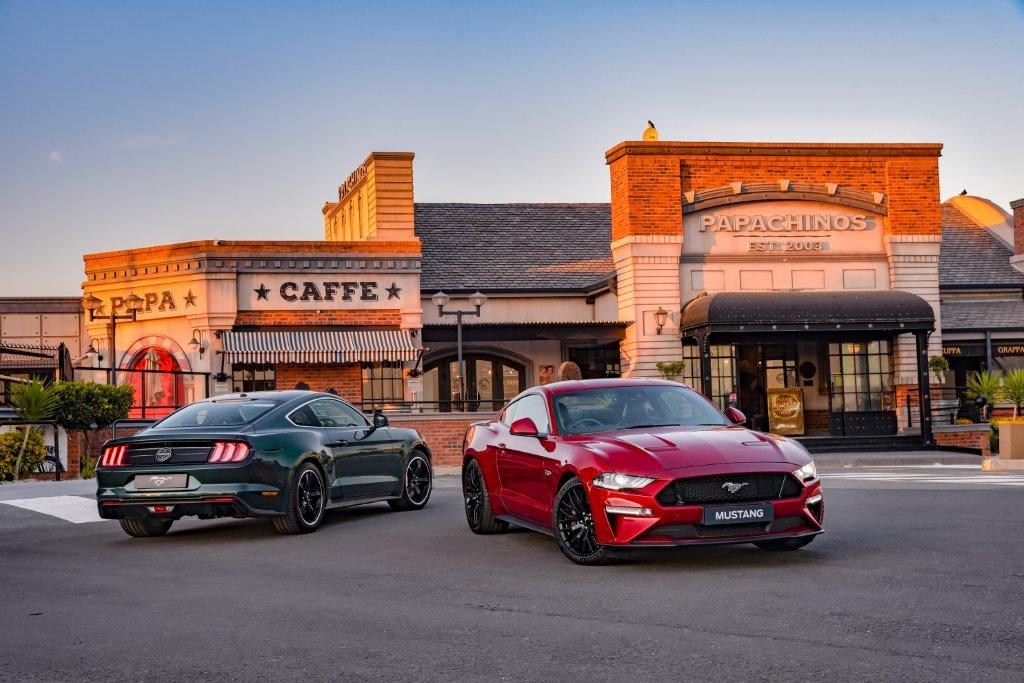 “The passion for Mustang is stronger than ever, proven by this legendary model’s unrivalled dominance of the sports car segment globally, which has made it one of the most iconic sights on local roads since it first went on sale in South Africa in 2016,” says Doreen Mashinini, General Manager, Marketing at Ford Motor Company of Southern Africa (FMCSA).

Adding further appeal to the new range is the special edition Ford Mustang Bullitt that will be available at launch, paying homage to the Mustang GT fastback that featured in the legendary 1968 Warner Bros. film starring Steve McQueen.

Offered in classic Bullitt-exclusive Dark Highland Green or Shadow Black, along with a range of unique styling and feature enhancements, only 50 units of the stunning Mustang Bullitt will be available, powered by an uprated 338kW version of Ford’s 5.0-litre V8 that delivers enhanced performance and a more engaging driving experience thanks to the fitment of a six-speed manual gearbox.

The exterior of the new Ford Mustang delivers a sleeker, more athletic appearance while retaining the instantly-recognisable character honed through more than 50 years of production. The bonnet profile is now lower with integrated air vents, combined with a revised lower grille design to give the Mustang a sharper, more aggressive face, while improving aerodynamics.

The Mustang’s dramatic rear-end design is further enhanced with a re-modelled bumper and diffuser element, accommodating standard quad-tailpipes for the 5.0-litre GT model that testify to the power and performance available.

The new Mustang interior delivers a more premium feel. Soft touch materials now feature for the door linings and the door handles are finished in aluminium.

Leather-trimmed, heated and cooled seats are provided in conjunction with six-way electric adjustment for maximum comfort.

Exhilarating performance and a fun-to-drive experience have been at the heart of the Mustang’s DNA since the first model was launched in 1964. New powertrain, chassis and technology enhancements enable the new Mustang to deliver the most rewarding driving experience yet.

Ford’s 5.0-litre V8 engine has been further developed to deliver more power and a higher rev-limit than ever before. Peak power climbs from 309kW on the previous model to 331kW, with an accompanying torque peak of 529Nm supported by the introduction of Ford’s new high-pressure direct injection and low-pressure port fuel injection system which improves low-end torque.

The more fuel-efficient 2.3-litre EcoBoost petrol engine delivers 213kW and 441Nm of torque – an increase of 11Nm. The revised engine offers a more responsive and engaging driving experience thanks to a transient overboost function for the turbocharger – triggered under heavy acceleration to provide an extra burst of boost following each up-shift.

Ford’s pioneering 10-speed automatic transmission is standard across the range – except for the Mustang Bullitt – and uses an electronic control system which enables settings that optimise performance for Drive Modes.

Real-time adaptive shift-scheduling allows the transmission to adapt to changing conditions and select the right gear in any situation. Steering wheel-mounted paddle-shifters give drivers maximum control.

New Active Valve Performance Exhaust technology means drivers can for the first time adjust the intensity of the Mustang’s exhaust note to suit their mood and the driving scenario. The innovative Good Neighbour Mode can be programmed to automatically limit the exhaust’s noise output at pre-programmed times of the day to avoid disturbing neighbours, not least when firing up the legendary 5.0-litre V8 early in the morning.

Ford engineers have further optimised Mustang’s driving dynamics to deliver the most engaging driving experience yet. Recalibrated shock absorbers improve stability through corners, and the rear suspension is stiffened with a cross-axis joint that reduces unwanted movement at each corner, which can lead to body flex. Thicker anti-roll bars also better control body-roll for sharper handling.

Smart tech for safety and convenience

The new Mustang also features Ford’s SYNC(r) 3 communications and entertainment system, which allows drivers to control their connected smartphones, audio, and climate functions with conversational voice commands, and by using pinch and swipe gestures on the central 8-inch touch screen. The system is compatible with Apple CarPlay and Android Auto(tm).

Embedded navigation is also standard on the Mustang range.