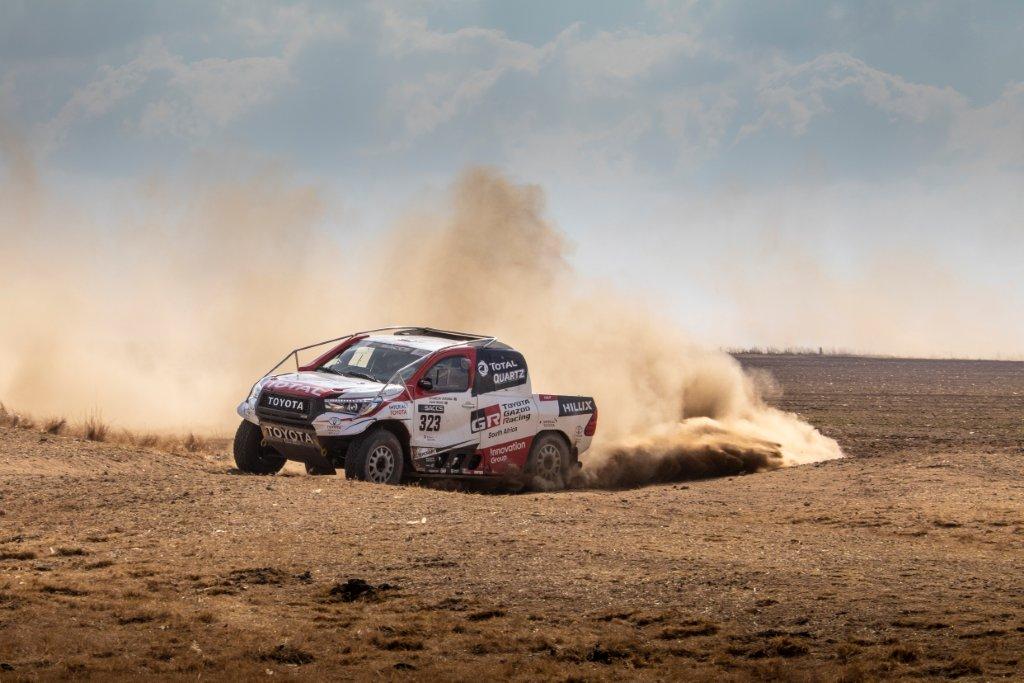 Brian Joss – It was a dream result for Toyota Gazoo Racing SA’s Henk Lategan at the Bronkhorstspruit 400, Round 4 of the 2019 South African Cross-Country Series (SACCS) this weekend.

The Toyota Hilux driver won the race overall, echoing his result from 2018, when he achieved his maiden cross-country victory at the same event. This year, however, he was partnered with navigator Brett Cummings, while Barry White read the notes last year.

Lategan/Cummings’ victory, in a time of 4hrs 37min 15sec, was the cherry on top of a class performance by various Toyota crews in Bronkhorstspruit.

“I’m not sure if I missed the call, or it just didn’t register, but I arrived at a rough section early in the loop way too fast,” said the defending champion after the dust had settled over the qualifier. “We hit a rock at pace, breaking the wishbone on the left front suspension. We couldn’t continue, and were forced to start the race from the back of the grid.”

The pair set off as the 19th production vehicle on the road, and had to deal with the dust from a lot of slower cars as well as special vehicles over the course of the route. Despite this, De Villiers/Murphy moved up ten places to finish 9th overall, and bagged some points in the process.

“It was hardly the result we needed at this point,” said De Villiers after the race. “But at least we managed to salvage something, and the Hilux ran absolutely perfectly today.”

The honours in Class T went to the Ford Ranger crew of Lance Woolridge and Ward Huxtable, who continued their unbeaten run for the season. They were kept honest throughout the race by Gary Bertholdt and Geoff Minnitt in their Atlas Copco Toyota Hilux, who eventually finished just 24sec behind the class winners. Brothers Johan and Werner Horn chased hard throughout the race, but posted a time 59sec slower than that of Bertholdt/Minnitt to secure third place.

“Overall it was a great weekend for Toyota,” said Toyota Gazoo Racing SA Team Principal, Glyn Hall. “Sure, it was disappointing for Giniel and Dennis, but the rest of the crews did us proud, and we are certainly pleased with Henk and Brett’s win.”

The next round of the 2019 SACCS is the Harrismith 400, which is set to take place on 13 and 14 September. However, Toyota Gazoo Racing SA will be turning their attention to the Dakar Rally, with a test session planned for later in August.