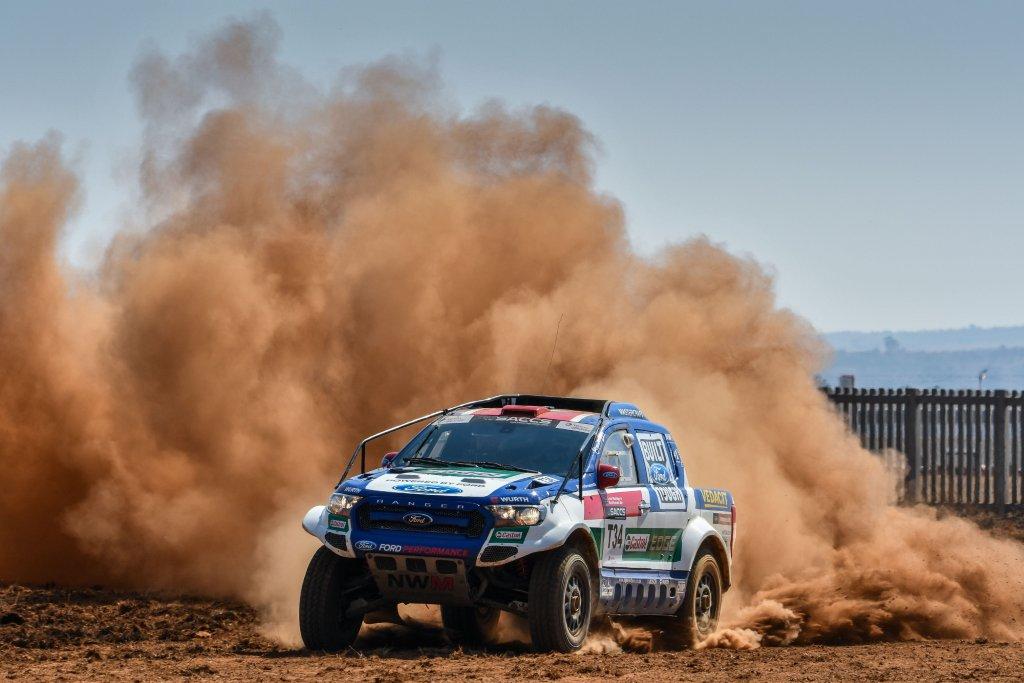 Brian Joss – The dream season continued for the Castrol Ford Cross Country Team of Lance Woolridge and Ward Huxtable (T34) when they won their fifth race in a row of the 2019 South African Cross Country Series (SACCS) at this weekend’s Bronkhorstspruit 400.

The reigning Class T champions qualified sixth fastest during Friday’s 66km prologue in their Neil Woolridge Motorsport (NWM) built and run Ford Ranger, after a cautious initial outing in the extremely dry and dusty conditions that are typical of the Highveld in winter.

Proving just how competitive the field is, the KwaZulu-Natal duo were within 28 seconds of the second-placed team, which set the scene for a thrilling main race on Saturday.

However, they were imperious in the main event, and surged to the front of the Class T field on the first 172km loop with a much quicker pace than their rivals, with several of them losing time due to punctures.

Setting out on the second loop, Woolridge and Huxtable held a 52-second lead over Johan and Werner Horn (Toyota). Despite the best efforts of the Horn brothers, who eventually finished third, and runners-up Gary Bertholdt and Geoff Minnitt (Toyota), the Ford Ranger crew never put a foot wrong and retained their lead through to the finish of the race with a faultless drive that further extended their advantage at the top of the championship table.

Accordingly, Woolridge and Huxtable have maintained their unbeaten record so far this year in the highly competitive series.

“To get a win like this was fantastic and is exactly what we wanted, but after Friday’s qualifying session we weren’t all that confident, as Lance and Ward were sixth in class and 12th on the road,” said team principal Neil Woolridge. “Lance wasn’t quite himself as he’s had a bit of flu and we’ve been extremely busy at work building new race cars, but he had a good sleep on Friday night and he was on it on Saturday.

“He and Ward had a clean run with no punctures and made no mistakes, and their Ranger was perfect. This is great for the championship with five wins from five races – it can’t get any better than that,” Neil added.

Lance was delighted with the result, despite the less than perfect start.

“We made things difficult for ourselves on Friday, as my head wasn’t in it after the long hours we’ve been putting in at the workshop building a new vehicle for Rally dos Sertoes later this month. But I had a good sleep and reset for the race, and felt good from the outset which set the tone for the rest of the event.

“We passed Johan van Staden when he had a puncture on the first loop, and Jacques van Tonder allowed us to pass without holding us up which was really nice of him. The rest of the loop was clear, and we had taken over the lead when we entered the pits.

“The second loop was hectic, as several of the teams behind us were pushing really hard and making up time. We went as fast as we could on the second half of the lap, and fortunately, it all worked out.”

Team-mates Marcos Baumgart and Kleber Cincea (T20) weren’t as fortunate, as their qualifying stint ended prematurely when they damaged the prop shaft on a hidden rock at the first road crossing just 4.5km into the stage, and were forced to retire.

The NWM technicians replaced the prop shaft as well as the rear differential as a precautionary measure for Saturday, and the Brazilian crew enjoyed a hassle-free run over the 344km race distance to cross the finish line in a commendable eighth place.

“Marcos and Kleber were very unlucky when they hit a rock on the first day,” Neil commented. “But they had a clean run on Saturday, fighting back from the back of the field to finish eighth, so it was a good performance from them.”

Marcos was also pleased to make the finish after failing to complete the qualifying race. “We had a clean run on Saturday without any problems, which made up for our disappointment on Friday. The race was fast and dangerous in places with lots of rocks, so it wasn’t easy to make up time without damaging the vehicle, but we were very happy to reach the end of this tough event.”

CAPTION On target: Lance Woolridge and Ward Huxtable on their way to a fifth consecutive Class T victory. PictureL Quickpic