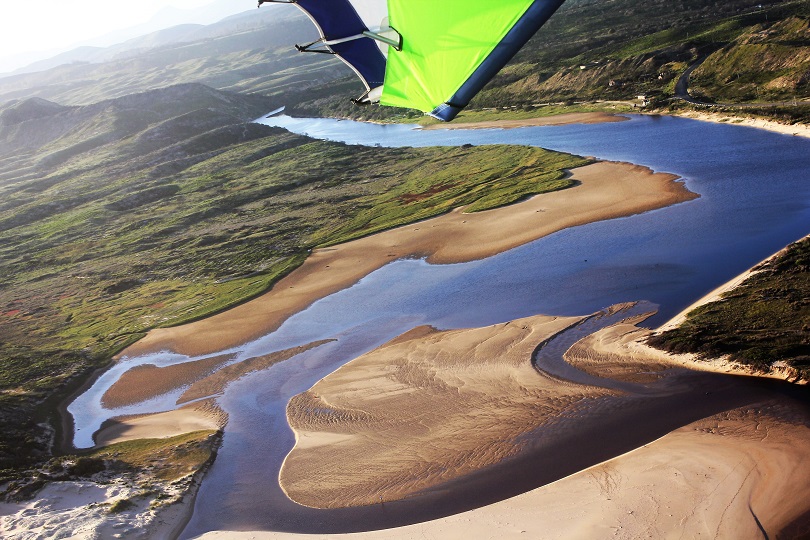 6 August 2019: With its origins high up in the Outeniqua Mountains, the Goukamma River winds its way down a deep ravine down to the Indian Ocean with its large estuary, marine reserve and lagoon near the holiday hamlet of Buffels Bay.

The Goukamma river is one of a few Southern Cape river systems that act as important conservation corridors in an otherwise heavily farmed and developed Southern Cape coastal plateau.

The natural migration of many endangered indigenous plants, aquatic and terrestrial species up and down the Goukamma River depends on a high-quality and healthy environment. Private landowners have an important role to play if the Goukamma River is to remain intact, and a cooperative approach is required between the government and the rural community.

The Goukamma catchment and feeder systems are in places deteriorated by the prevalence and increase of invasive alien plants, and the accumulative effect of these trees and plants is difficult to quantify. However, what cannot be understated is the importance of the Goukamma River in terms of biodiversity conservation and its role as a strategic water source, along with the Knysna, Karatara, Touw and Kaaimans rivers.

Given that much of the Garden Route natural habitat has been dramatically destroyed and altered by agriculture, unchecked human settlement and development, intervention to preserve the natural integrity of the Goukamma River is vital.

The 2017 wildfires in the area badly affected much of the Goukamma River and its feeder systems, and with a resurgence in the prevalence and spread of invasive alien plants on the surrounding landscape, every effort should be made to eradicate and control invasive alien plants where found on private land.

The Southern Cape Landowners Initiative (SCLI), in collaboration with the Table Mountain Fund (TMF) and the Garden Route Environmental Forum (GREF), has joined forces to assist private landowners in their efforts to deal with invasive alien plants, and in the process improve the sustainability and biodiversity conservation capacity of the Goukamma River.

Private landowners suffered severe damages to their land as the result of the 2017 wildfire disaster and often lack resources to curb and suppress aggressive invasive alien plant regrowth that took over large tracts of land in the recent past following favourable rains.

At the same time, the Department of Environmental Affairs (DEA) is taking action against private landowners who allow their land to succumb to invasive alien plants. Departmental officials insist that landowners become compliant in terms of relevant legislation or risk being served with official directives and fined if not strictly adhered to.

As a first step to better land management practice, all private landowners along the Goukamma River is expected to draw up an Invasive Alien Plant Control Plan. Control plans serve multiple purposes, but essentially it serves as a management tool for landowners in developing a pragmatic and sustainable approach in dealing with invasive alien plants.

The drawing up of Control Plans can be fairly technical and costly when making use of environmental practitioners. So, in order to assist Goukamma landowners, SCLI is offering to assist landowners along the Goukamma River in the drawing up of control plans that are of a high standard, and in line with all relevant legislation.

As a public platform for landowners and land managers along the Goukamma River, private landowners are requested and encouraged to join hands with SCLI and partner entities to better manage their land and contribute towards the conservation of the Goukamma River and the environmental integrity of the Garden Route.

Photo: The Goukamma river estuary. Private landowners suffered severe damages to their land as the result of the 2017 wildfire disaster and often lack resources to curb and suppress aggressive invasive alien plant regrowth that took over large tracts of land in the recent past following favourable rains.