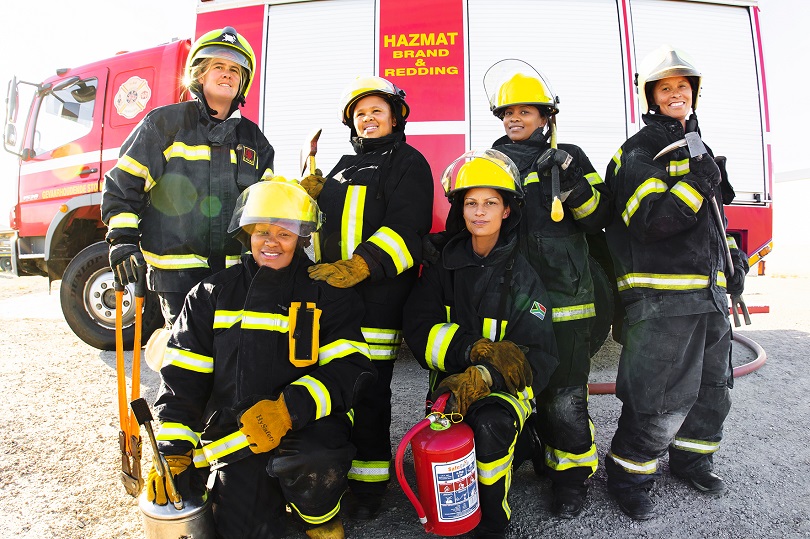 Garden Route District Municipality is home to seven (7) Women Firefighters, who form part of a group of 40 Firefighters (including station officers and fire chief). Although being underrepresented in a male-dominated environment, they are a force to reckon with.

This disproportionately low representation of women in firefighting can be attributed to structural and cultural factors which often play an important role in making the career-choice seem inhospitable to women. Despite this, a “conscious and continuous” attempt by educators, firefighters and parents can help expose youngsters, especially women, to the profession.

INTERVIEW WITH WOMEN FIREFIGHTERS AT GRDM

During an interview with six of the seven women Firefighters at GRDM, who include Ms Bonita Conrad, Ms Kuthala Maki, Ms Odri-Anne Booysen, Ms Devonia Cupido, Ms Elana Basson and Ms Michelle Smalberger, a few assumptions were presented to them.

Assumption 1: Women have to first showcase their knowledge and experience in firefighting before being accepted by their male counterparts.

Assumption 2: There is a sense of pressure on women to do the same or even better than their male counterparts.

When asked what the most important parts of their firefighting jobs are, they agreed that “protecting lives, infrastructure and the environment,” are at the top of their list of reasons.

Nearing the end of the interview, a question was asked with the intent of making them think about their worth and potential. “Would you consider fighting in an all-women team?” One firefighter responded by saying – “we need men by our side to fight fires”. Moments later, one firefighter challenged this response and said: “We will be able to fight a fire on our own. Why are we doubting our own capabilities?” With this moment of truth, interviewees had a moment to think deeply about these misperceptions.

Now the question is why did these powerful women for a moment think that they wouldn’t be able to face a fire as an all-women team? Is it a cultural phenomenon? Something we see on television, hear on the radio or read about in newspapers? What really shapes this perception? This is one of the many questions we have to ask ourselves to break the glass ceiling.

One of the Senior Firefighters, Ms Bonita Conrad, twice over the past few years came out at the top of her age group at the South African Toughest Firefighter Alive Competition.

GRDM has also been dedicated to gender-transformation in firefighting for more than a decade. The District Municipality, in 2006, was the first to appoint a woman Fire Chief in the Western Cape – Ms Annelise Lamprecht-Virtue. She is truly a trailblazer in the field of firefighting. During the October 2018 Garden Route fires she was tasked by the Western Cape Government to assist the district and local municipalities in providing strategic leadership. Her tenure at Western Cape Government as the Assistant Director: Fire and Rescue Services, started in January 2012. Annelise confirmed during a telephonic interview that she will take up a position as Fire Chief at Witzenberg Municipality on 1 September 2019.

Garden Route District Municipality wishes Ms Lamprecht-Virtue all of the best with her future endeavours.

GRDM has three firefighting stations in the region, one in George, Hessequa and Kannaland.

Between 1 December and 31 March GRDM appoints between 12 and 16 temporary firefighters to assist with firefighting operations due to the fire season.