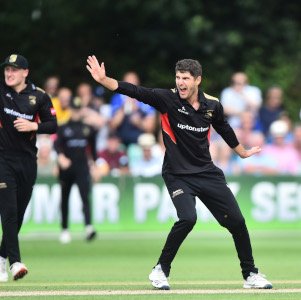 Ackermann, who attended school as Outeniqua Primary School in George where he represented the SWD u/13 team between 2002 and 2004 achieved this record for Leicestershire against Birmingham at Grace Road.

The 28-year old South African born spinner claimed the wickets for Michael Burgess, Sam Hain, Will Rhodes, Liam Banks, Alex Thompson, Henry Brookes, and Jeetan Patel.  His bowling performance enabled the Leicestershire Foxes, of which Ackermann is the captain, a 55 runs victory after dismissing Birmingham for 134- chasing 190 for victory.

Ackermann, clutching the match ball afterwards, told Sky Sports:  “It hasn’t really sunk in.  I am sure I will remember this game for a long time.  I think it’s the first time it’s really turning at Grace Road.  I tried to use my height and get a bit of bounce and wanted to get the batters to hit into the bigger side of the field and mixed up my pace”.

Birmingham captain Patel said:  “You can’t take away from a great display of bowling.  Colin’s spell put them in the ascendancy.

Ackermann who went to Grey High School in Port Elizabeth for his high school education represented the SA Colts,  SA U/19’s, the SA Universities,  Eastern Province and the Warriors.  His brother Travis, a student at the George campus of the Nelson Mandela University, made his debut for the SWD-senior team last season.