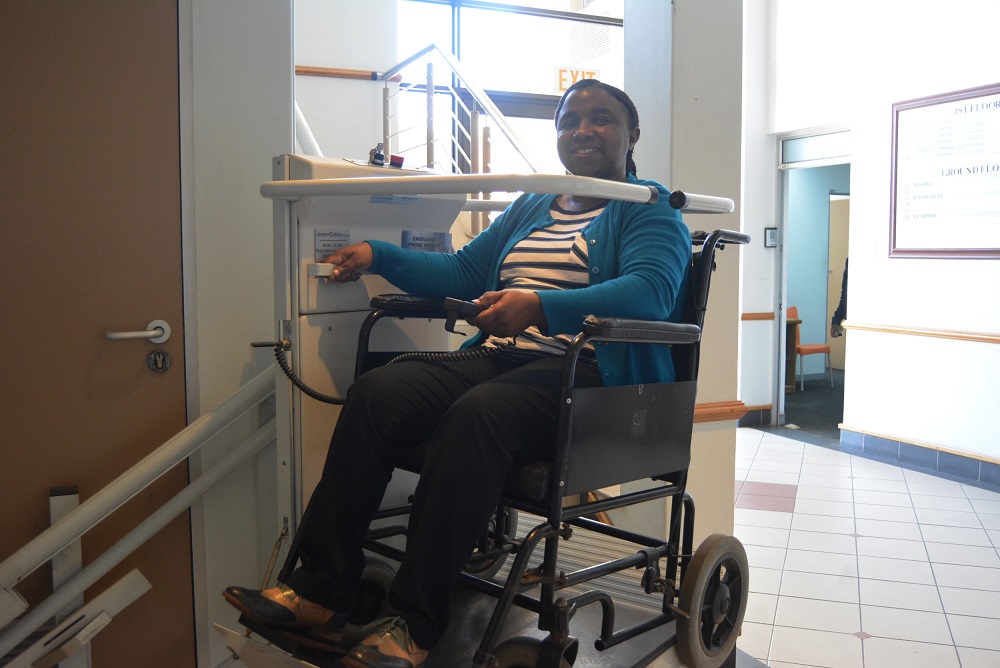 Airports Company South Africa has installed a number of parking options close to the terminal building in Port Elizabeth for passengers who use wheelchairs. Photo: Full Stop Communications

Held in August each year, the initiative is running for the eighth time in 2019 and the Association for Persons with Disabilities Nelson Mandela Bay, which organises the initiative, is targeting a total of 1 000 wheelchairs to have been donated to those in need since its inception in 2012.

Managed by the APD and supported by SPAR Eastern Cape, each Wednesday volunteers from businesses, the municipality and schools are confined to a wheelchair for four hours to experience what those with mobility difficulties confront each day.

The project also raises awareness among businesses in the metro and beyond as to the need to ensure their facilities provide easy access for those in wheelchairs.

Several years ago ACSA put its hand up to take part in the campaign, with Airfield Services Manager Selvin Meyer acting as the assistant to colleague Bulelwa Bloko, who was in the wheelchair.

As they went about their assigned tasks, which included a trip through the airport, Meyer said the first thing that struck him was that there was no access for people living with disabilities to the first floor in the fire station where the Emergency Control Centre staff and their offices were situated.

“This meant that the Emergency Control Centre, based on that level, would have difficulty offering any services to a person living with a disability,” he said.

“That was one of the reasons why we have now moved the ECC to the roof of the terminal building, which has access through lifts, while wheelchair ramps have been created where necessary.”

He added that they went through a number of possible movements around the airport that people living with disabilities would face in the process of catching a flight.

“This included putting Bulelwa onto the platform on the truck called a Passenger Aid Unit which hoists wheelchair-bound passengers up to the aircraft.”

From a passenger point-of-view, Meyer added that they had looked at various aspects to improve facilities and enable easy access for those confined to wheelchairs.

“For instance, we created further parking bays for people living with disabilities in the shaded parking area as close to the terminal as we could.

“This allows those who are assisting them more time to help them out of the car and get them safely into the airport terminal.”

He said the stop-and-go areas in front of the terminals were for dropping off passengers, which could be done within five minutes.

“There is one drop-off area for people living with disabilities adjacent to the stop-and-go section, but we recommend that the shaded parking be used if this parking space is not available.”

Meyer added that within the concourses they had created more ablution facilities with clearly marked signs for wheelchair users.

“We have upgraded these facilities in the arrivals and departures terminals, while we have also created ramps in all sections of the airport to ensure easier access for those with mobility problems.”

ACSA has also considered employees or visitors to its office blocks in terms of accessibility, with a wheelchair stair-lift having been installed at the bottom of the stairs.

Meyer said this allowed those in wheelchairs to be placed on a platform and kept safe with a safety barrier around the person enabling them to be electronically moved on a railing up and down the stairs.

“This applies not only to wheelchair users but also to people on crutches who may have difficulty going up the stairs,” he said.

Meyer said they had collaborated with APD which had resulted in the purchase and installation of Evacuation Chairs (EVAC) at all the lifts and staircases.

“Moving forward we will endeavour to incorporate the physically disabled requirements and needs into all future infrastructure and facility projects,” he said.

CAPTION: Bulelwa Bloko, of Airports Company South Africa, demonstrates the use of one of the wheelchair stair-lifts which have been installed at the company’s office block in Port Elizabeth for people with mobility difficulties. Photo: Full Stop Communications