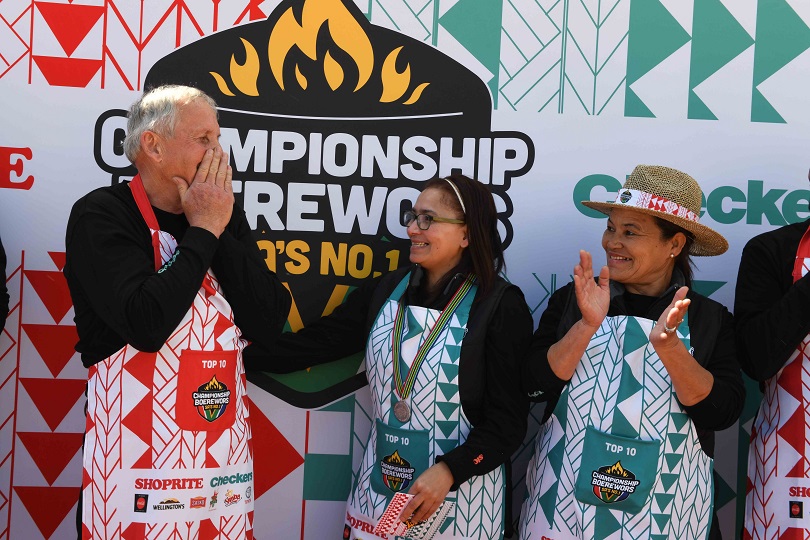 Olivier Kritzinger (66) from Joubertina in the Eastern Cape reclaimed the sought after Championship Boerewors title, this time with a totally different recipe that saw him winning in 2016.

Overwhelmed and grateful is how he described his emotions after he was announced the winner earlier today (28 August 2019) at an exclusive beach braai-off where the top 10 finalists faced off to impress an independent judging panel of culinary experts from the South African Chefs Association (SACA). Among the judges were celebrity chefs Zola Nene and Pete Goffe-Wood.

“I have a passion for quality,” says the winner who has entered the competition 17 times. “Good quality meat and spices plus the correct method are the secrets to my winning recipe,” he adds.

Runner-up was last year’s winner, Yvonne Blaauw from Wellington, with Jimmy Steenberg, from Despatch in the Eastern Cape, in third place.

Along with the title of SA’s No.1 Boerewors Champion, Kritzinger also walks away with prizes worth more than R500 000, including a brand-new Toyota Fortuner 2.4 GD-6 4X4 6AT.

Kritzinger’s recipe will be on sale in all Shoprite and Checkers stores nationwide from Friday, 13 September 2019 – just in time for Heritage Day and the kick-off of the 2019 Rugby World Cup.

Shoprite and Checkers are proud of the country’s boerewors tradition and celebrate it by hosting the annual Championship Boerewors competition. For the past 27 years, these two supermarket chains have embarked on a nationwide search for South Africa’s very best boerewors – creating a legacy of quality, taste and trust.

Olivier Kritzinger Winner reacts during the announcement of the 2019 Championship Boerewors Competition held at The Grand, V and A Waterfront, CAPE TOWN, South Africa