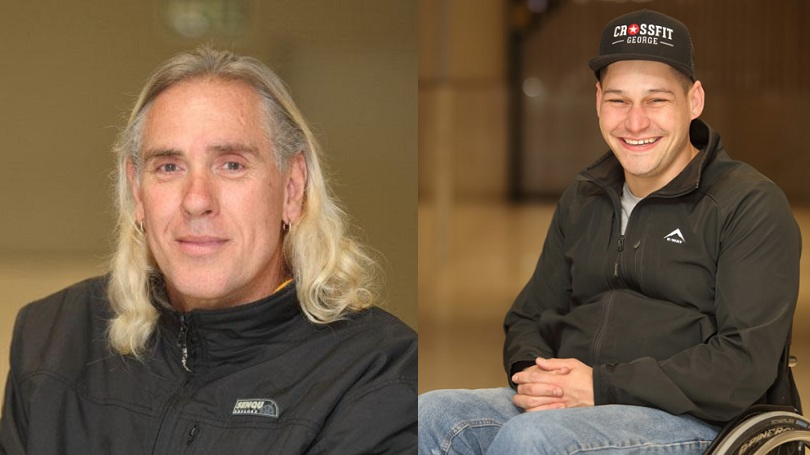 Thirty years ago, three days before his seventeenth birthday, Andre Koen was involved in a motorcycle accident.  He broke his neck at C6 & C7 and spent five months in hospital in Pretoria.

Andre (top left) had been a keen athlete, taking part in the various middle distance events as well as a number of half-marathons.  After the accident, he did not participate much in sport apart from the occasional outing in his wheelchair and gym session.

It was not until he relocated to Riversdale in 2015 that he first laid eyes on a hand cycle and his passion for the sport was born.

From 2015 to 2017, he competed in a chair donated by a charity organisation.  The late Fanie Joubert bought him a new chair in 2017, something he will always be grateful for.

Andre completed the Cape Town Cycle Tour the following year, albeit with assistance from his fellow cyclists after he broke a chain 8 km from the finish.

His latest accomplishment was a ninth-place finish at this year’s Cango 42 km Marathon.

Andre hopes to enter his fourth full marathon at the Outeniqua Cycle Challenge in September should his health permit it.

He is grateful to the support received from Baleia Wines which has enabled him to compete until now.  However, he is currently raising funds and also looking for a sponsor for better equipment so that he can take is performances to the next level.

Away from cycling, Andre started painting in 2018 and is determined to continue improving his skills.  With his positive attitude and ready smile, there is no doubt he will accomplish all these goals.

Shaun Butler (top right) broke his neck (T3-T5) on Easter Sunday 2014 on a ride with his motorcycle club, The Syndicate MC, while delivering Easter eggs to underprivileged children.

The accident came at a particularly difficult time in his life as his grandfather had recently been diagnosed with cancer.

Shaun was transferred to the Aurora Rehabilitation Centre in Port Elizabeth.  Nine weeks later, through sheer determination, he had set a record for the fastest recovery from the highest grade injury dealt with by the centre.

“I kept myself active and had started going to the gym shortly before the accident.  This is what motivated me and I believe it was my saving grace,” said Shaun.

He took part in his first OCC 5 km fun event in 2015, using a day-to-day wheelchair but immediately saw the potential of racing as a sport.

After acquiring a racing cycle in July 2016, he began to progress quickly completing his first 50 km two months later and was hooked.

In 2017 he competed in the OCC 42 km marathon for the first time in his third appearance, but missed last year’s event.

Shaun was extremely disappointed to learn that the OCC had been cancelled earlier in the year as it is one of the only events in which he can compete with his peers.

But now that the event is back on track, he is looking forward to competing again although he is still not sure if he’ll be ready for the full marathon and may compete in the half-marathon.

Shaun is grateful to the organisers who rescued the event and also to his support team, Knysna Toyota and George Switchboards where he currently responsible for marketing; and wished all the competitors good luck.

Apart from the George Municipality & George Business Chamber, Lancewood and the Department of Cultural Affairs & Sport is supporting the event.  Halfway Toyota is the venue host for the event.