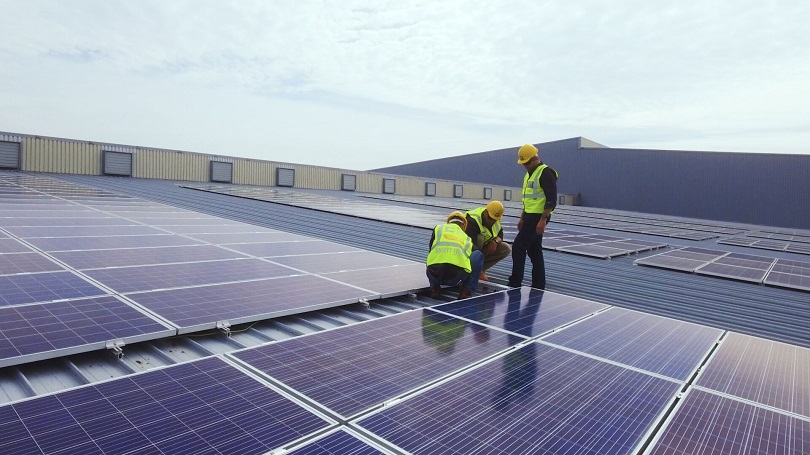 Energy Partners Solar – a division of Energy Partners and part of the PSG group of companies – completed Phase 1 of this project, which would eventually amount to 2.4MW of solar generation capacity. Aside from its scale, the 2.4MWp photovoltaic (PV) system at Pick n Pay’s Longmeadow Distribution Centre still sets multiple benchmarks in the rapidly growing corporate and industrial (C&I) solar industry in Africa.

This is according to Manie de Waal, CEO of Energy Partners Solar, who says that corporate PPAs with private service providers have become a crucial consideration for long-term profitability of businesses in South Africa, as well as a way to reduce business risks in the shadow of irregular power supply and uncertainty around the future of state-owned central grids.

He adds that two years ago, corporate SA had a cautious approach to exploring alternate sources of power.  “Today there is no time for caution – it’s time to take the power back for the sake of our economy.”

Some key facts about the system gives an idea of the scale and potential of this bold joint initiative, which was achieved without the need for capital investment from Pick n Pay. Energy Partners Solar designed, built and operates the PV system at Longmeadow in its entirety.

“Considering recent announcements by the Department of Energy (regarding the application for Generation Licenses for 1 – 10MW embedded generation systems), there seems to be more political will to once again encourage bold initiatives such as this.”

In light of this De Waal says that multiple companies that were restricted in their system size over the last two years, have showed interest in starting the submission process to Nersa to enlarge their systems and unlock their full solar potential for on-site generation and consumption.

Reviewing the Longmeadow transaction Henri van Eetveldt, Senior Solar and Storage Consultant at Energy Partners, points to some important considerations before entering into PPA agreements of any nature.

To start, Van Eetveldt says that every PPA should be based on a predetermined performance agreement. “Not only should the agreement explicitly state how much the service provider’s rate for electricity will be, but also provide a guarantee that these rates will always be meaningfully less than the tariff of the grid alternative.”

The installation at the Longmeadow distribution centre was commissioned as part of Pick n Pay’s fifteen-year campaign to half their electricity consumption by 2025. This PV system is designed to reduce the retailer’s total grid usage by an impressive 6%, and the savings guarantee ensures that the service provider reaches this production target.

According to Van Eetveldt, the track record of the service provider should also be an important deciding factor when entering into a PPA. “PPAs are typically long-term agreements and it is important to partner with service providers who will be there in the long run in this fast-changing industry. This means choosing a partner that has adequate financial backing, and has already built up a reputation as a reliable service provider.”

Another aspect where a strong track record is advantageous, is in the drafting of contracts with new clients. “Contracts need to be updated regularly to ensure that they are watertight for all parties involved, and you need a service provider who has enough industry experience to understand that a one-size-fits-all approach does not apply to PPA contracts. Each business has unique requirements, which also need to be worked into a contract.”

On the Longmeadow project, for example, Energy Partners Solar had to ensure that transparent buy-out values were written into the contract. This affords Pick n Pay the opportunity to exit the PPA at any time, if the need ever arises.

Any investment into solar power is a long term (25 years and more) commitment. Solar power generation in the South African C&I market has grown rapidly over the last five years and currently exceeds over 700 MW of embedded generation capacity.

“As many of these system owners have come to realise, the efficient operation of these assets is crucial, and best left to specialised O&M teams,” says Dewaal van Heerden, Head of O&M at Energy Partners Solar, who will soon be monitoring and maintaining more than 50MW of rooftop and ground-mount solar systems across Africa.

“If the performance of a PV system decreases by as little as 12%, over and above the expected panel degradation, the losses to cost-savings will exceed the price of the entire system over its lifetime. Dirt and pollution can hypothetically reduce system performance by up to 40%, while micro cracks, potential-induced degradation losses and physical damage can cut performance by a further 32%,”

The most important driver of savings on a PV system (apart from the avoided grid cost) is the actual solar yield that one can achieve. The O&M team’s task is to ensure that this number is always as close as possible to the yield for which the system was modelled.

When judging solar yield a number of aspects should be considered:

Van Heerden notes that since commissioning, the Longmeadow system has achieved the exact modelled yield (actual weather patterns delivered 1.3% below modelled), while actually losing 0.9% to factors outside of control (such as load shedding).

He adds that there has only been a small impact on demand (kVA) charges at Longmeadow – as the site runs 24 hours a day, 365 days a year with a resultant ‘flat’ consumption profile. However, this was no surprise for the client, as the Energy Partners Engineering team provided for this in their saving estimates.

Van Heerden says that potential investors in solar power are encouraged to pay detailed attention to any solar savings estimations provided by the service provider, as these can easily be overstated.

Van Eetveldt stresses that the PPA provider must ensure that the integrity of the client’s roof will not be compromised. “The roof is often the most expensive part of the building, which is why service providers need to ensure that there is absolutely no risk that it will suffer any damage as a result of the PV system’s installation.”

A professional roof report by a structural engineer is crucial when designing the panel layout, he notes. “At the Longmeadow site, the abundant roof space allowed the installation team to distribute the weight of the system more efficiently. We were able to mount solar modules directly over the support beams of the roof, ensuring that the structure is subjected to the least amount of stress possible.”

He adds that the integrity of the roof also needs to be considered when planning the ongoing maintenance of the system. “Walkways need to be planned and installed so that technicians can access panels without causing any damage to the roof throughout the life cycle of the system. An experienced service provider will also ensure that other risks, such as corrosion from concentrated drips, are mitigated.”

Lastly, Van Eetveldt says that a PPA works at its best when it is integrated with other solutions that can further save on energy costs. “As an example, at the Longmeadow site, we also identified an opportunity to pair the PV system with an outsourced lighting solution, which yielded additional savings. Similarly, solar panels and state-of-the-art outsourced refrigeration are among the best matches to save on operating costs. Integration with generators and batteries have also started to form part of some of our PPA agreements.”

He points out that integrating PPAs and different cost-cutting saving services is a skill on its own. It is therefore crucial to have a service provider with the experience and capabilities to ensure that the combined solutions are effective.

“In a few short years, we predict that PPAs will become the norm for businesses in South Africa – and not only solar PPAs. We see more and more clients turning towards full outsourcing of their utilities, which is a huge departure from the traditional ‘all under one roof’ approach. This speaks directly to the Energy Partners vision – to provide the cheapest, most reliable and most sustainable power, water, cooling and steam in Africa,” De Waal concludes.

Founded in 2008, Energy Partners is a leading energy solutions provider in South Africa that provides clients with innovative solutions (including fully outsourced supply contracts – e.g. power, water, steam and cooling) to suit their needs. Energy Partners has built a high quality team of talented individuals and robust processes which offer end-to-end solutions and integrate the different components of energy optimisation to deliver optimum results – including capital solutions that put clients in a positive cash flow positions from day one. Industries in which Energy Partners specialise include: food retail, retail, healthcare, hospitality, food processing and logistics. For more information visit www.energypartners.co.za

PSG Group is an investment holding company consisting of underlying investments that operate across industries which include financial services, banking, private equity, agriculture and education. PSG Group has a market capitalisation in excess of R40bn, with our largest investment being a 30,7% interest in Capitec.