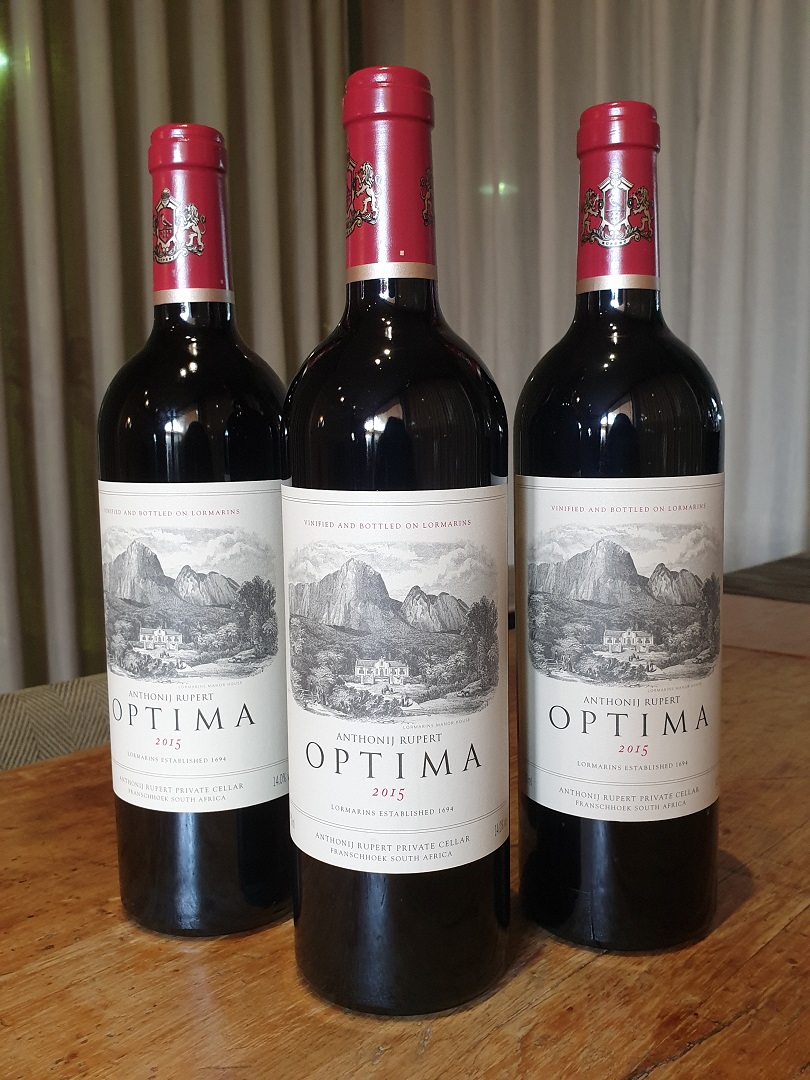 The 2015 vintage is internationally regarded as one of South Africa’s finest to date, and if there’s one wine that illustrates that, it’s Anthonij Rupert’s Optima 2015.

This vintage of this limited Bordeaux blend (40% Cabernet Franc, 35% Merlot and 25% Cabernet Sauvignon) continues a legacy that has seen previous vintages consistently scoring 90 points and more with international experts.

Commenting on the harvest, Siobhan Thompson, CEO of Wines of South Africa (WOSA), said: “The wines from our 2015 harvest are set to cement South Africa’s position as the most exciting wine producer in the world. The wave of optimism around the quality of South African wines will only continue.”

The grapes for the Anthonij Rupert Optima 2015 come from Franschhoek and Darling. The grapes were hand-picked in the early morning and then hand-sorted in the cellar. After cold-soaking, fermentation started and lasted for about 20 days. Malolactic fermentation took place in new 225 litre French oak barrels and 10 000 litre oak tanks. The components were made and aged separately for 18 months in 225 litre French oak barrels (35% new oak) after which the wines were blended and aged for a further 6 months in barrel and tank, and bottle-matured for a further 24 months before release.

The 2015 Anthonij Rupert Optima offers a delightful interplay of blackcurrant, cassis, violet perfume and an earthy richness. The wine feels silky, supple and smooth when first it hits the palate. Flavours of dark berry fruit, Christmas pudding, cigar box and spice then make their presence felt. It is beautifully poised and balanced with neither fruit nor oak dominating, displays a good backbone and lithe body. The oak is sympathetic and supportive. This is a delightful blend with a seemingly endless aftertaste, making it ideal for food. Pairs beautifully with a classic steak served with a freshly prepared Green Peppercorn sauce. Or for the colder nights a slow cooked lamb tagine. At the end of a meal matured hard cheeses such as aged Gouda, Mature Cheddar, Tallegio or Manchego pair perfectly with this Bordeaux blend. The 2015 Anthonij Rupert Optima is available directly from the estate or select specialist stores nationwide at R200 per bottle.

The 2015 vintage of this Bordeaux blend comes with an impressive track record. The 2009 Anthonij Rupert Optima was awarded 90 points in the authoritative The Wine Spectator, regarded as one of the wine industry’s most influential international publications, while the renowned American wine critic, James Suckling, included no fewer than 9 wines from the Anthonij Rupert portfolio in his latest South African report, with the Anthonij Rupert Optima 2013 scoring an outstanding 92 points.