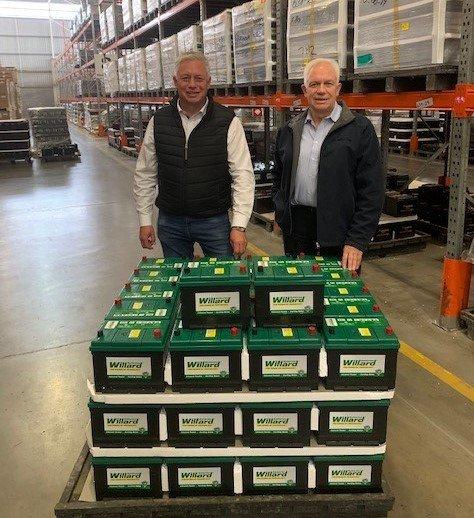 Brian Joss – Batteries are an integral part of most motor vehicles, whether they use an internal combustion engine, electric motor, or hybrid power train.

This means there are a large number of countries making batteries all over the world and as such they are always significant exhibitors at the various Automechanika trade fairs for the automotive aftermarket staged globally.

This is for the latest edition of Automechanika Johannesburg, which takes place at the Johannesburg Expo Centre, NASREC, from 18-21 September, many battery makers and distributors will be displaying their wares and highlighting new technologies.

Automotive battery technology has made huge strides in recent years, after being anchored for a long time in a world of lead-acid products that needed topping up with distilled water.

The technology of lead-acid batteries has evolved over the past few years from the original vented battery which required regular maintenance to the maintenance free technology better known as SMF or Sealed Maintenance Free Batteries to batteries designed for modern start-stop applications.

First came maintenance-free batteries, then those required for use with stop-start engine management systems. This technology is referred to in the market as Start Stop EFB in the flooded version or AGM in the “valve-regulated” version.

They range from the very well-established, but comparatively heavy lead-acid batteries to others still in its research stage as Li-air, Al-air, or Fe-air batteries, although Li-ion batteries represent currently the most used battery type in commercial BEV. However, it should be noted that lead acid batteries are still used in most electric vehicles to power the low voltage systems like the controls and general vehicle electronics. There will thus be major advances in the battery business over the next decade.

One of these leading battery manufacturers is AutoX, which has a history dating back to 1954 when started manufacturing Willard batteries locally, in Port Elizabeth, after being the distributor of this American brand since 1920. Over the years the company has grown with the acquisition of SABAT Batteries. AutoX is also the distributor of VARTA Batteries in South Africa through their association with Clarios (previously known as JCI. Clarios is the world’s largest automotive battery manufacturer with 156 million batteries per annum which is approximately a third of the world market.

AutoX has also aligned with Yuasa as a distributor for their premium motorcycle battery range to enhance their offering in another segment of the market.

Power Technologies acquired the shareholding of Willard, a subsidiary of Altron Limited, in 1981. Then, in 2017, Trinitas, a Private Equity company bought AutoX from Altron Limited. With a state-of-the-art manufacturing facility and a capacity of manufacturing two million batteries per annum AutoX is geared for future growth in the local replacement, OEM, and export markets.

AutoX is a long-time exhibitor at Automechanika Johannesburg, using its involvement tactically to launch new products and to promote new technologies and services.  This year AutoX will be displaying its offerings under the Willard, SABAT, Varta and Yuasa brands.

The company has been as strong supporter of motor sport over the years, mainly through its SABAT brand and there will be a racing simulator on their stand this year for visitors to test their driving skills.

“Innovation is critical to be a leader in a technological world such as automotive batteries and we are proud of our various innovation initiatives and achievements,” explained Corné Strydom, the AutoX Sales and Marketing Executive. “AutoX through its Willard brand is also known for its innovative limited-edition range of batteries. This year the company introduced the Willard Blue Limited-Edition Battery in an effort to create more awareness of the impact of pollution in our oceans.”

Meanwhile Metair, another major player in the South African battery manufacturing environment has announced it is to commission its first lithium-ion (li-ion) battery production line in Romania.  The development work for the R80-million investment was done at Prime Batteries (a Metair partner company), but with a Metair subsidiary, Rombat, responsible for the production line at its new facility in Bucharest, according to a recent report in Engineering News.

There are a host of other battery manufacturers and distributors that will be represented at Automechanika Johannesburg, including Deltec, Probe, Schumacher, Monbat, Dixon, Gaydon and three Indian brands – Livguard, Amaron, and Jamna.