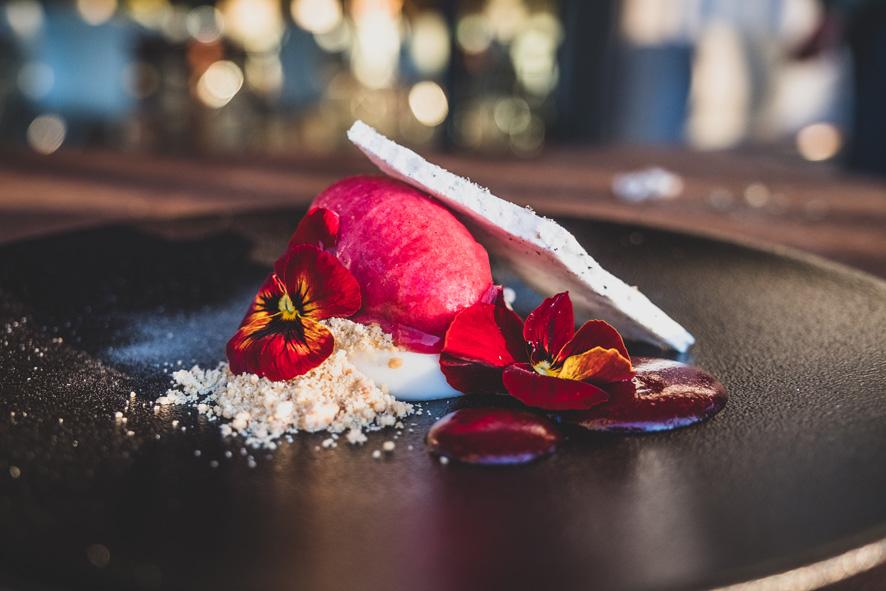 TOKARA Restaurant Executive Chef, Carolize Coetzee, has turned her appetite for relaxed, playful dining up a notch with her new ingredient-driven spring menu, reinterpreting traditional South African cookery following a three-week stage at Cosme in New York, ranked 23rd in the world by the World’s 50 Best Restaurants this year.

The menu is interspersed with ingredients unique to the Simonsberg area of Stellenbosch, fresh produce growing in the Tokara Wine and Olive Estate’s organic vegetable garden and playful flavour combinations.

Fragrant Cape flavours such as nasturtium, kapokbos, renosterbos and sorrel are infused in classically prepared dishes alongside broad beans, asparagus and stone fruit, just some of the new season’s bounty.

Try the oyster and ‘viskop’ broth with Chinese cabbage, peach & caviar; or the spinach, renosterbos and cured egg yolk for starters. Let lightly smoked duck breast, parsnip, whisky and hazelnut shitake; or the beetroot, springbok with nutmeg & sorrel take a bow for mains. For a dessert with a twist, the Spanish almond cake with hibiscus and lemon posset, hibiscus meringue, almond streusel and Spanish nougat ice-cream is utter indulgence.

Chef Carolize who worked alongside Chef Daniela Soto-Innes, the 2019 World’s Best Female Chef, at Cosme was inspired by how Daniela manages to present traditional Mexican produce, heirloom recipes and ancient techniques in a refined and modern context.

“We often tend to shy away from finding inspiration in revisiting our own culinary history and rather try to emulate what’s going on elsewhere in the world. As Daniela and her mentor Enrique Olvera remained steadfast in their pursuit of the essence of Mexican cookery, I’d like to remind our guests with each new menu of something they may have forgotten about our collective culinary memory.

“My aim is for my food to have a real sense of place and that our guests should leave with an indelible impression of our restaurant at the foot of the Simonsberg Mountain. That impression should not only concern the food, wine, views and architecture, but the joy and enthusiasm of all the people cooking, serving and cleaning behind the scenes,” says Chef Carolize.

She was particularly inspired by the family-style kitchen culture at Cosme.

“Chef Daniela has a real connection with her staff from diverse backgrounds and a multitude of different countries. The Cosme culture has changed the way in which I see the industry. You can create your own ‘vibe’ and culture within a kitchen with joy and respect right at the core,” she explains.

Cooking from a young age with their mothers, sisters and grandmothers, and a love for cooking family recipes passed down from one generation to another, is something both chefs have in common.

Family recipes, heirloom ingredients and memories conjured up by food, are the heart of Chef Carolize’s cooking. Through the lens of food memory, she takes diners on a memorable journey.

Tokara Restaurant is a landmark culinary destination in the Stellenbosch Winelands framed by spectacular views and contemporary art. It enjoys pride of place on the crest of the Helshoogte Pass on the magnificent Tokara Wine and Olive Estate.

In June TOKARA head chef Carolize Coetzee went to the Big Apple to take a bite of New York life as well as to do a stage at Cosme, ranked as the 23d best restaurant in the world, by World’s 50 Best Restaurants. She shares her experience working alongside Chef Daniela Soto-Innes, named the World’s Best Female Chef for 2019.

You recently did a stage at Cosme in New York, how did this transpire?

Wilhelm (owner of Tokara Restaurant) asked me if I would be interested in doing a stage, and if I wanted to, where? He told me about Cosme, and I started doing research on Chef Daniela, Cosme, Atla and Pujol. I really related to Daniela’s story. How she cooked with her mother and grandmother, how she started working in kitchen at such a young age… We first sent letters to Daniela at Cosme requesting a stage, including a letter of support in Spanish by Tokara Deli’s Mexican assistant manager Susy. We subsequently asked Wilhelm’s business partner, Johan, who now lives in New York, to discuss the possibility with Cosme’s kitchen manager in person. We heard back from them in January, and then all the planning started.  Buying the airline tickets to New York was the easy part, but trying to find accommodation on Manhattan Island in the middle of their summer was almost impossible! I ended up staying across the East River in Long Island City and commuted via subway to Cosme each day.

I was extremely nervous meeting her on my first day there, but she was so friendly and welcoming. You can just see how passionate she is about food, people and her culture. Every morning it probably takes her up to 30 minutes to greet everyone in the kitchen, because she takes the time to speak to every single person in the kitchen. I could see that she has a real connection with her staff.  The kitchen cultures at Cosme as well as the Mexican culture are the main things that made an impression on me. It changed the way in which I see the industry. You can create your own “vibe” and culture within your kitchen. All these stigmas about the hospitality industry and kitchen life does not have to be your story. And joy and respect is right at the core of this.

What was your favourite dish at Cosme?

My favourite dish was the ‘honeynut squash tamal’, served with ‘ha’sikil p’ak, toasted pumpkin seeds and castelrosso’. It reminded me of our traditional “mielie pap”, which has been a favourite of mine since I was a child. They mix masa with honey and squash purée. This is steamed in banana leaf. The texture is soft and the flavour is a perfect mix of sweet and savoury. There is nothing like the masa they make there with the Mexican corn. The ha’sikil p’ak is a sauce made from tomatillos, tomatoes, guajillo chillies, onions, garlic, Thai chilli, pumpkin seeds and browned butter. The cheese, which they grate on top, is savoury and soft.

Did you do any South African cooking for them?

I made the team bobotie for the family meal on my last day. Everyone really liked it.

From a vineyard kitchen in Stellenbosch to a kitchen in one of the world’s biggest cities – what was that like?

What did you appreciate most about the culture of the Cosme kitchen?

Everyone in that kitchen is there with a purpose. They really want to be there and they really want to grow and become better. They always have so much fun but never lose focus. The food is the most important always. They have incredible work ethic!

Most unusual thing you tried?

Your biggest challenge – and how did you overcome it?

It was definitely the language barrier. Almost everyone speaks Spanish, so English comes with not only a New York accent, but a Spanish one too. Some of the kitchen staff cannot speak English. So I just tried to pick up the Spanish docket/food calls in service, and I wrote everything down that I did not understand. They were very helpful and took the time to make sure I understood.

Other than Cosme, what was your top New York food moment?

With your new menu at Tokara – what influences will we see from your time in New York?

There will definitely be some influences in the food, technique-wise and some sauces that I can incorporate into my style of cooking. But mostly I am working on developing our kitchen culture.