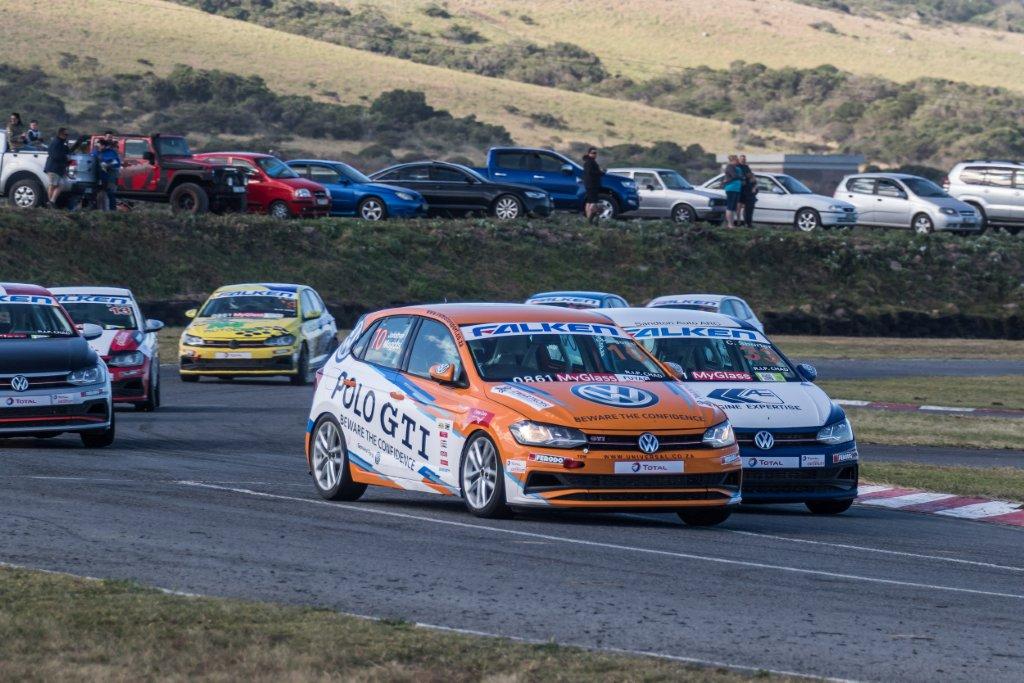 Brian Joss – Round six of the Extreme Festival at the East London Grand Prix circuit certainly delivered plenty of action for the enthusiastic local spectators – particularly as far as the highly competitive Falken Polo Cup was concerned.

While reigning champion Jeffrey Kruger and current points leader Bradley Liebenberg were the star performers, a first-race crash ended in drama for a handful of drivers.

Kruger and Liebenberg have emerged as the runaway leaders in the 2019 Falken Polo Cup championship during the first half of the season, and their dominance continued in East London. The race-winning return of former champion Devin Robertson at the previous event at Zwartkops added an exciting new dimension to the series, but it proved a once-off outing and he didn’t join the fray for round six.

With expectations of a thrilling first race, it ended prematurely on the opening lap, as Campos’ alternator seized which caused the engine to suddenly lose power heading into the infamous, flat-out Potters Pass. As a result, he was hit from behind by his brother Jason, with the ensuing mayhem resulting in Clinton Bezuidenhout and Alton Bouw also crashing out. Neveling was also caught up in the incident, but with minor damage to his car, he was able to return to the pits for repairs and restarted the race from the pit lane.

When the second part of the race got underway, Liebenberg led off the line but overshot the tight Cocobana corner, and dropped back to 15th position.

He eventually fought his way through the pack to finish sixth. Kruger had no such problems and passed Swart to take the win. Matt Shorter took the final step on the podium ahead of brother Chris, followed by Dario Busi, Liebenberg and Volkswagen Motorsport driver Jonathan Mogotsi.

Jano van der Westhuizen was the weekend’s first victim of the exceptionally fast Potters Pass, having crashed heavily during Friday practice. His team worked late into the night to rebuild the car, and he commendably finished in 13th place. The same theme continued after the race one melee, as the pit crews performed near-miracles to get most of the damaged cars back in action – with only Jason Campos not making the second heat.

Kruger’s determination to claw back essential points on championship leader Liebenberg was evident once again in race two. He managed to hold off the spirited challenge from Liebenberg to score an emphatic double victory, crossing the line with a lead of less than half a second.

“I’m ecstatic with the results and thanks to the team,” Kruger said. “It’s been a long time since our last victory, so we are very happy with our performance this weekend. It ensures that we keep the championship fight alive going into the next race in Cape Town.”

Liebenberg said: “Qualifying was great as I put the car on pole, but I made a mistake in race one while in the lead, which cost me valuable points. I drew 6th place starting position for race two, and although I managed to catch Jeffrey, I just couldn’t get past him and had to settle for second.

It’s a bit disappointing for me, but we are going to Cape Town next, and after taking pole and winning a race there earlier this year, I’m hoping to do well and take the pressure off going into the last round of the season.”

Matt Shorter ended third, with Keegan Campos and Clinton Bezuidenhout recovering from the race one drama to score fourth and sixth places respectively, with Swart separating the two.

Neveling wrapped up his weekend in seventh place, ahead of Mogotsi in eighth.

“The Falken Polo Cup once again showed how competitive the field is in identical cars,” commented Mike Rowe, head of Volkswagen Motorsport. “The first race crash was very unfortunate, but we are glad to report that none of the drivers were hurt, which proves the strength of the Polo GTi race cars. I must also commend the teams involved in the crash for getting four of the five cars back on the track for race two, which revealed their true grit and determination.

“Well done to Jeffrey for the two race wins, which makes the championship fight with Bradley more exciting, and sets the scene for some great racing at Killarney next month,” Rowe concluded.