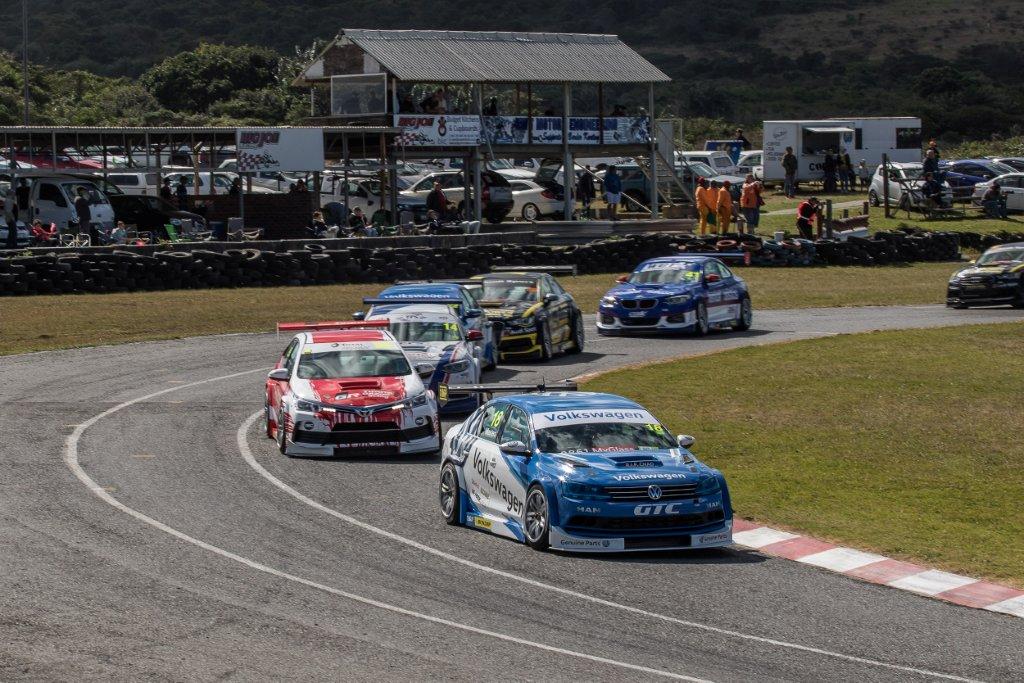 The East London circuit is renowned as the fastest outing on the South African motorsport calendar, and one of the most challenging, but for young Masters it was an opportunity he relished in his first outing at the scenic coastal circuit in the top-flight GTC Jetta.

Using his experience as a two-time GTC2 champion, Masters topped the timesheets in Saturday’s qualifying session with an impressive best lap of 1 min 23.447 sec, taking pole position ahead of Michael van Rooyen (Toyota) and Johan Fourie (BMW). Rowe was also on a charge, posting the fourth quickest time with a mere 0.285 sec separating him from Masters and less than two-hundredths of a second off Fourie.

With a superb turn-out from local race fans despite the blustery conditions, Masters confidently held station in the rolling start for the eight-lap first race. Despite coming under repeated attack from Van Rooyen, the talented Volkswagen Motorsport driver displayed calm maturity and notched up a well-deserved and extremely popular flag-to-flag victory.

Although he had a largely uneventful first race, Rowe brought his GTC Jetta home in fourth place just behind Fourie to secure crucial championship points.

Race two’s inverted grid set the scene for the most exciting action of the day. In the opening stint, a five-car high-speed train at the front of the field saw Rowe challenge Tschops Sipuka for the lead, only to be pushed wide under braking by the Audi driver in the final turn. Over the ensuing laps, an almighty battle had the spectators on their feet as Rowe, Fourie and Masters were bumper-to-bumper through the fast Potters Pass and Rifle Range sweeps, as well as plenty of jostling for positions in the tight corners.

It was a nail-biting affair, with Rowe holding off the challenge to cross the line third and claim the final step on the podium, with Sipuka taking the win and Van Rooyen second.

Having made his way through the field, Masters had soon closed up on Fourie and made a bold but clean move on the BMW driver going into the final turn on the second-last lap. He made the pass stick and closely shadowed his team-mate for the remaining lap to earn fourth place. It was a superb weekend for Masters that promoted him into the lead of the GTC championship – an enviable position with just two races remaining.

“It was an awesome weekend as I scored my first win in GTC, and bagged good points in race two,” an elated Masters said. “It’s fantastic to now be leading the championship, and I’m really looking forward to the next race in Cape Town.”

Consistency was the name of the game for Rowe: “I had a good weekend, going quickest in Friday’s first practice and running second for the rest of the day. I made a small mistake in qualifying on Saturday morning, but felt that I could have been in the front row with Keagan. The first race was quite spread out and I banked another fourth, but I’m staying consistent and getting good points in every race.

“We made some changes for race two and I was all over Tschops at the start and actually got past him going into the last corner, but he braked so late that he ran wide and pushed me out. The rest of the race was a real tussle with all five of us up front going flat-out, but I’m happy to finish on the podium and make up points on Simon Moss. The championship is still very close, and any of us in the top five could win the title this year.”

Head of Volkswagen Motorsport, Mike Rowe stated: “We had a really great weekend, as right from Friday morning we were setting the pace. Keagan was still finding his feet in practice but pulled something out the bag during qualifying to grab pole. It’s great that he won his first GTC race and moved into the lead of the championship, and I’m really happy for him.

“The team’s superb results have further strengthened our lead in the manufacturer’s points table, and we head to Cape Town really buoyed, as it’s all to play for in the remaining two races,” he added.

In the GTC2 series, it was an all-Golf GTi affair once again – but with the official Volkswagen Motorsport entries of Bradley Liebenberg and Adrian Wood still carrying additional weight and forced to use an intake restrictor in an effort by the organisers to level the playing field.

The trio maintained their positions throughout the first heat. However, the second race saw Wood develop a healthy lead in the opening stint, with Liebenberg and Smalberger hunting him down as the race progressed.

Unfortunately Wood lost time on the last lap as he picked up gearbox troubles, which allowed his team-mate to take over the lead.

Liebenberg and Smalberger battled it out in the closing lap, with the latter ultimately taking the flag. However, after the race Smalberger had a 20-second penalty added to his race time due to an engine overboost infringement. This handed championship-leader Liebenberg the victory, with Wood hanging on to score second.

“Coming into the weekend we knew that we still had to carry the balance of performance engine restrictor and extra 25 kg weight which hampered us a bit, but we managed our performance and scored good points for the championship,” Liebenberg said.

Wood added: “The team gave us an excellent car, and we showed really good pace the whole weekend. I got third in race one and was leading the second heat, but had a bit of heartbreak with gearbox issues and just managed to crawl across the line. Overall I’m happy with the pace we’ve shown and am looking forward to the next race.”

The next outing for the Global Touring Car championship is the penultimate race of the 2019 season at Killarney, on 27 and 28 September. “We were really strong in GTC and GTC2 in Cape Town earlier this year, so I’m looking forward to another good race there,” Mike Rowe concluded.