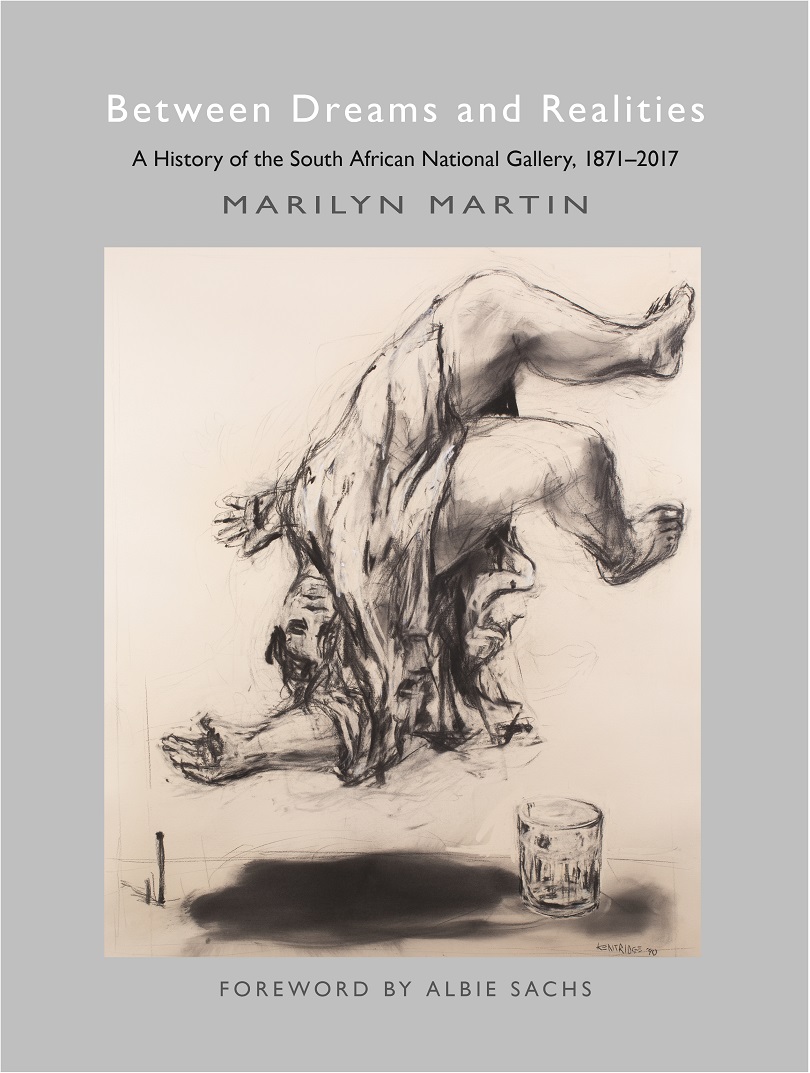 On the front cover of Between Dreams and Realities is a charcoal and gouache, entitled Levitation (1990 by pre-eminent artist William Kentridge, which is an apt illustration for this important book by Martin who was director of the South African National Gallery (SANG) for 11 years and in 2001 was appointed director of art  collections for Iziko Museums until her retirement in 2008. Levitation is the rising or lifting of a person or object , a trick often used by magicians.  Martin had to use prestidigitation to manage and rise above the political machinations of running a national art gallery, particularly in a country as complex and diverse as South Africa, where colonialism is often used as a dirty word. Running an art gallery is not just acquiring collections and deciding in which corner to hang a Pierneef or a Gerard Sekoto.

As Albie Sachs, retired Constitutional Court judge writes in the foreword, “I imagined that the tale of the evolution of the country’s national art collection would be couched in respectful, even reverential language with occasional polite hints of problems along the way… But I was wrong. Marilyn Martin, tells the story of an institution subject to almost non-stop turbulence, punctuated with occasional moments of serenity.”

The moments of serenity were few and far between as Martin recounts the story of SANG without sparing the horses. She wasn’t afraid of challenging the establishment, including Anton Rupert (Rembrandt Arts Foundation) questioning why the Afrikaner millionaire had been funding the prize for the best works at the Cape Town Triennial when the gallery, using all its resources, derived no benefit from it. Of course, the response at the time was predictable, with the Die Burger leading the way by attacking the “man” and not the ball.

As it happens Martin won that battle but there were more to come and people were waiting in the wings for her to slip up. In 1961 there was even an argument about the name whether it should be called a museum or a gallery. Eventually common sense won. The reality is that SANG started out as a British colonial project all those years ago but now finds itself in a vastly changed democratic South Africa where government indifference and budget cuts, among others, are contributing to the challenges that it faces.

The Rupert issue found Martin facing disciplinary charges and the process lasted four months during which Die Burger led the charge against her integrity.

There was another debate about Tretchikoff’s the Herb Seller , and according to art lecturer Andrew Lamprecht, the painting had acquired socio-political meaning, this 60 years after it was painted. Lamprecht implied the work had anti-apartheid nuances, which is surprising, Martin notes, as the work was owned by economic affairs minister Jan Haak in the 1960s and later by foreign affairs minister Pik Botha.

Another controversial figure was Riason Naidoo, the first black director in a museum (Iziko) where there had never been black curators. However, he was dismissed and despite comment from well-known artists and critics which were aired in the media, Martin gives an inside view of the debacle.

Critic and scholar Ashraf Jamal was the main speaker at the Friends of the National Gallery’s (FONG) 50th anniversary on April 15 2018, he made some pertinent remarks which struck a chord with Martin. Among the points Jamal made was that the SANG should guard against political correctness, asking what is the national gallery’s place and role?

Martin analyses these two questions in the final chapter. She asks that following the opening of the Zeitz MOCAA gallery at the V&A Waterfront have SANG, the Johannesburg Art Gallery, Durban Art Gallery  and the Pretoria Art Museum ceased to exist except in the minds of the few who still care? This after all the publicity surrounding the Zeitz which is in a building that is a work of art itself. Her analysis will shock you and the final words in the narrative will give you plenty to mull over. ”At Iziko (under whose umbrella SANG falls) history is being ignored and legacies are being dismantled.”  However, Martin is hopeful that SANG will, despite the indifference displayed by government, eventually achieve greatness again, at home and in the world.

The national gallery started with a bequest of 45 paintings and money from Thomas Butterworth Bayley for the establishment of a public art gallery in Cape Town in 1871, and though it ends in 2017, Martin has included issues that occurred while the manuscript was being edited and revised in 2018.

Between Dreams and Realities, which is liberally illustrated, is an important book, which highlights the achievements of the SANG and the people involved, despite the obstacles they faced brought by  challenges of the new, democratic South Africa, told by someone who was at the coal-face.

Despite the complex subject it is written in plain English. Between Dreams and Realities is also a celebration of our heritage and cultural wealth. There is a comprehensive A – Z index , notes, a list of illustrations and abbreviations and acronyms. In 2002 Martin was admitted to the Legion of Honour of the Republic of France at the rank of Officer and in 2013 she received the medal of the Foundation Alliance Française in Paris. Perhaps one day the South African government will accord her similar honours – she deserves it.