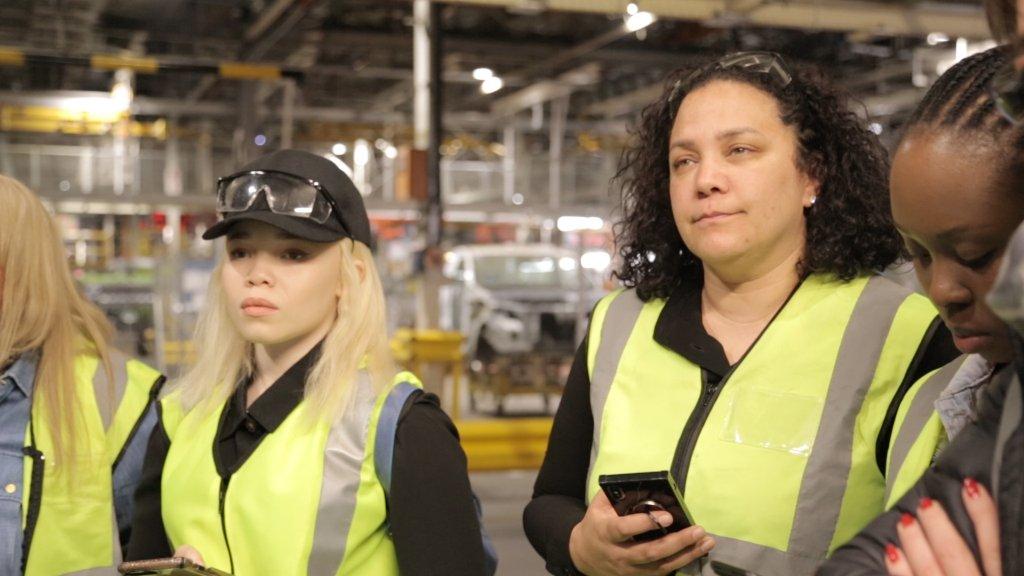 Brian Joss – Every August, Ford Motor Company of Southern Africa acknowledges and commemorates women who epitomise the ethos of what the automaker has dubbed #WomenWithDrive.

“The whole idea behind this campaign is to bring women together, to share our stories,” said Dudu Nxele, Manager of Corporate Communications. “To empower, motivate, uplift, and inspire. To show how, despite adversity and challenges in our professional or personal lives, we are more resilient than we often give ourselves credit for. And that, with the right support, we can still pursue a life of passion and purpose.”

“This year, we decided to start the festivities with a behind-the-scenes tour of our vehicle assembly plant in Silverton,” she continued. “We asked several of our female employees to share with invited guests a personal anecdote of what it meant for them to be #WomenWithDrive. Although it’s still a male-dominated industry, I think most of our guests were surprised by just how many of our employees are female, all doing exactly the same jobs as their male counterparts on the assembly line!”

Four special guests in particular were asked to share their personal stories, with the view to everyone taking the message of sisterhood and solidarity back into her respective community and sphere of influence.

Well-known human potential and parenting expert Nikki Bush lost her husband in November 2017, when he was shot and killed during a home invasion. They had just celebrated their 26th wedding anniversary.

“There was so much collateral damage from those six short minutes that changed my life,” she said. “But I am now in a space where I can say that the amount of collateral damage has been triumphed by the overwhelming collateral beauty and growth we have experienced in the aftermath of traumatic and sudden loss.”

It was a piece of advice she received from a psychologist friend, in her darkest hour at the end of her husband’s wake, which Nikki held onto, to help channel her pain into purpose, and take control of her narrative again.

“That moment in time felt like a full stop, the end of everything I knew,”

she said. “I had no sense of the future for the first time in my life, and it was terrifying. My friend helped me reframe the idea of the full stop as a comma and dot, dot, dot. The comma being a pause in my journey, not an end, and the dots representing the new future I was going to create for myself. In just a minute or two, she literally tasked me with taking responsibility for my healing and my life moving forward.”

It’s taken Nikki the better part of 20 months to fully understand what this all meant. But through consciously putting herself in new situations, with new people, in new places, and having different experiences, she has learned to see herself through a new lens, and is well on the journey to finding out ‘who Nikki is without Simon.’

“I am discovering who I am, standing alone, in my own light,” she said.

“This power to reframe, to reinvent, and rebirth ourselves is inherently feminine. It is both incredibly scary, and unbelievably exciting. In life, my husband enabled my first voice, as the parenting expert. We loved doing the parenting dance together, with our two boys, and there are so many of our stories contained in my teachings around parenting. In death, quite bizarrely and beautifully, Simon has enabled my second voice, around human potential. The woman you see here is not the widow. This is the woman who has extracted the lessons from the widow and is now teaching what she has learned.”

Through her work, Nikki is breaking the silence around death and loss, encouraging her audiences to choose curiosity over fear as they move forward. And instead of spending her time chasing down her husband’s killers, she has chosen to channel her energy into championing the provision of pre-school education for the majority of the population who do not have access.

“Lack of school readiness is at the heart of illiteracy, which feeds unemployment and leads to crime,” she said. Watch this space as Nikki pulls together unlikely parties in her Seriti Project initiative.

“Back in my twenties, I was the life of the party and on the way up in my career,” she said. “I worked with this super cute guy and started seeing him exclusively. One year into the relationship he hit me for the first time.

This escalated quickly into regular beatings. He constantly belittled me in private. I was embarrassed to talk about it. I was petrified to leave him. I felt helpless. We broke up. I moved house. I ran away. I lived with a friend. He always found me and wormed his way back into my life.”

“I stayed with him for another four long years,” she continued. “Then one day I woke up and decided it was time to live! I was done! I would do whatever it took to get away from him. I knew I would need to be stronger than ever before. And I know it’s easier said than done, but I did it. Then and there, I also promised to love myself more, and to forgive myself for the poor decisions I had made in the past.”

Then, at the age of 30, after finally getting out of that soul-destroying relationship during which time she had suffered three miscarriages, Melanie discovered she had womb cancer.

“There was a medical reason for all those miscarriages,” she said. “But I know now that it was also the Universe’s way of protecting me, from having kids with that abusive man.”

Following treatment, Melanie didn’t believe she would ever be able to bear children of her own. As it turned out, the Universe would gift her with two healthy pregnancies, and the births of a perfect boy and a perfect girl. She was also blessed with a third child from her husband’s previous marriage.

When Special Olympics South Africa approached Melanie to work with them, she didn’t realise just how important this organisation would become in her life. “When I unexpectedly fell pregnant with my daughter at the age of 40, I knew because of my age there was a higher risk of her having Down syndrome,” she said. “It was a big reality check for me. But I think we go through these kinds of experiences for a reason. Gaining a more personal insight to the realities of other people gives us an opportunity to develop a deeper sense of empathy for our fellow human beings, which is very humbling. I am now even more committed to and passionate about supporting this community of 55,000 incredible athletes and their amazing families.”

Michelle Mosalakae is an award-winning TV, film, and theatre actress, and a Rhodes Drama Honours Alumna. She is also Revlon’s first ambassador with albinism.

“Growing up I knew I was different, but I knew I was different in a good way,” she said. “I never felt like an outsider. My mom, who is also my manager, always told me that I was beautiful. And that seed of confidence my parents planted in me at such a young age, is the reason I am where I am today, doing what I was born to do.”

“I’ve gone through a lot of ups and downs in the industry,” she continued.

“I’ve learnt that the only thing that’s certain is uncertainty. Sometimes there’s work, sometimes there isn’t. I’ve also learnt to listen to and take advice from people I respect, because that doesn’t just inform my craft, but who I am, and who I want to be. Then there’s the complexity of my aesthetic.

But not having a ‘mainstream look’ at auditions has just forced me to work harder, to take initiative, and create my own opportunities, like writing and producing my own TV series, which is so exciting.”

By challenging stereotypes and breaking boundaries, Michelle has become a role model for a lot of young people. “As a public figure, you do have a responsibility,” she said. “It’s not always easy, even if most of that pressure comes from a positive place; people wanting to watch your career grow, and see you succeed. But knowing that you represent more than just yourself, and that through the platform you have been given you are able to inspire others, is very motivating.”

But as far as her career goes, it’s been anything but ordinary. After starting her own company at the age of 26, and working with more than 1,800 megastars in the entertainment industry, she did a 180 degree turn, throwing herself into Corporate Social Responsibility programmes and outreach initiatives in impoverished communities. And it’s this journey into philanthropy which has proven most life-changing.

“I started my career looking after the most iconic rock stars and pop stars on this planet, many of them obscenely wealthy and accustomed to a life of private jets, police motorcades, champagne baths, and dropping a million rand on a piece of jewellery,” she said of her previous life in showbiz. “I did a tour with one particular artist who demanded R75,000 of pink roses for the dressing room, and then he never even went into the dressing room. That was the turning point for me. I didn’t feel comfortable in that world anymore.”

By chance, she met the CEO and MD of Dis-Chem socially in Cape Town, and they asked her to help launch the Dis-Chem Foundation. It was here, harnessing her entrepreneurial skills and myriad relationships which she’d built with the media and powerful, well-connected people over the years, that Penny found her calling.

“Now I look after the nameless, the faceless, and the voiceless; society’s most vulnerable citizens,” she continued. “I don’t think there’s anything I haven’t seen, sadly. But I am driven by the fact that I can use the resources at my disposal to make a difference. For example, on the back of Carte Blanche’s exposé in August about the rape kit shortage at police stations nationwide, I got in touch with the Angel Network and we immediately mobilised an appeal for public donations to provide comfort packs to the victims of rape and sexual abuse when they go to report the crime at a police station. A small bag containing toiletries, a couple of snacks, and a personalised note goes a long way in helping to restore a sense of dignity and normalcy to a person who finds themselves in a completely abnormal and traumatic situation. We are unable to assist with the direct provision of rape kits for evidence collection due to medical protocol and people fighting over tenders.”

Even in the face of seemingly insurmountable obstacles, Penny keeps going.

She was the victim of a brutal hijacking, and it took her a long time, and a lot of introspection, to process. But she came back fighting. “You can choose to go the hell route, or the hope route,” she said. “I chose hope.”

Visit the Angel Network : www.theangelnetwork.co.za to see how you can help.