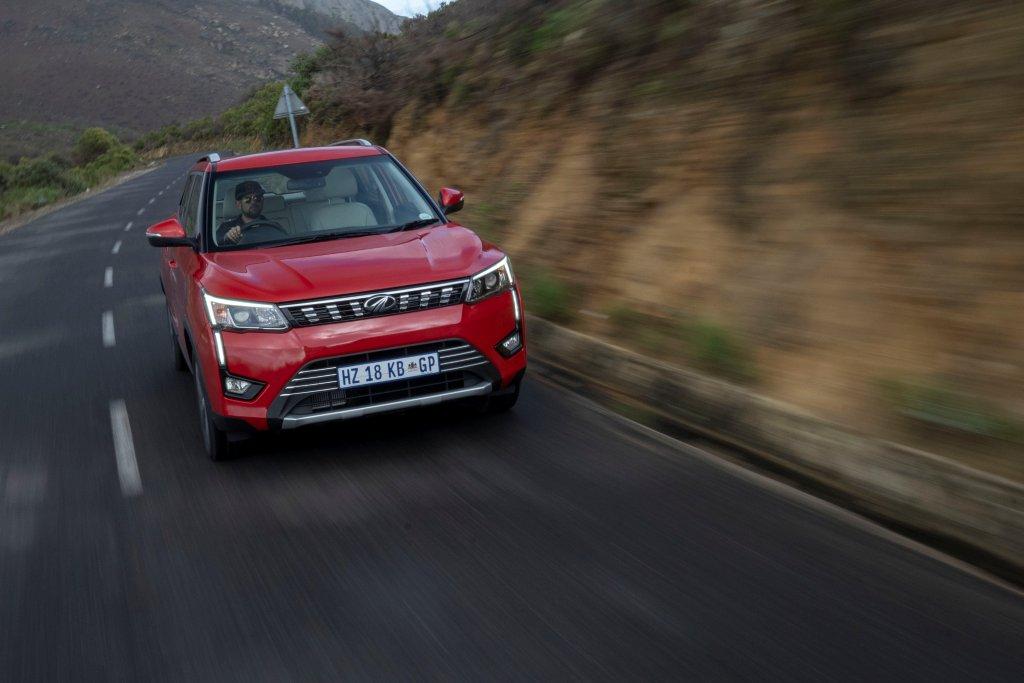 Brian Joss – Watch out Ford, Hyundai, and Renault, here comes Mahindra’s sport’s utility vehicle, the XUV3OO W8, a 1.5 turbo-diesel, to take you on in your own backyard.

I put the flagship of the range through its paces on a challenging round trip across the Mother City which included really, really heavy traffic on the way to Hout Bay by way of Muizenberg and back home over the scenic Chapman’s Peak. As the designated pilot I couldn’t enjoy the view much. But my passengers admired the passing show. Throughout, the  SUV performed brilliantly and the six-speed manual transmission was smooth and slick, even when we were crawling behind a heavy-duty construction blowing black diesel smoke into our faces. The real blight on the drive was the R50 toll fee, one way, at Chappies, and judging by the traffic, trucks, big, and small, sedans and motorbikes, SANRAL must be making a fortune.

Mahindra’s on the rise and rise as they have shown with their latest offering. But their engineers do some odd things.  In the KUV100 NXT (the Gremlin, May 27) the handbrake was really irritating. It was a pull and twist affair and took a lot of getting used to; the red speedometer needle in the XUV500 (the Gremlin, May 9) was almost invisible; and, starting the XUV 300 is also not that straightforward: first you press the stop-start button (the XUV3OO is keyless entry), then wait for it to do its system check, then, with your foot on the brake, press the button again to start the motor; the parking sensors stopped beeping when the system failed and a message came up on one of the binnacles: parking sensor failure, so it didn’t beep again. Finally, I had to disable the stop-start function, which is designed to save fuel, as it stopped more than it started, at the most inopportune times.  It seems to be a common fault with all the Mahindras that I have driven.  It’s possibly a glitch that the men or women at Mahindra can easily remedy.

Apart from that Mahindra’s newest SUV which was launched here in May is going to win favour in the segment where its other rivals are the Ford EcoSport, Renault Captur and the Hyundai Creta.

The XUV3OO (pronounced 3 double OO) OOH would probably be a better pronunciation: which you’d probably say when you hit the road for the first time.

The SUV with its unusual look grows on you.

New style elements include dual LED-strip daytime running lights (DRLs), aggressive grille, wide LED taillights and diamond cut alloy wheels. You won’t easily lose it in the mall car park. Mahindra says the XUV3OO is inspired “by the dynamism of the cheetah” which is evidenced by its squat stance. There is a floating colour coded roof, a roof-mounted spoiler and a high-mounted stop light. The XUV is much bigger than it seems with a body just short of four metres.  There are LED indicators in the heated,  folding side mirrors on the W8 which also has a sunroof. Interestingly you can manually fold the mirrors, a useful feature when you need to park in a narrow space. Don’t forget to unfold them or you’ll wonder why there is a blind spot.

Inside, everything has been designed around the drive who will enjoy holding the thick-rimmed steering wheel. And underneath the 17.78cm infotainment system is a button that allows you to operate the Smart Steering System which allows you to adapt to road conditions: Comfort mode in urban traffic with ease, a Normal and Sport, for of course, a sportier driving experience.

The infotainment system offers Apple CarPlay and Android Auto integration on the W8 and has in-built turn-by-turn navigation with regional maps as standard across the range. The system also allows the driver to pre-set many of the vehicle functions, including the background display and, on the W8, the colour of the LED backlit instrument panel. According to Mahindra the Bluesense app tracks your driving patterns which you can access from the app which can be connected to your phone or smart watch. You can also get information about past trips.  I added more than 360km to the XUV3OO and I recorded figures of just under 5 litres/100km which is a big plus when the people who regulate the price at the pump don’t know their Arthur from their Martha.

Other nice-to-haves in the W8 are turn-by-turn SatNav, a second USB charging point, an additional info screen between the LED-lit instrument cluster. Electric windows, cruise control, a voice command system, controls mounted on the steering wheel, a reverse parking camera, parking sensors, front and rear, which failed to beep, dual-climate control and light coloured leatherette upholstery which would be a bugger to keep pristine, especially with kids crawling all over the back seats, which have safety belts, and were hard to untangle, according to one passenger, who because she’s a bit short and stout had difficulty getting into the rear.

Safety features on the W8 include an emergency braking signaling system, seven airbags – side, curtain and a driver knee airbag as well as electronic stability (ESP) , ABS with EBF  distribution and  cornering braking control, warning lights on the front doors and seatbelt reminders and hill-hold assistance.

What’s it like to drive?  On start-up, if you remember to put your foot on the brake and press the button again, the engine sounds like it has a sore throat, gruff and rough But on the road the diesel settles down and the grumble soon disappears. The SUV provides a comfortable drive and you hardly feel any road imperfections.  It’s equally at home on the motorways, in the city streets and on the open road where it really shows its class.  Overtaking is easy, you don’t even have to change gears when you overtake and the 1.5 motor has a lot of grunt. And did I mention it’s a real fuel miser. Wind and cabin noise are almost non-existent. You can adjust the driver’s seat six ways and steering wheel is height-adjustable which means you can easily find a comfortable driving position and the view of the road is good, too. There is space aplenty with lots of leg and headroom for the passengers in the rear. The luggage compartment can be extended both vertically, with the option of three height settings for the luggage floor and horizontally by folding the rear seats forward in a 60:40 configuration. The 249 litre boot space is not that great, despite the 60:40 split. But then you can’t have everything. Storage spaces include a tray near the charge outlets for your phone and large door pockets.

If you want to get away from it all for a weekend or longer, the XUV300 is the one to get you there. The trip there will be just as pleasant as the destination and your wallet will thank you.

Mahindra has a real winner with the XUV300 and if you’re looking for new wheels put it near the top of the list.