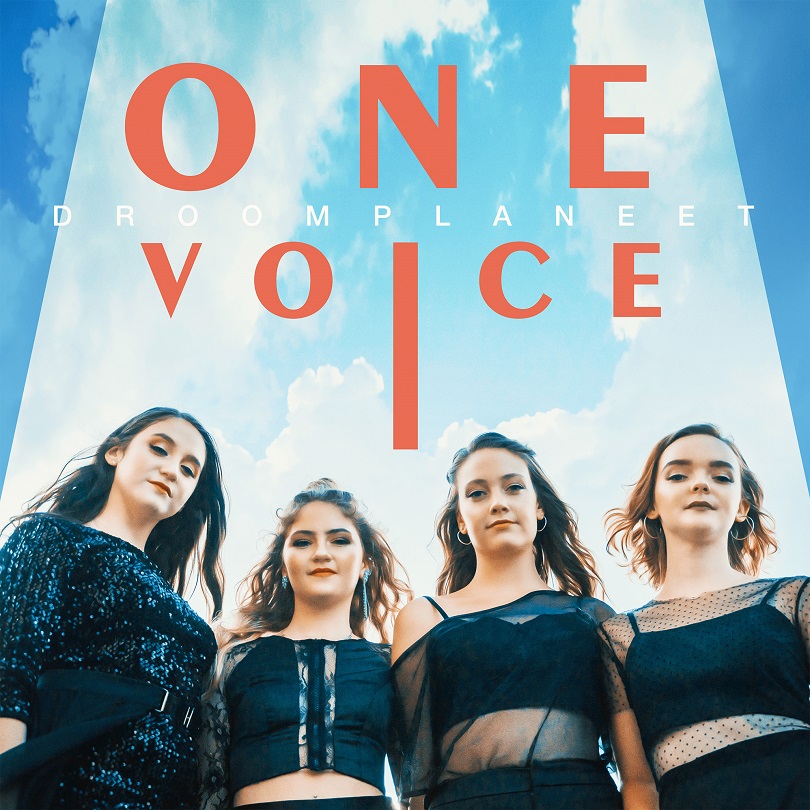 The group, which combines four unique vocals to create a modern harmonious pop sound, is like a breath of fresh air in the music industry. Their first single is now available on digital platforms and has already caused quite a stir on social media.

DROOMPLANEET is an upbeat pop song written by Lientjie Sothman. It is a feel-good track about the euphoric emotions that you experience when falling in love for the first time. The catchy beat invites listeners to dance along and complements the carefree theme of the song. “When you are in love, you are often on your own planet and very willing to forgive your loved one’s mistakes,” explains the four band members about the meaning behind their debut single, which also beautifully showcases their vocal ability. “We hope that when audiences listen to it, it will take them back to the time when they first fell in love and that it will make them relive those feelings for a second or two.”

ONE VOICE, the band’s debut album boasts nine cleverly mastered songs (a mixture of Afrikaans and English material) with lyrics and themes that audiences of all ages will be able to relate to. Six of the tracks are brand new, original compositions that will satisfy even the most critical of ears. “We decided to use the group’s name as the title of the album in an attempt to introduce ourselves and our music into the local market,” the girls share. “Each of us can play at least one instrument and the songs chosen for the end product were the ones that we could identify with.” Impressive covers of the existing hits, Sucker, Ugly Heart and Secret Love Song, also form part of the album playlist.

The girls regard their first album as the highlight of One Voice’s career so far and feel that they are each other’s greatest inspiration. “Although we have not known each other for a long time, we had an instant connection and get along very well. We all share the same dream and our goal is to make our mark in the music industry. Before every performance, we pray together because without the Lord we would not have the amazing opportunity to do what we love,” the all-girl group says.

According to One Voice, all of the songs on their new album are close to their hearts, but they believe that DROOMPLANEET and Wake Up have the potential to be big hits, because they are already a favourite with crowds at their shows.

ONE VOICE, which consists of Kalinka Kilian, Carla Strauss, Karma Coetzer and Janke Bester, was formed in 2018 after the girls met and decided to combine their skills to create something new and exciting in the local market. The band is passionate about music and exudes a captivating energy on stage. “Our name represents the fact that all four of us have something unique in our voices, but when we sing together everything comes together perfectly to create one voice. And we all have one goal with our music – to become famous and release many more successful albums and radio hits.”

Since the group was founded, the foursome has performed at various schools, festivals, restaurants and functions, including Eldoraigne High School, LemonJack Theatre, Centurion Theatre, Oppi Stoep, NG Church Rooihuiskraal, Platteland and more. When you ask them which musicians have had the biggest influence on their own style, they reveal that Little Mix, GRL, Fifth Harmony and Shine 4 are their biggest musical inspiration. Spoegwolf, Karen Zoid and Early B are also listed as local artists with whom they would love to work someday if given the opportunity.

THE LADIES BEHIND THE LYRICS

Kalinka Kilian discovered her passion for music as a little girl when her parents bought her a pink Barbie speaker and microphone. She was barely ten when she started with formal vocal training and since then she has also learned to play various instruments and wrote numerous songs. In her free time, this nineteen-year-old Music Technology student enjoys exercising and improving her skills as a musician. Her sense of humour and positive attitude towards life, is what motivates the rest of the group during stressful situations. Kalinka listens to a wide variety of genres and shares that she would have liked to be an occupational therapist if music was not her passion.

Carla Strauss, who describes herself as the problem solver in the group, has been singing since she was in grade two and there is nothing on earth that she would rather be doing. According to this soulful eighteen-year-old it was her musician brother’s passion for what he does that made her fall in love with music. Keaton Henson is credited as the artist who has had the greatest influence on her own style and she believes that music truly has the power to change the world.

Janke Bester was able to sing even before she could talk and started with vocal lessons at the age of ten. According to the nineteen-year-old Pretorian, she has a very down-to-business personality and likes to take charge and get things done. If she had to choose a different career, she would have liked to be a designer or paramedic, because she would have liked to help people in need and also has a very creative side. Although she loves Pop, Rock and Folk music very much, Julia Michaels and Noah Kahan are credited as her biggest musical inspiration.

Karma Coetzer describes herself as a shy introvert whose passion for music comes to life on stage. She is responsible for the soprano voice and harmonies in the group. In grade ten, she wrote her first song and released it on digital platforms, followed by several others. The opportunity to perform as part of a group of hand-picked singers in America is one of this animal lover’s greatest career highlights so far and she dreams of being a positive role model to her followers. This talented musician is currently studying Occupational Therapy because she would love the opportunity to help people. Karma relates to artists like Jo Black and Lauren Daigle’s spiritual music.

Touching people’s hearts with their music is this talented music group main goal and they are currently busy preparing for upcoming shows and writing new songs for their next album. The music industry has taught them not to let obstacles stand in the way of success and they are excited and positive about the future.

DROOMPLANEET is not only a spectacular introduction of One Voice’s talent to listeners and radio stations, but also showcases their ability to create something exceptional in a musical style that can be very ordinary.

ONE VOICE and DROOMPLANEET are now available for download on all digital platforms here: