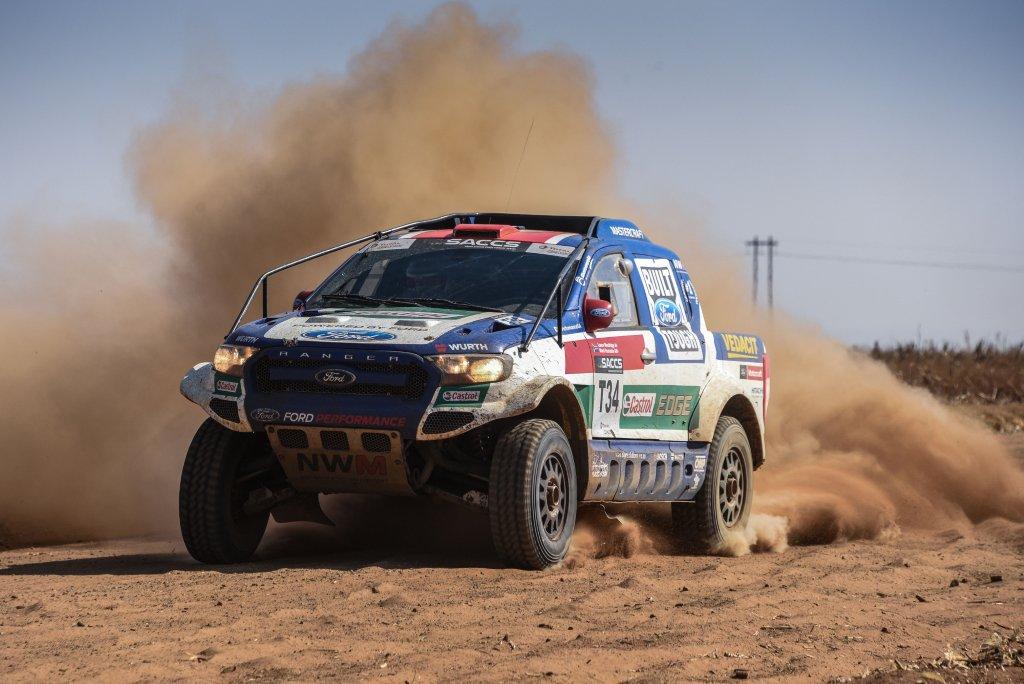 Brian Joss – The exciting and extremely competitive South African Cross Country Series (SACCS) has hit the home stretch, with the Lichtenburg 400 selected as the penultimate round of the championship, taking place on 13 and 14 September.

Harrismith was originally scheduled for this fifth round, but exceptionally dry conditions and a high risk of fire in the area resulted in the organisers having to move the race to the North West town at short notice. Lichtenburg has hosted several national SACCS races in recent years and is sure to provide plenty of action in the Production Vehicle category.

There has been a common thread running through the Class T championship this season, as the Castrol Ford Cross Country Team’s Lance Woolridge and Ward Huxtable have made the top step of the podium their own with a clean sweep of five victories (including the two separate races that made up the Botswana Desert Race in June).

As the reigning champions, the crew has been untouchable in the Neil Woolridge Motorsport (NWM) built and run Ford Ranger (T34), putting them on the brink of a second consecutive title this year. A finish in the points in either of the two closing rounds will hand them the Class T crown.

“We’ve had an amazing year so far, with Lance and Ward performing faultlessly throughout the season,” says NWM team principal Neil Woolridge. “The hard work that has been put into developing the Ranger this season has certainly paid off, and it reflects the long hours and dedication of the team as a whole.

“It’s a pity that we won’t be racing in Harrismith, as it is much closer to our home base and our many supporters from KwaZulu-Natal who normally come to the race, but the change in venue is completely understandable following an exceptionally dry winter,” Woolridge adds. “The sport relies on the support of local farmers for us to race on their land, and the potential of a fire would be devastating for their livelihoods.

“Lichtenburg is a good choice as a replacement venue, and we did when we last raced there in 2017, finishing on the podium with two of our cars. Hopefully, Lance and Ward will maintain their impressive run of victories and wrap up the championship with a race to go.”

Marcos Baumgart and Kleber Cincea will once again be competing in the second Ford Ranger (T20), fresh from finishing fourth at the arduous Rally dos Sertões in Brazil. With almost the entire South African NWM crew in action servicing no less than seven vehicles, the eight-day 6 000km event was dominated by the V8-powered NWM Ford Rangers that are built at the team’s workshop in Pietermaritzburg. Marcos’ brother, Cristian Baumgart, along with co-driver Beco Andreotti finished second, with the overall victory going to Lucas Moraes and Kaique Bentivoglio – an unprecedented fourth win on this event for the NWM Ranger.

“Our continued success in the South African championship, and our fourth win in a row in Brazil, prove that we have a very good package in the Ford Ranger,” Woolridge states. “The team has been exceptionally busy, but our continued development of the vehicle has brought great results that we can all be extremely proud of. We are eagerly anticipating another good outing in Lichtenburg.”

The Lichtenburg 400 will be based at the town’s showgrounds as usual, with the route heading south towards Coligny before turning east to Koster, then north back to the start/finish.

Qualifying on Friday 13 September determines the starting order for Saturday’s main race, which comprises two loops separated by a mandatory service stop at the designated service park located in the showgrounds. With easy access to the route along major roads, the event will be easily accessible to spectators.

Fans can follow the action and track the position of the crews throughout the race using the RallySafe app which can be downloaded free of charge for iOS and Android devices.