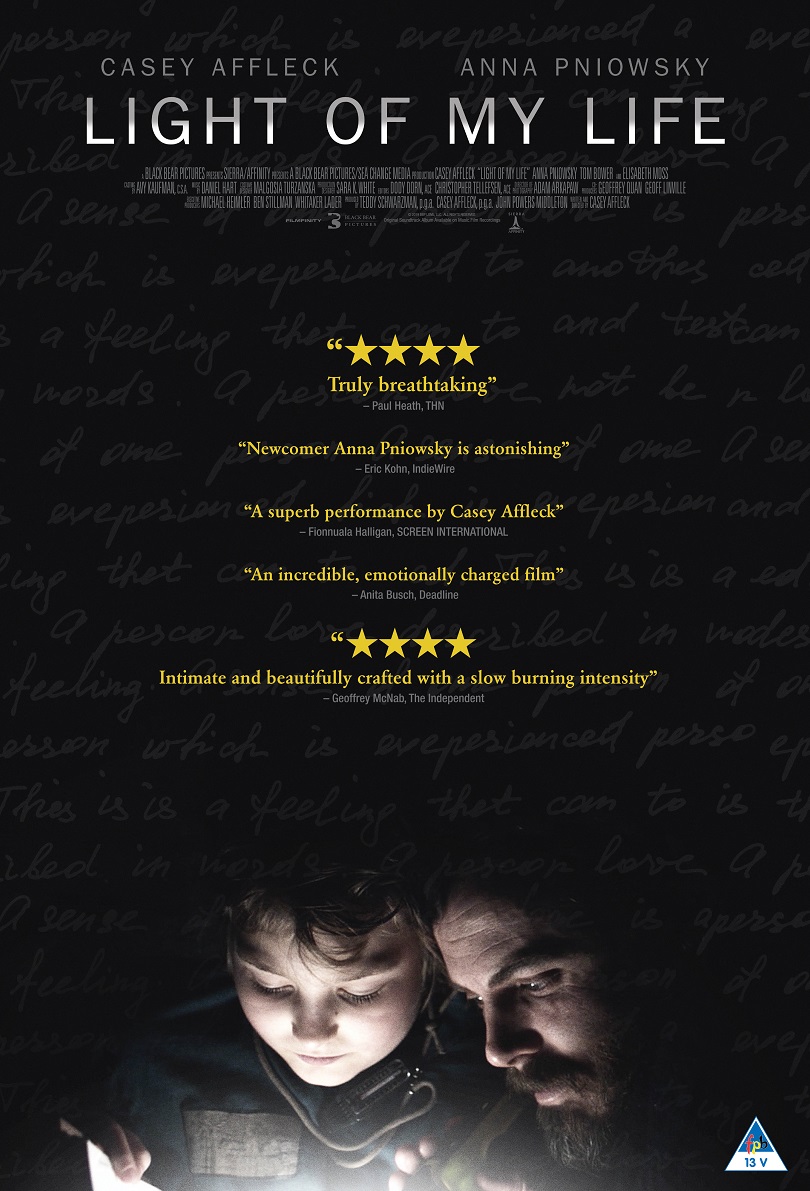 The timeless story of a parent dedicated to a child above all else is one everyone can relate to. Set in a post-pandemic, dystopian landscape following a plague that killed nearly all the world’s females, director Casey Affleck’s LIGHT OF MY LIFE is a narrative feature film based on the Oscar-winning actor’s own script, which mixes a survivalist drama with a coming-of-age story.

Explaining the rationale behind the film, Affleck says: “This is a very personal movie for me. I began writing this story a decade ago. As my children aged, the experience of being a parent changed. The story I was telling changed. After going through a divorce, the story took its final shape. Despite all the science fiction, this is a story about being a single parent grieving the loss of a nuclear family.”

The film takes place in a spookily deserted landscape, where a father and daughter, in an attempt to survive, live in a tent and forage for rations in the woods. Keeping to themselves, the loving character Dad (Affleck) teaches his 11-year-old daughter, who is somehow immune to the ‘female plague’, about ethics, history, morality, and how to live off the land.

But a chance encounter threatens the precautions he has set up, risking the refuge he has created. In a world now populated only by men, he tries desperately to protect his daughter Rag (newcomer Anna Pniowsky), while honouring and empowering the young woman she is becoming and reminding her of how much her mother (played in short flashbacks by Elisabeth Moss) adored her.

For her safety, and because it’s impossible to tell the good men from the bad, Dad has chopped off Rag’s hair and dressed her in boy’s clothing, passing her off as his son and staying largely away from towns and what’s left of population centres.

The relationship between father and daughter is the beating heart of LIGHT OF MY LIFE and the chemistry between Affleck and Pniowsky is best sampled through their father-daughter exchanges, particularly as they talk in their weathered orange tent at night. The interior of the tent, lit by small lamps, accentuate the intimacy and rapport they have.

These scenes punctuate LIGHT OF MY LIFE, highlighting what’s most important to these characters – the parent-child bond and the sense of security they’ve created. There is genuine affection and empathy for and between father and daughter, and a shared love for stories about the world as it was and as they’d like it to be.

A wonderfully understated performer, Affleck does excellent work. Talking about his performance, he says one of the keys to figuring out who Dad was within the story was making sure the connection between parent and child felt real to him as a parent of two kids.

“Strangely, the first thing I wanted to find was a believable dynamic of parental irritation, because it’s an expression of love that, in a way, is less obvious. Sometimes, when your kid is doing something dangerous, you’re worried about them, so your love is in a different gear. There are a few moments in the film when Dad loses his temper with Rag, and I wanted those scenes to be right, so it’s understood that these two people love and care about each other in a realistic way.

“Some of the other keys were trying to balance two sides of the character. Dad is confident that he is totally capable of taking care of Rag, protecting her, raising her, fending for the two of them, but also has a deep feeling of loneliness and panic in him. To be able to put all of that into the same character in the same scene was interesting.”

He also has a minimalist approach behind the camera, which is supported by cinematographer Adam Arkapaw, who manages to compose a series of shots that make even the bleakest locations seem somehow beautiful. His colour palette of greys, pale whites and browns is controlled, and the landscapes vibrate with menace, in stark contrast to their beauty. Daniel Hart’s score is melancholy and ominous. Together, all these elements ensure that there is a quiet sense of grace and humanity that shines through in LIGHT OF MY LIFE.

Just as the father finds it nearly impossible to explain the world to his daughter, the film resists explaining everything to its audience. As humanity is collapsing, the shadow of real-life anxiety grows, and the film taps into the primal fears of people, particularly parents, everywhere.

“I wish I could take credit for wanting to comment on things or depicting a world that parallels, in some ways, the point we’re at now. In truth, I didn’t have any social commentary in mind when I was making it,” says Affleck. “But one reason I love the arts is it’s a way of talking about our world in a not-so-literal way; those things may have found their way into the movie, but what I was making was a story about learning to find a balance between both keeping the world out and letting the world in, keeping your kids protected and letting them go, protecting them while preparing them to protect themselves.”

LIGHT OF MY LIFE is, at its heart, a portrait of a father and his daughter, and what he will do in order to keep her safe. It is a beautiful dramatic thriller that is an observation on parental love in broken times and the instability of society, and a compelling parable of letting go.

LIGHT OF MY LIFE is distributed by Filmfinity (Pty) Ltd. and will be released in South African cinemas on 18 October 2019.

For more information on LIGHT OF MY LIFE, including official trailers, please visit our Facebook page: http://www.facebook.com/sterkinekorent , using #LightOfMyLifeFilm_SA.