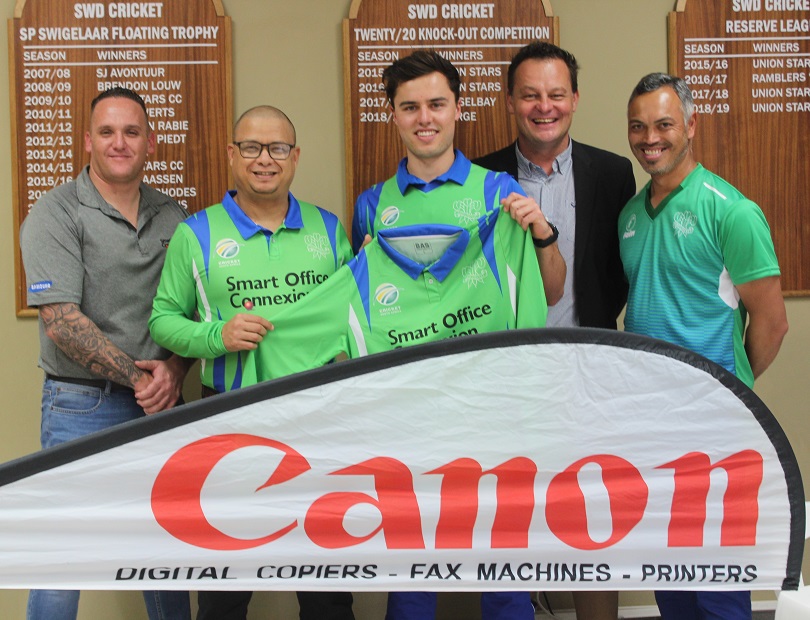 10 September 2019: SWD CRICKET received a welcomed financial injection this week when it was announced that Smart Office Connexion will be the team sponsor for SWD for the Provincial T20 Cup (formerly known as the Africa T20 Cup) for the fifth consecutive year.

SWD, drafted in Pool B, will head north to Kimberley this weekend to play alongside the hosts, Northern Cape, Boland, Eastern Province and KwaZulu Natal Inland.

“We have a long association with SWD Cricket and are proud to be involved with an organization that strives for excellence and is a respected business partner,” commented Marcel de Ridder, Business Director for Smart Office Connexion  “SWD has shown tremendous growth and results both on and off the field and we are looking forward to their Provincial T20 Cup campaign.”

Albertus Kennedy, CEO of SWD Cricket, commented: “We are grateful for the ongoing support with our business partners and we are looking forward with confidence to our team’s ambitions for this coming weekend”.

SWD President, Rudi Claassen, commented: “We thank Smart Office Connexion for their ongoing support towards our brand. I am sure their involvement will be a huge boost to our players and to the game generally in our area.”

The SWD team will be captained by former SA U/19 player, Jean du Plessis and will be be boosted by four Cobras franchise players –Aviwe Mgijima, Tladi Bokako, Nandré Burger and Akhona Mnyaka.  Together with local heroes such as Niel Hornbuckle, Brendon Louw and du Plessis SWD will have a decent line-up for this weekend.

SWD coach, Baakier Abrahams, was confident ahead of the weekend’s pool matches.  “We take confidence in our preparations and there is a vibe of excitement for the weekend”.  Abrahams and his troops will be keen to improve on last season’s performances but they will face some real game breakers in the Diamond City.  Aubrey Swanepoel, Obus Pienaar, Grant Mokoena and Patrick Kruger (Northern Cape), Rob Frylinck, Kyle Nipper and Cody Chetty (KZN Inland), Marco Marais (Eastern Province) and Ferisco Adams, Hanno Kotze, Simon Khomari and Lizaad Williams (Boland) are experienced game breakers in white ball cricket that will test Jean du Plessis and his men.