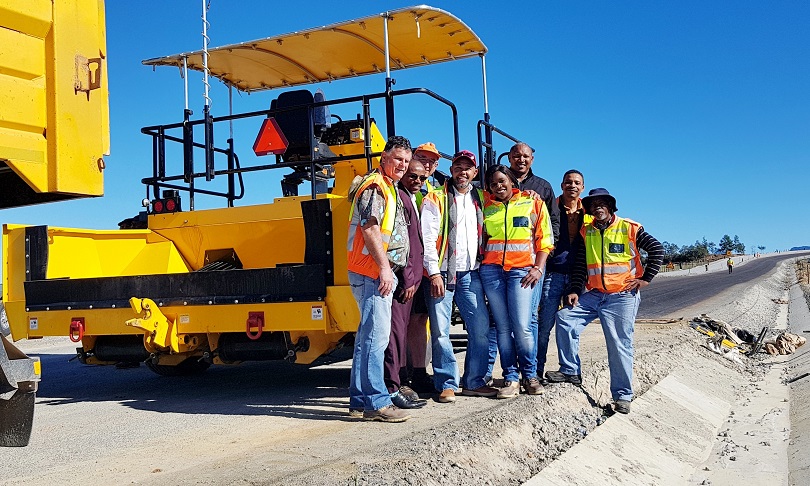 Officials from the Garden Route District Roads and Transport Planning Department, on 6 September 2019, welcomed a brand new Chip Spreader to their yellow fleet, at a road construction site in Friemersheim near Great Brak River.

The main purpose of the machine is to ensure a good quality of road surface dressing work. These machines are designed to accurately apply a controlled amount of stones to a road surface during a road sealing or resealing process. When officially handing over the machine, Mr Handler said: “We have many machines of this kind operating in South Africa, but this is the first for the Western Cape”. Mr Handler furthermore explained the benefits of the machine, that it covers a wide area of three meters and can extend to cover a road width of six meters. “The spreading mechanism is fully computerised; therefore any spreading amount can be registered on the computer,” he added.

At the same occasion, Mr Daniels also announced the appointment of Ms Simile Mqota as Deputy Manager for Roads and he emphasised that Ms Mqota is the first African female in the Garden Route district to be appointed in a position of this nature.  Mr Anton Steenkamp previously filled the position, but retired earlier this year.  Mr Steenkamp will now mentor Ms Mqota for 18 months to ensure a smooth handover of all duties related to the post.

During his address at the ceremony, Cllr Rowan Spies praised the Roads and Transport Planning Department for the developments and progress of the department over the past year. He said:  “It is heart-warming to see how much change is coming to the Garden Route, especially with regard to the diversity and expertise of the team. Cllr Spies added:  “This Chip Spreader is an impressive machine, but the Roads and Transport Planning team, is more impressive”. Cllr Spies also shared a word of gratitude to Mayor Booysen and said:  “Thank you for allowing the Municipal Manager and officials to take forward a vision of what Garden Route aims to be and can be”.

In his address to all stakeholders present, Mayor Booysen highlighted:  “This is once again a moment to be proud of, as we continue to be a leader in experiencing new things. We have to use this machine to the benefit of the economy of the Garden Route,” he added.  In his congratulatory remarks to Ms Mqota, Mayor Booysen further said:  “This event is also a confirmation that we are a leader in empowering our staff – more specifically our women”. Mayor Booysen further requested all male employees at the site to support Ms Mqota in her new position. He furthermore shared a word of appreciation with Mr Anton Steenkamp for his 24 years of dedicated service to the organisation. He also thanked him for his willingness to mentor Ms Mqota and to share his valued skills that will only benefit the road users and economy of the region.