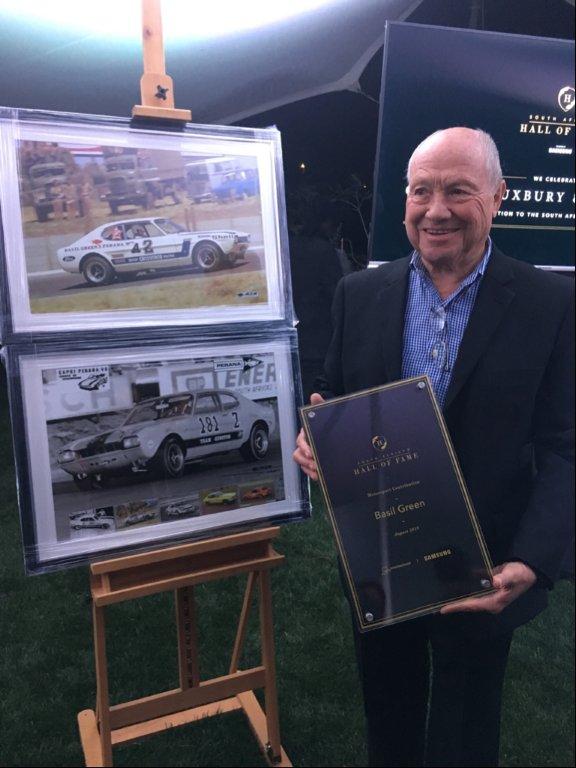 Brian Joss – As the man behind the legendary range of Perana-branded fast Fords which dominated local motorsport and performance road cars in the 1960s and Seventies, Basil Green has been honoured for his remarkable achievements by being inducted into the South African Hall of Fame.

The SA Hall of Fame serves to tell the stories of extraordinary achievers, recognising their outstanding service and overall contribution to sport. In motorsport circles, South Africa has produced numerous famous names that have excelled locally and internationally, including the likes of Sarel van der Merwe, Ian Scheckter, Wayne Taylor and multiple Formula 1 championship-winning designer Rory Byrne – such that they have been honoured by the SA Hall of Fame alongside golfing icon Gary Player, and one of the country’s most famous and admired citizen, Nelson Mandela.

For 82-year-old Basil Green, the nomination and subsequent formal induction to the Hall of Fame, which took place at Johannesburg’s Steyn City Parkland Residence in conjunction with the fourth annual Concours South Africa, , it was a fitting tribute to his decades of dedication and excellence in motorsport and the motor industry in general.

Speaking about his induction into the SA Hall of Fame, Green says: “It is a great honour to receive such an accolade. It’s difficult to put into words what this means to me, particularly when one considers previous recipients such as former President Nelson Mandela. I am truly humbled and grateful to everyone who made this possible, and also to the many people that played a role in our success over the years.”

“Basil Green created the era-defining fast Fords that were unbeatable on the track and unmatched on the road, combined with such engineering excellence and dedication to detail that various evolutions of the Perana Cortina, Capri, Escort and Granada were not only approved by Ford, but were officially sold through the countrywide dealer network,” says Neale Hill, MD of Ford Motor Company of Southern Africa. “Many of his modifications to standard cars were world-firsts, and Ford even incorporated some of his developments in the production model local line-up.

“Along with the road cars, Basil Green’s exploits in the motorsport arena were truly exceptional and came to define the period, with his multiple championship-winning Capri Perana V8 being the most memorable.” Hill adds.

“On behalf of Ford Motor Company of Southern Africa, we congratulate Basil on his induction into the SA Hall of Fame, and commend him for raising the bar in the automotive, aftermarket and motorsport sectors over many years.”

“He has been an exceptional ambassador for Ford, having played a significant role in building the industry we know today. He was instrumental in lifting the profile of Ford through his Perana cars, in racing, and as a Ford dealer, and helped create a loyal and proud following for Ford that continues today,” states Hill.

Such was the dominance of the mighty Capri Perana V8 that its famous Group 5-specification car, number Z181 with its distinctive orange Gunston livery and driven by Bobby Olthoff, won 13 of the 14 races in the 1970 season. It was capable of over 270km/h on the old Kyalami circuit’s long main straight, and topped the saloon car lap records at every one of South Africa’s circuits, using a highly tuned V8 with a high performance Weber carburettor for each cylinder.

With the rules changing from Group 5 rules to the more production-based Group 2 formula in 1971 in an effort to level the playing field, the Capri Perana remained the class of the field, with car number A2 taking the title.

Fortunately both cars have been carefully restored and remain part of prized collections in SA, and are used on selected outings at historic racing events.

The road-going Capri Perana V8, on which the race cars were based, was immensely successful, with estimates of around 500 having been built by the Basil Green Motors team. It soon developed a cult following, and the handful of original cars that remain are highly prized locally and internationally, and are extremely valuable.

“When the Capri was introduced by Ford in 1969, we fitted a V6 engine as they were all four-cylinder models at the time, with the V4 being the top of the range,” Green recalls. “We sent one of our Capri V6 models to Ford for evaluation and engineering approval, and they liked it so much that they started building their own 3.0-litre V6 model based on our car, which was a first for Ford in South Africa, and globally.

“We then looked at what else we could do with the Capri, and ended up with the lightweight V8 engine from the Mustang, sourced from Windsor Export Supply in the US, which was specially built to our requirements,” he adds.

“We also changed the gearbox, suspension, brakes, wheels and tyres. The bodies were produced at Ford’s Port Elizabeth plant and shipped to us, where we did the rest of the work.”

Tested by Car Magazine in January 1971, the Capri Perana was the only Ford-sanctioned Capri V8 in the world, and was the fastest locally produced car in South Africa. It was capable of accelerating from 0-100km/h in a mere

6.7 seconds, and reached an impressive top speed of 228.4km/h. New, it sold for R4 450 through Ford dealers with a full factory warranty.

Although the Capri Perana is the most iconic model, it was preceded by several years of top-notch performance modifications for various cars during the 1960s, resulting in the company’s extremely popular, high-quality aftermarket kits being sold locally and exported to the UK. Interestingly, another of SA’s motorsport legends, Willie Hepburn, formed part of the Basil Green Motors team during the founding years and the subsequent Perana era.

The Perana brand was formally introduced with the Ford Cortina Perana in 1967. The name was actually chosen by Basil’s wife, Paddy, and derived from the ferocious South American piranha fish species.

Based on the Cortina Mk2 2000 GT, it was fitted with the renowned Essex V6 engine and drivetrain from the Ford Zephyr, along with upgrades to the suspension, brakes and use of what was then sporty 175×13 radial tyres on distinctive alloy rims. It cost R2 850 out the box, and established an outstanding racing pedigree for the Perana brand, claiming several SA Saloon Car Championship titles. This was followed by the Cortina Mk3 Perana V6 in 1972, which predated Ford’s popular Cortina ‘Big Six’.

Other noteworthy Perana models were the 1969 Escort Mk1 Perana, based on the Escort RS1600, to which Basil Green Motors fitted Ford’s venerable 2.0-litre OHC engine in place of the complicated original 1.6-litre unit used in European markets. It proved an inspired choice, powering its way to numerous local race and rally titles.

A later effort in 1993, based on the front-wheel drive 1.6-litre Escort XR3, proved exemplary once again, with the hot Perana version boasting almost identical acceleration times and a higher top speed than the Ford Cortina XR6 of the same period. The company also offered tuned 3.0 and 3.4-litre versions of the Ford Sapphire in the early 1990s.

Besides the outstanding performance of his fast Fords, Basil Green’s association with the company was firmly entrenched when he was appointed a Ford dealer in 1974. Green and his team won numerous Dealer of the Year awards over the years for his landmark operation in Edenvale, which still proudly carries his name today as part of the SuperGroup conglomerate.

The story behind Green becoming a Ford dealer is an intriguing one, as it involved Ford Motor Company’s global president at the time, Lee Iacocca, who heard of the local team installing the Ford Mustang-derived 5.0-litre V8, as used in the Capri Perana, in the upmarket Granada Mk1 launched in 1972.

“One day Lee Iacocca phoned me and said that he wanted one of the Granada V8s we were building, so one was sent over, only for him to call me back and say the steering wheel is on the wrong side,” Green reminisces. “So it was arranged for a left-hand drive Granada to be sent to us from Germany. We managed to do the modifications in about a week, and it was then flown to America.

“Lee, as he insisted I call him, phoned me a couple of days later saying the car is fantastic and that Ford doesn’t have anything like it in the US,” Green proudly adds.

With the Basil Green Motors team churning out Peranas as fast they could, it all came crashing down when the international fuel crisis hit in 1973-74, bringing an abrupt end to what was a booming business. “Motorsport was banned and we weren’t allowed to sell high performance cars,” Green muses.

“We finished off the remaining cars we had in stock, but we didn’t have a business after that.

“Lee Iacocca contacted the chairman of Ford South Africa and told him to make me a Ford dealer, and we were given the Edenvale and Bedfordview sales areas,” Green adds. “We opened the first dealership in our workshop, put a new car on one of the ramps and added a shop window so we could drive the car out the front. I think we won Dealer of the Year from Ford the following year.

“I then built a beautiful Ford dealership in the main street of Edenvale, called Basil Green Ford, and that is where my long and proud relationship with Ford began.”