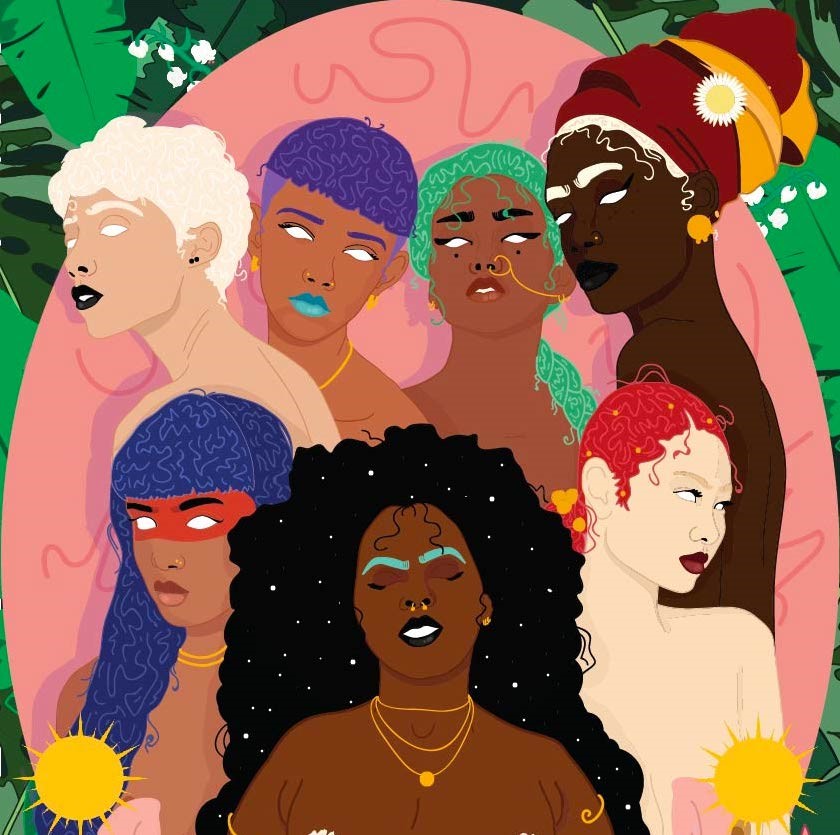 The writing and recording of “WOLF AT NIGHT” was made possible by Various Roots, an organization that funds projects by artists who create socially conscious works that encourage and inspire openness.

They believe that diverse media helps more people to see themselves in other people and everything around them.

In the effort to replace bigotry with empathy, to live in Ubuntu, Various Roots operates charity-first fashion, publishes written content, activates artists and musicians, and hosts events to introduce people to ideas from people and places they least expect.

To spread the power of this image, they installed it as a 20ft mural in the middle of New York City with the help of seasoned artist Lexi Bella. The mural was unveiled on March 8th, International Womxn’s Day.

They shared the image with two talented recording artists in Cape Town; Jayme van Tonder and Tatenda wekwaTenzi and asked if they would team up and create a song together, inspired by the illustration. The track exhibits the diverse range and electricity, yet organic vibration that could only hail from South Africa’s Rainbow Nation.

This is it. WOLF AT NIGHT.

“WOLF AT NIGHT” was recorded in June 2019 and the release scheduled for September 10th.  Early in September, wide-spread anger over violence against womxn and children erupted into a movement across South Africa. Next thing, van Tonder found herself to be part of a mass demonstration outside of Parliament in Cape Town on September 5th. Van Tonder says: “The energy was incredible. I felt our song come to life, less than a week before its release. We wanted the song to speak about the determination, drive, and power of the female life force through the woes and reality of women’s plight throughout history, and this was so powerfully expressed at the march as the womxn of South Africa came together.”

“I like this song because it talks about real issues that we’re facing as womxn, physically and emotionally, but it also has this groovy beat.” says Tatenda wekwaTenzi. “Even if it’s just 3 minutes, it’s 3 minutes of healing where you can move freely to the sound of womxn who acknowledge your pain and uplift you at the same time.”

“Though the state of affairs in our city has us shaken to the core, the fear we feel every day is not something unique to the women of South Africa. The momentum of #metoo, and now the accountability and action we are demanding with #enoughisenough will be the legacy and of our female generation. We will not give up on changing our culture until our story, womxn’s story, as victims of gender violence has been thrust into the annals of history and our sisters and daughters can live on more prosperous than we could have ever dreamed of as young womxn. With our song Wolf at Night, we hope to join countless other women in reclaiming our narrative as part of this movement.” said Van Tonder.

Shona lyrics were written by Tatenda wekwaTenzi, and the English lyrics were written by Hannes Muller (Slow Jack) and Andrew McDermott (Various Roots) as an ode to the power & unstoppable life-force of their female partners-being fierce and assertive like a “a wolf at night”, with the unrelenting determination of being “a womxn on a roll.”

Note to Radio Stations: if keen to receive the song for possible playlisting, please contact slowjackmusic@gmail.com