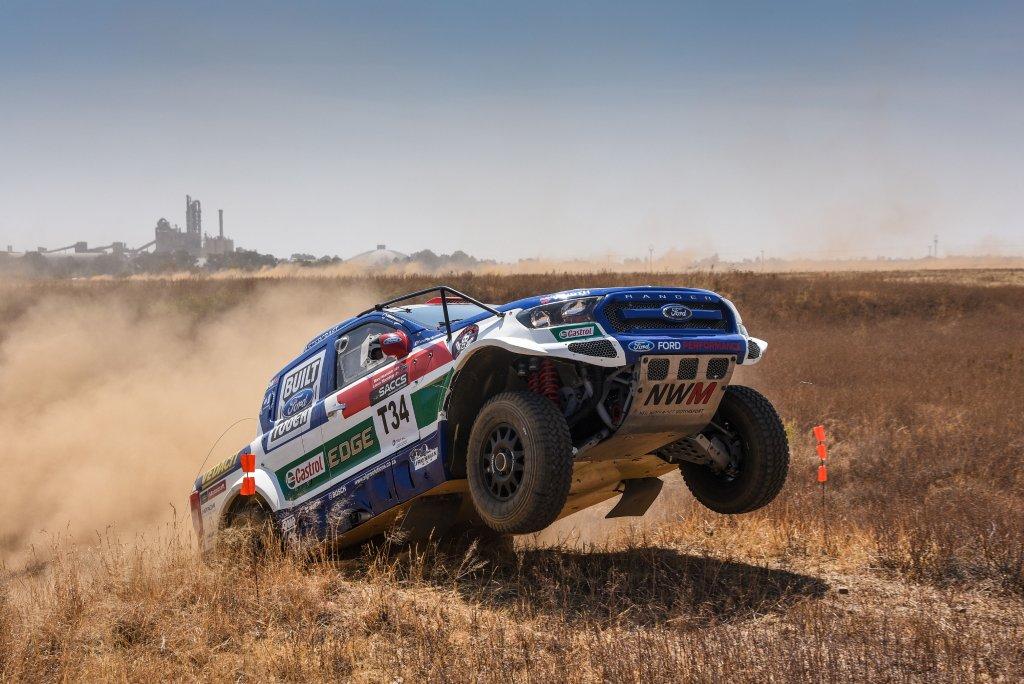 Brian Joss – Lance Woolridge and Ward Huxtable had plenty of reason to celebrate today when their season-long dominance of the Class T Production Vehicle championship was rewarded with a second consecutive title in the highly competitive South African Cross Country Series (SACCS).

As the penultimate round of the season, the Lichtenburg 400, hosted in the North West farming town, had all the makings of a superb weekend for the Castrol Ford Cross Country Team in the Neil Woolridge Motorsport (NWM) prepared and run V8-powered Ford Ranger.

Woolridge and Huxtable had a commanding lead in the championship standings going into this race thanks to an unbroken winning streak on all four preceding events.

(Toyota) and the Ford Ranger duo were determined to claw back the margin.

Their efforts were largely scuppered on the second half of the 189km opening loop, though, as they were caught in the dust of one of the two-wheel drive special vehicles, with no way of getting close enough to find a way past. Nevertheless, they made up time on team-mates Marcos Baumgart and Kleber Cincea (T20) in the second Castrol Ford NWM Ranger to slot into fourth place.

The exceptionally fast and open terrain was tackled flat-out on many of the farmland sections, with the competitors often topping 180km/h on the straights. The second loop was no different, with little opportunity for the reigning champions to make up time in the tight and twisty bits. They crossed the line fourth in class, only for a slew of penalties to be dealt out by the organisers for even the most marginal of speed transgressions on a last-minute change to the route, which included a short 500-metre deviation through the town of Coligny.

While they already had the Class T title in the bag with their fourth-placed finish, Woolridge and Huxtable were promoted to second place in the final results, thus adding yet another podium finish to their exceptional results this year.

“It is a very special feeling to win the Class T championship this year on the back of four wins in a row,” an elated Woolridge said. “We’ve had a perfect car this season and the team has done a fantastic job. We were aiming for victory, but it just didn’t go our way during the prologue on Friday, and we were on the back foot from there.

“However, after last year when the championship went down to the wire, it is great to wrap this one up early and take the pressure off for the final race, so we can go and have fun and fight for another race win.”

NWM team principal, Neil Woolridge, was equally delighted: “We have worked incredibly hard to develop our cars, and to ensure that the team is fit and well prepared. Our second Class T title in a row, with one race still to go, is a great reward for the effort and dedication of the team as a whole, and is superb for Lance and Ward who have been dominant throughout the year.

“It’s fantastic to have the backing of Ford, our title sponsor Castrol, as well as the rest of our partners and sponsors who make this all possible,” he added.

The Brazilian crew of Marcos Baumgart and Kleber Cincea notched up another solid performance and enjoyed a fault-free run throughout Lichtenburg 400 to finish fourth in the final results.

“It is great to compete in the South African championship as the racing is very competitive and the routes are extremely challenging,” Baumgart said. “The Lichtenburg race was very fast but we really enjoyed it, and NWM once again gave us a superb car. We look forward to coming back for the final event in November.”

The SACCS season finale takes place in Parys, on the banks of the Vaal River, on 1 and 2 November 2019.