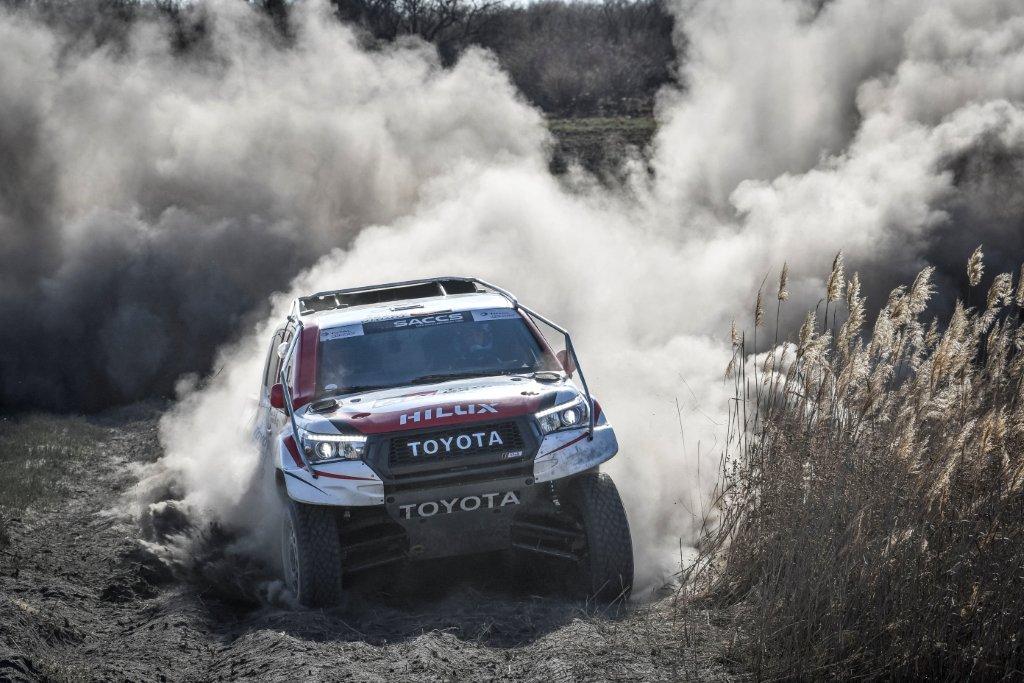 Brian Joss – Fernando Alonso and Marc Coma completed an eventful but invaluable learning experience at the Lichtenburg 400 in South Africa on September 13-14 with Toyota Gazoo Racing.

Following successful training sessions in Namibia and Poland, the Spanish duo entered round five of the South African Cross Country Series, their first rally raid competition together in the Toyota Hilux.

The crew completed a 300-kilometre Shakedown on the varied terrain of the competition route – as part of their training on September 12. This gave the pair additional seat time in the Hilux, while allowing Marc to familiarise himself with the event roadbook and onboard navigation systems used during the competition.

During the Prologue on September 13, which determines the starting order on race day, Fernando and Marc started the 55-kilometre route from 10th position on the road. Despite the dust kicked up by the leading pack, the crew showed strong pace over the early part of the route, eventually catching up and passing one of the competitors ahead to get themselves into clearer air. Fernando and Marc posted the third-fastest time overall just 32 seconds off pole, bested only by Toyota Gazoo Racing South Africa’s Henk Lategan and Giniel de Villiers also in the Hilux.

Starting from third position on race day, the crew experienced a soft rollover at the 27-kilometre mark. The windscreen of the Hilux was broken and the pair lost time to remove the glass before continuing. Despite the challenges, Fernando and Marc continued to the end of the 190-kilometre loop and posted competitive split times throughout the remainder of the first loop while wearing goggles to assist visibility in the dust.

At the midday service, the team raced to replace the windscreen and completed minor bodywork repairs on the Hilux in the limited time available.

Together with the event organisers, it was decided that the crew will start the second loop ahead of the field in clear air to gain quality mileage.

A bird strike five kilometres into the second loop, resulted in a second broken windscreen for the crew. Fernando and Marc again demonstrated their resolve to complete the final 190-kilometre loop while taking turns to hold the broken windscreen in place between driving and navigating. They continued to post competitive split times and were classified 16th overall.

In total, Fernando and Marc clocked up another 728 kilometres of training mileage during the Lichtenburg 400 which saw them traverse cornfields, undulating veld and dry river crossings. Even more invaluable than the mileage for the new Spanish pairing transitioning into a different discipline of motorsport, are the lessons learnt and experience earned in the white heat of rally raid competition.

The next challenge for Fernando and Marc as part of their intensive training programme will be the Rally of Morocco which takes place near the city of Fes, Morocco on October 3-9. Last year’s rally was won by reigning Dakar Rally champion Nasser Al-Attiyah and navigator Mathieu Baumel – their second consecutive Rally of Morocco victory with Toyota Gazoo Racing South Africa in the Hilux.

Seen as a precursor to the Dakar Rally, the route of the 2019 edition of the Rally of Morocco will feature a cloverleaf layout with five competitive stages all starting and ending near Fes. Competitors will navigate a total distance of 2,500 kilometres, of which 1,868 kilometres will be timed special stages, featuring a mixture of rough gravel tracks, sand dune crossings and tricky navigation.

Glyn Hall, Team Principal: “We certainly proved this weekend that Fernando has the speed and Marc has the ability to co-drive in the Hilux. Despite the ups and downs, this weekend was an invaluable experience for the crew. We are fast-tracking one of the best racing drivers the world has ever seen into a discipline he has never experienced before. With just five months to prepare for one of the toughest races in motorsport, we have an incredible task ahead of us. In the Prologue, we saw that Fernando can keep up with the best drivers in South Africa, who are as good as they come in the world.

Competing at this level in terms of speed, and with such a steep learning curve, we expected small setbacks along the way. This is exactly the kind of experience they need to have so it doesn’t come as a surprise if it happens during the big race. The determination shown by Fernando and Marc today is nothing short of impressive. The crew got back in the car and completed the first loop without a windscreen in the dust, and again in the second loop while holding the window up for most of the stage.”

Said Fernando Alonso: “Every time we go in the car we learn something and we get more and more familiar with the Hilux. Unfortunately, today was a little bit of a nightmare for us. In the morning, we rolled over a little bit and broke the windscreen which affected our visibility so we had to remove it.

We drove the rest of the loop with goggles on, in the dust behind all the cars. For the second loop the organisers allowed us to start in front, to have a clear view. After a few kilometres, we hit a bird and the windscreen broke again. Then it was nearly 200 kilometres with one hand on the windscreen and the other on the steering wheel. It wasn’t the best day for us, but we were able to get more kilometres in the Hilux and it’s good to experience these things before we get to more important races.”

Marc Coma, said that although we rolled the car at one point we managed to finish the loop. Then we started the second loop with a new windscreen to get more experience in the Hilux. After just a few kilometres, we hit a bird and it broke the windscreen. The wind and dust started to come inside the car, making it very difficult to drive to the end. It really wasn’t easy to hold the windscreen in place while navigating at the same time. With Fernando, we managed the situation together and got to the end of the race.

Even with all the challenges we faced today, we still managed to get a lot of valuable kilometres under our belt and we know that all of this is part of the experience we are gaining.”