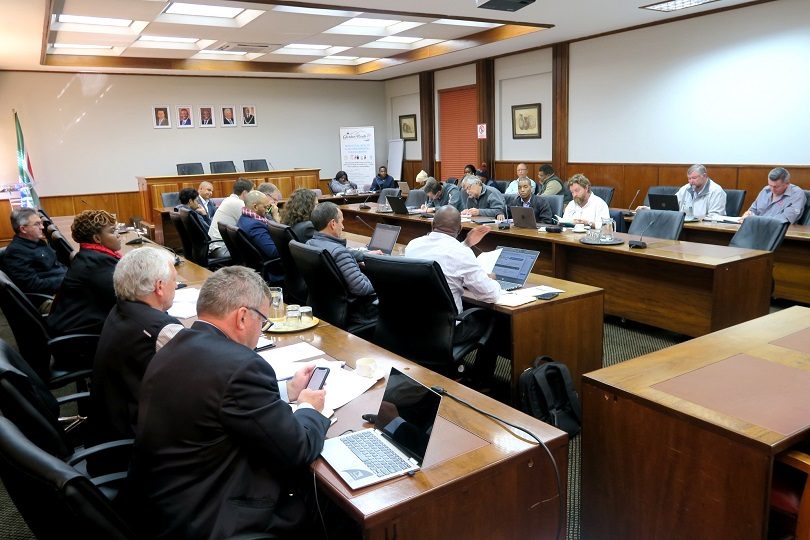 The 6th Garden Route Green Energy Forum was recently held at the Council Chambers of Garden Route District Municipality (GRDM) with representatives from municipalities in the Garden Route district, as well as relevant stakeholders in attendance.

During these meetings, green energy opportunities are continuously identified and the realities of green energy in the district discussed. When the GRDM Communication Unit conducted an interview with chairperson of the forum, Mr Passmore Dongi, Project Manager of GRDM, it became evident that the aim of the forum fits into the bigger picture – to reach two of seventeen sustainable development goals of the United Nations, which are: Goal 7 – Affordable and Clean Energy; as well as Goal 8 – Decent Work and Economic Growth.  Mr Dongi stated:  “These two goals are interconnected, as we want to use green energy to drive employment creation through this green energy initiative and bring sustainable growth”.

In the 1st State of the District Address delivered by the Executive Mayor, Cllr Memory Booysen, on 12 April 2019, Mayor Booysen emphasised our collective future – in particular, about the challenges we face in developing a secure, more resilient and sustainable energy system in the Garden Route region. In light of this, Mayor Booysen added that the GRDM Economic Development and Planning Department is doing a scenario approach to energy as the driver of the local economy.  “The scenarios cannot predict the future, but they can give us the tools to anticipate what could happen. In other words, they deepen our strategic thinking,” he said.

Mayor Booysen continued by saying that when looking at the future energy challenge and in aligning our functions and mandates, as stated in Section 84 of the Municipal Structures Act, we believe that three actions should be taken now to get us firmly on the road towards a more sustainable energy system:

Mayor Booysen added that around the world, we have already seen realistic energy policies put in place to prepare for a future in which energy demand will rise. “Therefore the GRDM is taking a pro-active role to address issues of energy and as such – we are the only District Municipality to:

“This goes on to show how much the district value and prioritise renewable energy as the future of the region. The country faces an incredible challenge to meet our future energy demand, to reduce greenhouse gas emissions, and manage the stresses on our water and food resources,” he added.

Mayor Booysen continued by stating that the GRDM believes governments and industry can take far-sighted actions now that will reap benefits for decades to come. “These actions include taking advantage of the region’s abundant natural resources, localised manufacturing and storage technology, and focusing on smarter urban planning. The District would also like to leverage some of its properties to support this goal of energy sustainability in the region that will, in turn, promote socio-economic development. We therefore remain committed to working with all the stakeholders to realise the region’s ambitious energy objectives of energy driven regional economy, energy driven job creation and energy driven livelihoods”.

Mr Dongi also referred to the various green energy projects that are already up and running or are still in progress, such as the solar park behind the GRDM head-office, the George Municipality that is busy with a process to put up solar panels on their civic centre and also Witsand, near Riversdale, that has a desalination plant powered by solar.  Mr Dongi furthermore made mention about the solar farm that will be built in Oudtshoorn.  “We intend to place much thought into wind energy, biogas, wave energy – as combination of various forms of renewable energy,” he said. In saying this, Mr Dongi emphasized the diversity and unique characteristics of the Garden Route and how the respective areas in the district can contribute to renewable energy. He made an example of what areas would be most suitable to unlock specific green energy opportunities, e.g. Oudtshoorn and Kannaland areas have the potential for solar energy, due to their long hours of sun, the climate and high temperatures, the coastline has the potential for wave energy and wind, to name a few. Through all these initiatives, we aim to become a pioneer that will drive the Garden Route nationally as the first district that is going green,” Mr Dongi concluded.

The District would like to encourage all citizens of this region to register their solar systems with the municipality’s SSEG programme. The next forum meeting is envisaged to take in October 2019.