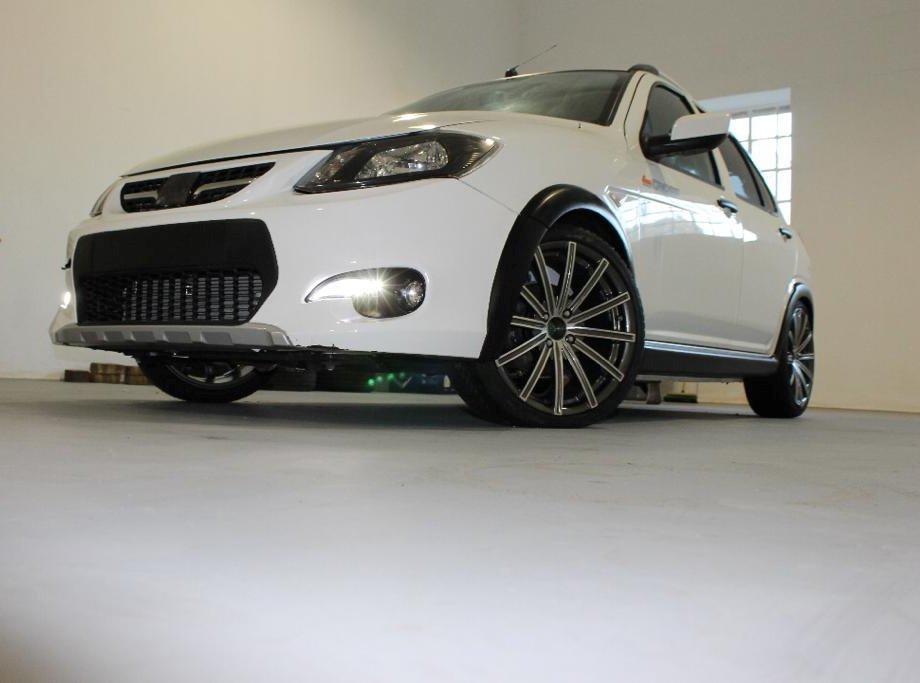 Mureza initially has a joint venture with the SAIPA Group in Iran for platform-sharing and the supply of some of the other major components, but Mureza’s ultimate objective is to design and manufacture vehicles in Africa for African drivers.

The first model, the Prim8 (pronounced Primate), is a crossover/hatchback which will be assembled initially from SKD kits in the Automotive Supplier Park in Rosslyn, South Africa, and later at the Willowvale assembly plant in Zimbabwe and in the ex-Hyundai plant in Botswana. The new business is being backed by funders in the United Arab Emirates.

The prototype Prim8 will be displayed on stand 6K4G in Hall 6 at Nasrec Expo Centre. It has been converted from left-hand to right-hand drive locally, but the future SKD and CKD kits will be set up for right-hand drive. A three-year warranty will cover the car.

The Prim8 uses a 1.5-litre petrol engine developing 87kW and drives the front wheels through either a five-speed manual or CVT transmission. The target is to offer the fully equipped top model at between R180 000 and R200 000.

The initial local content target is 40% with significant increases in the short to medium term, according to Tatenda Mungofa, one of a group of Africans from various countries who are driving this ambitious project.

Mungofa explains that there is a void between the new vehicles and used vehicles currently sold in African countries and says this is the gap his team proposes to fill with new models priced not much above the cost of a used import, which are heavily taxed in certain markets.

“We will also engage with the people selling used imports to retail our new models and will assist them in setting up service facilities where this is viable, or else we will appoint independent servicing outlets in the various SADEC countries that we are targeting as a first step for our new company,” explained Mungofa.

“Here in South Africa we are also looking to sell our various Mureza models through used vehicle outlets instead of setting up new car franchised dealerships. Online selling will be important for us too,” he added.

Iran is the largest vehicle market in the Middle East and also the largest manufacturer, while SAPIA is the second largest local vehicle maker which assembles cars for European, Chinese, and Japanese companies as well as developing a growing domestic design and manufacturing ability.

“South Africa is seen as the hub of the automotive business in Africa and it is for this reason that we are using this country as our headquarters and first assembly plant,” said Mungofa.

“We are looking at cooperating with smaller component suppliers who not yet able to handle big production runs and our business will help them grow their businesses. We are also looking for local entrepreneurs to get involved with the various facets of our business to give it a true African flavour.”

Mureza Auto Company has an ambitious product plan which starts with adding a half-ton pick-up, a sedan and high-riding mini-SUV off the Prim8’s X100 platform. There is even a battery-electric platform for the X200 platform under development in South Africa by Energy Doctors.

Next step will be the local development of a range of one-ton pick-ups and a panel van under the Tusker model name.

“We see our venture as revitalising the motor industry in several African countries and providing much-needed job opportunities. For instance, we are looking to building up employment at Rosslyn to 1 000 people, with a lot of focus on manual work, as we grow production from 10 to 35 units a day. We intend starting assembly early in 2020.

“We have been preparing for three years to make our dream a reality and we already have many important pegs in the ground leading up to our display of the Prim8 at Automechanika in Johannesburg. I have been involved in selling used imports in Africa for the past 10 years and I know that Africans want to own their vehicles, not share them. Owning a vehicle is very much a demonstration of success and we want to build on this culture,” concluded the Mureza executive.

Registration to Automechanika Johannesburg and the Futuroad and Scalex Expo is free. Visit: www.automechanikasa.co.za to secure your free visitor pass.