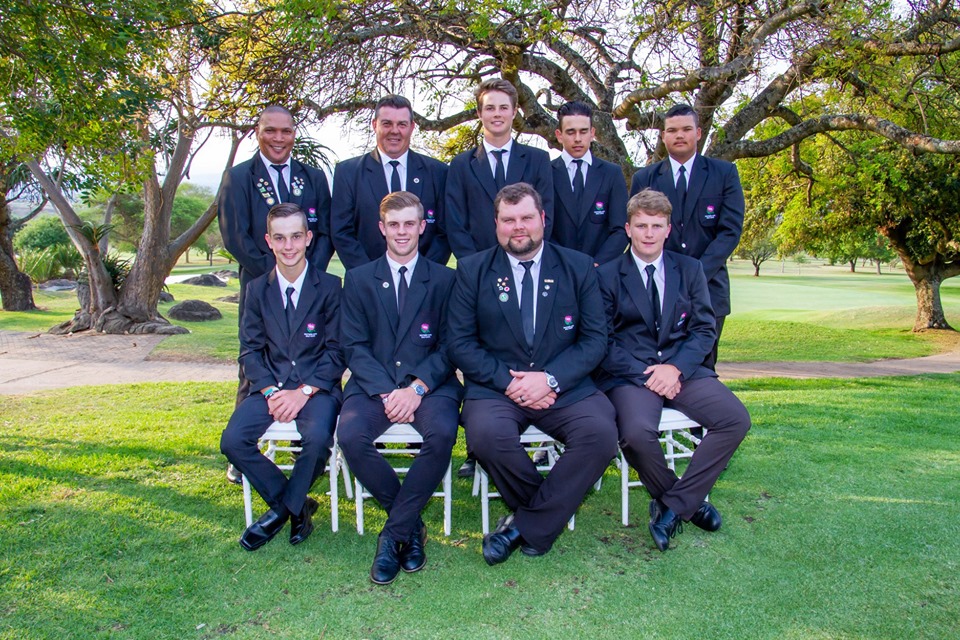 MBOMBELA, 17 September 2019 – Ekurhuleni took pole position in the A-Section at the 59th South African Inter-Provincial Tournament, sponsored by Tempest Car Hire, on Tuesday, while Boland threw down the gauntlet in the battle for promotion at Mbombela Golf Club.

“The boys were pumped to take on Gauteng North after beating Southern Cape in the first round, but we got absolutely hammered in the foursomes,” said manager Hugo Delport. “The boys knew the score. We were 4 – 0 down and they put their heads down, dug in their heels and started taking points back from the Daisies. But we had to work extremely hard to pull off a draw.”

Brandon Gildenhuys and Yurav Premlall set the tone with 6 & 5 wins, Aneurin Gounden won 5 & 4, and Casey Jarvis 3 & 2. Jordan Burnand beat Nicholas Souranis 2-up and it was down to Jayden Schaper at number one in the last match out on the course.

“Jay and Werner Deyzel were all square through 16, but after Deyzel lost 17 with a bogey, Jay shifted to fifth gear and his approach on 18 pitched three yards from the pin,” Delport said.

“He holed the birdie putt to win 1-up to secure the draw. The Daisies fought for every point in the afternoon session, but I believe my team’s fighting spirit was greater. We will have to go back to the drawing board with our foursomes pairings, though.”

Ekurhuleni will go into battle with Central Gauteng, who also had a fight on their hands against a feisty KwaZulu-Natal team.

The defending champions were 3 – 1 down after the foursomes, but Samual Mckenzie, Shaun Jones, Kian Rose, Steven le Roux and Wendell Bossenger helped the Lions to claw their way to a 6-all draw.

After their first round loss, Southern Cape got their title fight back on track with a decisive 7.5 – 4.5 win over Western Province.

Calvin Maia and James Murray halved their foursomes game against Luca Filippi and Kyran Hawkins to help the Garden Route side to a 2.5 – 1.5 lead, and Ivan Williams, Marlo Pienaar, Damian Osner, Martin Vorster and Maia did the rest of the damage in the singles.

The victory moved Southern Cape to fourth on two points, but the 2106 champions are well within striking distance of the leading three teams. Ekurhuleni holds the number one spot with three points and 14 game points, but Central Gauteng and Gauteng North – tied for second – also has three points and lag just a single game point behind.

Western Province, meanwhile, is perched on the bottom step after two successive losses and will have to stem the bleeding when they face KwaZulu-Natal in the third round or their promotion will be very short-lived.

Boland scored a clean sweep in the foursomes and continued the rampage to beat Border 11.5 – 0.5.

“Our new caps Aidon Willemse and Jurie Mostert, playing at eight and seven, both won 5 & 3 and Ryk van Schoor and Meyer Pauw at one and two both won 6 & 5 to guarantee us the win, but the rest of the guys never took their feet off the accelerator,” said manager Jaco Spies.

LB Boshoff and Ethan Smith won their singles 4 & 3, and Keagan Thomas added one point to their tally when he defeated Daniel van Seumeren 2 & 1. Phillip Swanepoel, hoping to deliver the whitewash, was denied by Oswin Schlenkrich, who halved the last game out on the course.

“After the first round win, the guys didn’t hold back and we’ve made the start we were hoping for, but with three tough matches to come, we are not counting any chickens yet,” Spies said.

Dillon Germshuys and Devon Strydom boosted the moral in the Eastern Province camp when the pair both holed hallelujah putts on the 18th to secure a 6.5 – 5.5 win against Mpumalanga.

“We were in trouble with just Devon and Dillon still out there. Then Devon sunk his par putt for a halve and a 5-all draw and Dillon got a great read off his opponent and drained a 20-feet snaking birdie putt that won the match for us,” said skipper Michael Holden. “This has put us right back in the fight and and the guys are gung-ho now to take the fight to Boland on Wednesday.”

The clash between North West and Free State also ended in stalemate after North West overturned a 3 – 1 foursomes deficit with five single wins.