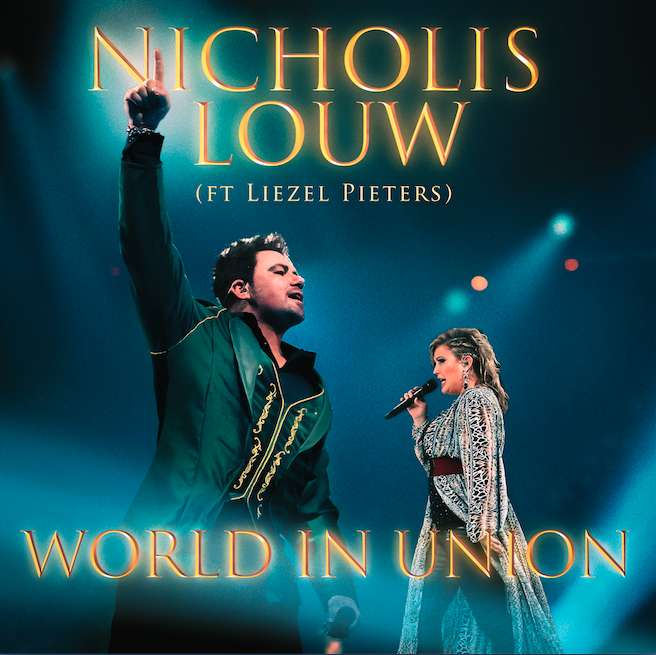 Nothing brings a country together more like sports and good music. With the Rugby World Cup vastly approaching, it is only fitting to support this historic event with a song that has become synonymous with victory and reconciliation.

Acclaimed and versatile super star, Nicholis Louw, and the highly gifted and talented singer, Liezel Pieters, have joined forces to release a heartfelt cover of the 1995 PJ Powers and Lady Smith Black Mambazo hit, WORLD IN UNION (previously recorded by Kiri Te Kanawa), which will not only satisfy the most critical ear, but will also transport listeners back to a time when this trophy brought hope to our nation.

“WORLD IN UNION is one of those big, epic songs that I have always wanted to cover. This year’s Rugby World Cup tournament provided the perfect opportunity to do so and I hope that our version will blow audiences away,” Louw explains about his decision to record this single. “Liezel Pieters is one of the few female vocalists who can really sing this song. I think she is one of the best upcoming artists in the country and that she has a very bright future in the local music industry. ”

According to the singer, WORLD IN UNION; with lyrics written by Charlie Skarbek and melody taken from the middle section of Jupiter, the Bringer of Jollity, a movement from Gustav Holst’s The Planets; is such a popular song throughout the world. Therefore, he believes that their version will also be very well received.

More than sixteen years in the music industry, various music awards and nominations, numerous number one hits on the radio and various albums with multi-platinum sales, have secured Nicholis Louw a permanent place in the South African entertainment industry.

The artist, best-known for his vibrant stage personality and highly entertaining performances, made his debut in the music industry in 2003 with his first album, My Hart Is Aan Die Brand, which was exceptionally well received. This was followed by eight very successful releases – Rock Daai Lyfie (2005), Hier Naby Jou (2007), Vergeet en Vergewe (2008), Elvis On My Mind (2008), Energie (2009), Ek Is Daar Vir Jou (2011), Gebed Van ’n Sondaar (2012) and So Rock Ons Die Wêreld Reg (2014) – which achieved gold, platinum, double-platinum, and triple-platinum sales. Some of his biggest hits include Ek wil my baby hê vanaand, Rock Daai Lyfie, Generaal, and many more.

Performing eighty to ninety shows per year, this versatile musician is constantly adding new elements to his repertoire, which already includes rock, pop, country and big ballads, and always manages to seamlessly incorporate classical elements into his shows, placing him in a league of his own.

Liezel Pieters is described as the Laura Branigan of Afrikaans music and has performed in numerous Barnyard productions over the years. Her strong voice won her a place in the Krone 2 music show in 2014, which opened many doors for her in the industry. Sing My Hart Uit, her debut album, was released in 2017 and delivered several successful singles, including Asemloos and Droë Riviere. The music video of her song, Droë Riviere, did incredibly well and has had more than a million views on YouTube. In Ons Bloed, her latest single was released in March 2019.

Nicholis Louw and Liezel Pieters’s voices are the perfect match in their gripping rendition of WORLD IN UNION. The song is a remarkable tribute to a sport with a rich culture and tradition and will also remind listeners to stand together when all seems hopeless. It’s definitely the perfect way to kick-start the 2019 Rugby World festivities and a must-have single for every rugby fan’s playlist.

The song will be released on all digital platforms soon.