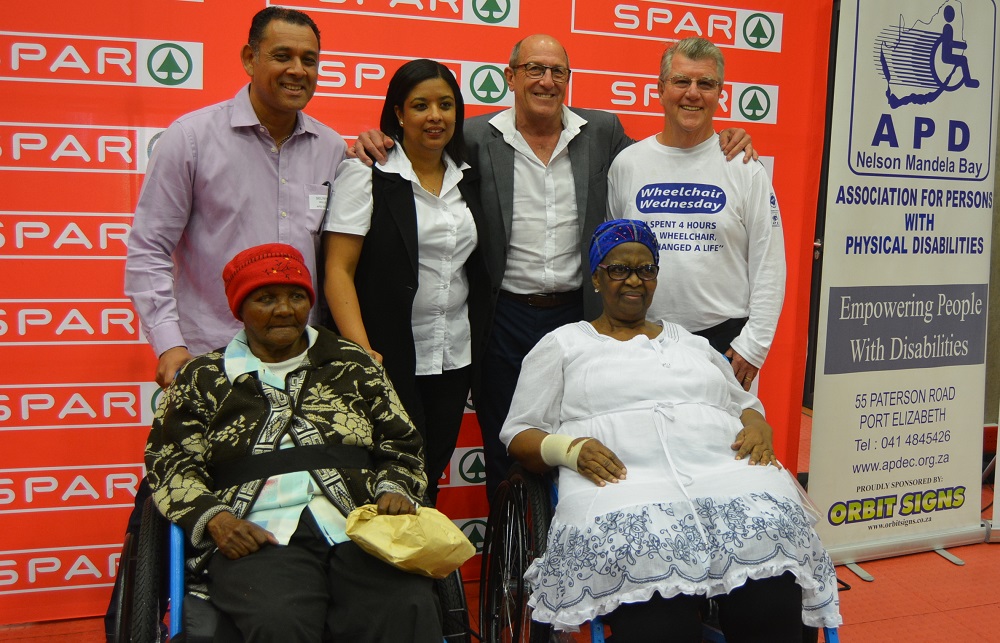 The SPAR Wheelchair Wednesday campaign rolled on to achieve one of its primary objectives when the 1 000th wheelchair was handed over to a deserving recipient yesterday.

It was a day of landmarks at the Nelson Mandela Stadium in Port Elizabeth when SPAR Eastern Cape and the Association for Persons with Physical Disabilities Nelson Mandela Bay (APD) celebrated the eighth year of the project’s existence at a final function.

From its start in 2012, when enough money was raised to donate 30 wheelchairs to needy users, the annual campaign has grown year by year.

In 2019, a record donation of 180 wheelchairs was made, taking APD’s target to past the 1 000-mark, while a total of R2.8-million has been raised in that time to assist with job creation at the organisation in North End.

Even more importantly, APD executive director Brian Bezuidenhout said, they were starting to impact on the younger generation.

“One of the big highlights was that more schools became involved this year,” he said.

“We had Collegiate last year and this time they were joined by Grey High, Lawson Brown and Pearson.

“We will have 10 schools participating next year and we want our future leaders to be aware of what the needs are out there.

“We need to teach them and to empower the future generation of our city, some of whom are sitting here [at the function] and have already been through the process.”

Bezuidenhout also paid tribute to the businesses which gave up their time to support the campaign.

“We had 41 companies this year and 182 participants and we are grateful to every one of you for being part of the campaign. You are the reason this campaign works.”

A highlight of the final function was an inspiring message by Nelson Mandela Bay entrepreneur Lindelwa Dabaza, who lost her sight when she was only 12. She has a daughter of three, who went blind in February this year.

Despite the challenges she has faced, Dabaza, who makes and sells bags, said it was essential to remove any negative thoughts you might have in difficult situations.

“I decided that it was no good saying, ‘why me’,” she said. “I just thought about what I could do to handle the situation and that helped me to change my mindset.

“It’s all in the mind and you have to be positive to make sure of a better life for yourself.”

In his keynote address, Nelson Mandela Bay executive mayor Mongameli Bobani assured the APD of the metro’s support and urged corporates in the city to throw their support behind the organisation.

SPAR Eastern Cape sponsorships and events manager Alan Stapleton said it was “very special” for the company to be part of the initiative.

“It’s an absolutely amazing achievement to reach 1 000 wheelchairs in eight years and part of our ethos is to help others to be more and to do more,” he said.

“And Wheelchair Wednesday ticks all the boxes because it not only assists those in need, it also helps other people to appreciate the difficulties of life in a wheelchair.

“It also exposes areas in our city where we have to improve facilities to make sure they are wheelchair-friendly and that everyone has access to the amenities, irrespective of their situations.”