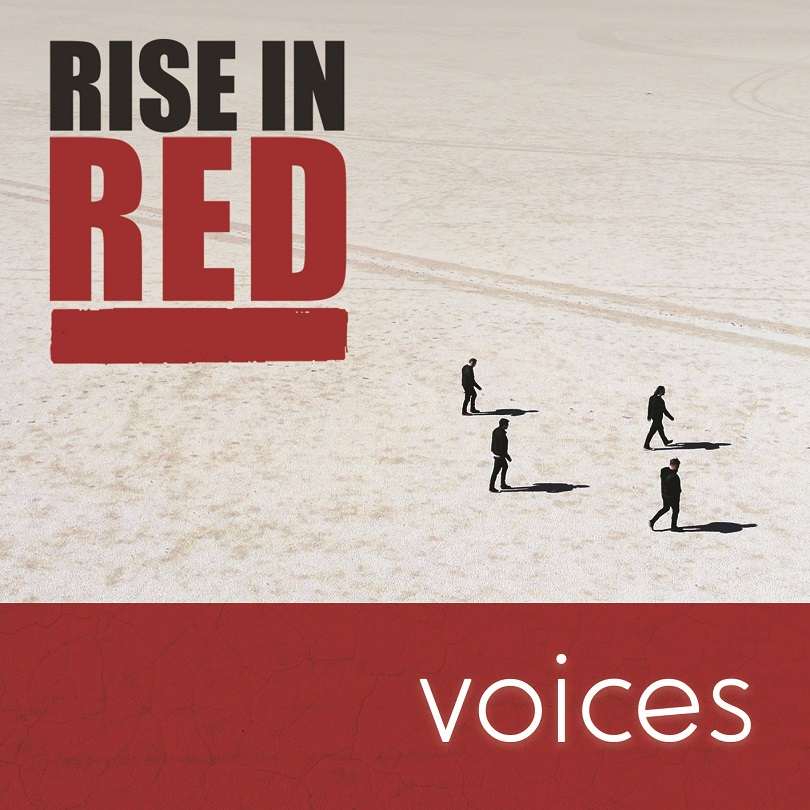 “VOICES is about allowing yourself to dream and to live the life you were meant to. It is about renewing and opening your mind to the possibilities that the world has to offer,” explains rock group RISE IN RED’s lead guitarist, Jayson Reynolds, about the meaning behind their new single that has just been released.

With its universal message of hope, the band’s latest offering remains true to their signature alternative rock sound and is meant to inspire fans to shrug off their personal doubts and fears and to combat negative culture with light.

“Jayson came up with the original composition. It was one of those instant goose bump moments when the rest of the band heard it. We then got together to brainstorm about the lyrics, which were completed soon thereafter,” adds lead singer and rhythm guitarist, Dustin McCrindle. “We fully acknowledge that everyone has struggles, we just don’t believe that it is healthy to stay in a dark state of mind or put too much focus on the bad. See the bad stuff and deal with it. Yes! But do not allow it to consume your thoughts.”

According to the group, which also consists of Jaco Novella (drummer) and Pierre du Toit (bassist), VOICES was the first song they recorded in studio and apparently it is also a big hit with the ladies at their shows. “For some reason they really seem to like it! The verses boast a catchy modern tune and the chorus has a big anthem vibe. It is a belter that people enjoy singing along to,” says McCrindle.

The new single follows in the successful footsteps of their previous release, In Between The Lines, which is also the title track of their album. This song not only got play-listed on various national and Australian radio stations, but also topped the charts of Kovsie FM (97.0FM) and Die Strandloper, Australia (94.7FM) and featured on the hit parades of various other stations, including PUK FM (93.6FM). The music video, filmed and produced by Reblex Photography’s Llewellyn Lloyd, was also very well received.

Both singles are available on their debut album that contains eleven original tracks. While presenting a good variety of sounds, the songs work well together to form a whole and offers a broad spectrum of the group’s musical abilities instead of a one-dimensional experience. It not only showcases their modern take on rock music, but also offers a variety of sounds and emotions, which is sure to be good for the soul.

RISE IN RED is a versatile Bloemfontein-based alternative rock band, which has made a name for themselves with their inspiring lyrics and captivating stage presence. It was founded by Reynolds, McCrindle, drummer Jaco Novella and bassist Kyle Bath in 2010 as a project primarily focused on song writing and production.

Their name came from Reynolds. “We are all Christians and our inspiration for writing songs is always centred on our beliefs. That’s why we focus on bringing a message of hope. Our name appeals to listeners to stand up (rise) for what they believe in,” he says.

The band developed and established its unique sound and vision and moved towards live performances at the beginning 2015; the most notable of which was performing with Prime Circle during their ‘Let the Night In’ album tour. They have also played alongside aKing, Dan Patlansky, Francois Van Coke and other notable acts. In 2018, Pierre du Toit joined RISE IN RED as the bassist for the band.

In addition to finalising their tour schedule for the coming year and planning their new music video, RISE IN RED has also been busy creating some awesome content for their YouTube channel with the help of band mentor Damian Keyes. Fans and guitar enthusiasts can look forward to very informative how-to-videos by Jayson, behind-the-scenes footage and lots more. Follow them on social media to stay posted!

The single is available on their album here: