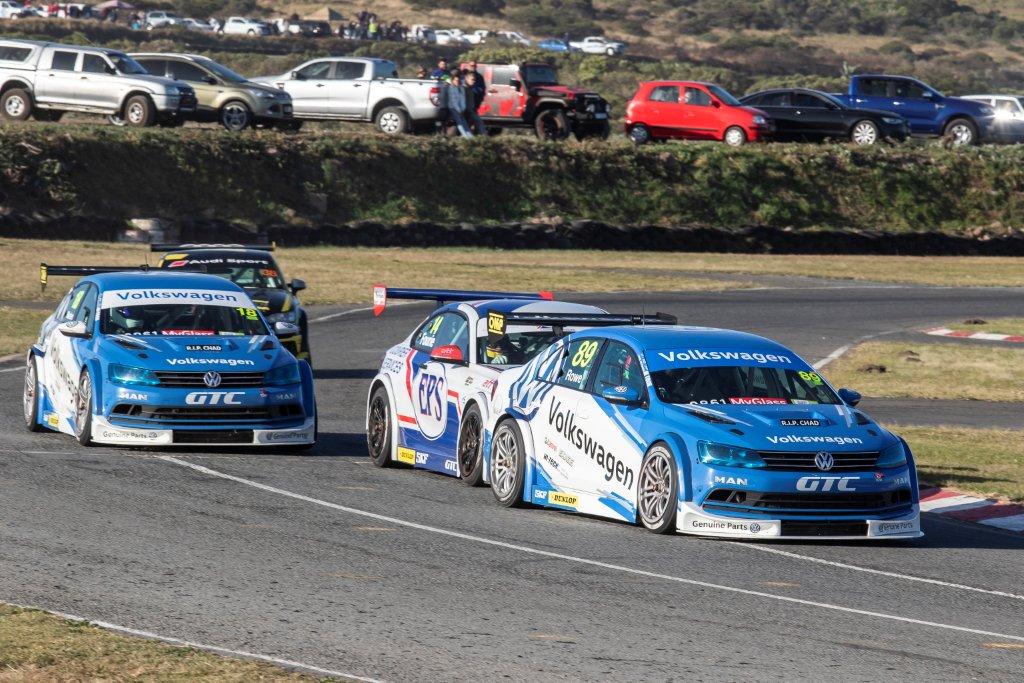 Brian Joss – The Global Touring Car (GTC) championship is rapidly drawing to a close, with the penultimate round taking place at Killarney Raceway on 27 and 28 September.

Volkswagen Motorsport heads to the Cape Town race in the enviable position of topping the drivers’ and manufacturers’ standings in both the GTC and GTC2 categories.

Round 7 of the GTC series is poised to deliver some exciting action for Cape Town motorsport fans, with the closely contested drivers’ championship currently led by 19-year-old Keagan Masters in the Volkswagen Motorsport Jetta after scoring his first win last time out in East London.

Having secured a solid fourth-place finish in the reversed-grid second race, Masters now tops the championship table on 232 points, ahead of Audi’s Simon Moss and the Toyota of Michael van Rooyen.

Team-mate Daniel Rowe scored fourth and third-place finishes in East London respectively, which added to his tally of five podium finishes this year.

Rowe is currently fourth in the overall standings, with a mere 17 points separating the top four drivers – which sets the scene for an exciting battle over the remaining two events.

With the Killarney circuit having been a happy hunting ground for the Volkswagen Motorsport team at Round 3 in May, with Rowe winning the first race and Masters ending runner-up in race two, the team is looking forward to another good showing on their return to the ‘Mother City’.

“We were really strong in Cape Town earlier this year, and after our great results in East London I think we’re going to have a good car for the next race,” said Mike Rowe, head of Volkswagen Motorsport.

“Daniel won the first race at Killarney and then had issues in race two, while Keagan had some problems in the first heat but finished second in race two, so it’s a track where we’ve performed well, and we’re hoping to do the same again next weekend.”

“The opposition have certainly come back at us in the last couple of races, so the team has been doing its homework and working hard to ensure that we stay strong for the remainder of the season,” Mike Rowe added.

In the GTC2 category, the Volkswagen Motorsport Golf GTi entries of Bradley Liebenberg and Adrian Wood have continued their season-long dominance, despite having to carry additional weight and use an engine intake restrictor for the past two events in an effort by the organisers to level the playing field. Nevertheless, they retain the top two positions in the championship table, with Liebenberg on 261 points and Wood on 230 points.

In East London, Liebenberg finished second in the opening race and took the race two win, while Wood claimed a pair of third-place finishes – although he was on track to win the second heat until gearbox issues slowed him on the last lap.

On their previous outing at Killarney in May, Liebenberg took the race one victory, with Wood crossing the line second. An unfortunate on-track incident in race two saw both drivers retire, and they will both be vying for the top step of the podium as the title battle intensifies for the penultimate event.

“Bradley and Adrian have shown superb grit and determination this year, particularly in the last two races where they’ve had to carry ballast and make do with less power due to the intake restrictor,” Rowe commented. “I’m sure we will see great performances from then once again in Cape Town.”

The practise sessions on Friday 27 September will be crucial for vehicle set-up, with a good qualifying performance on Saturday morning essential to secure a front-row starting position for the race. There will be two GTC feature races on Saturday afternoon to keep fans enthralled.

CAPTION: On a knife-edge: VW  leading the drivers’ and manufacturers’ championships in GTC and GTC2. Picture: Quickpic