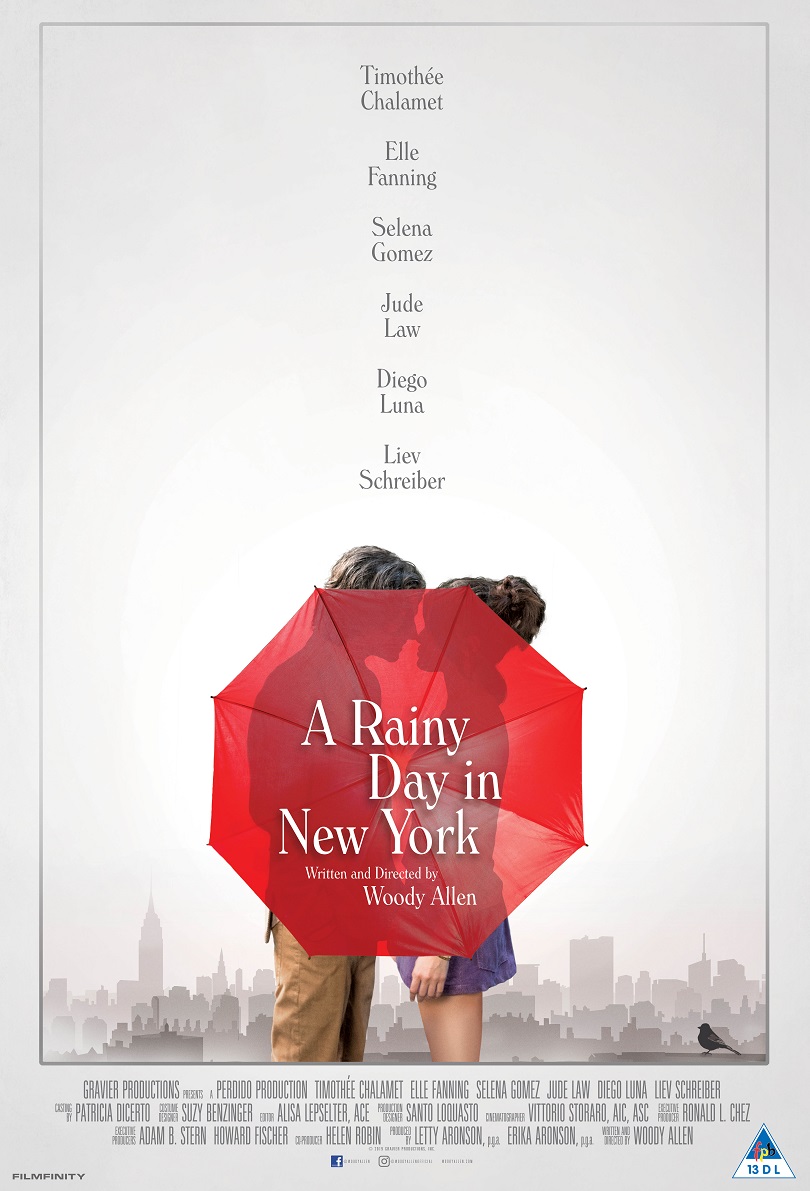 A young couple’s plans for a romantic weekend in New York are dashed when sunlight turns into showers and things don’t quite go according to plan. A series of chance meetings and comical adventures ensue.

A RAINY DAY IN NEW YORK, written and directed by Woody Allen, is a romantic comedy starring Timothée Chalamet as a wealthy young New Yorker torn between his college sweetheart (Elle Fanning) and a seductive aspiring actress (Selena Gomez).

The film, the 49th by 83-year-old Allen, is the director/writer’s rendition of an old-fashioned Hollywood romance. “I’ve always loved those movies,” he says. “I find them to be so wonderful. This is a love story, and I was excited by the idea of setting against a romantic portrait of New York in the rain.”

Chalamet does a terrific job channelling the typical antihero – a neurotic, scrawny and critical New Yorker who is also quite the charmer – in the form of Gatsby Welles, a prep school kid in quiet rebellion against his wealthy family. He has come to the city with his girlfriend, Ashleigh, a bubbly journalism major who has landed an interview with the legendary filmmaker Roland Pollard (Liev Schreiber).

An old soul, Gatsby loves vintage New York and has put together a jam-packed itinerary of classic city haunts for their time in the city. But his well-laid plans are quickly side-tracked and, over the course of one long and rainy day, the couple barely see each other. As Ashleigh is engulfed in her big scoop, Gatsby ends up wandering the streets.

While Ashleigh’s day follows a head-spinning series of encounters that lead her from Pollard to screenwriter Ted Davidoff (Jude Law) to movie star Francisco Vega (Diego Luna), Gatsby – through a series of events – ends up spending the day with the younger sister of his ex-girlfriend, who is portrayed by Gomez with breezy self-assurance and an appealing down-to-earth demeanour.

A RAINY DAY IN NEW YORK cleverly juggles characters and situations, and it soon becomes clear that the characters all have issues that revolve around their identity. Each character endures their own crises and revelations, and even Gatsby’s mother (Cherry Jones) is ultimately revealed to be a completely different person from who her son had previously thought her to be.

Closely linked to this motif of identity is the yearning that the characters want to be seen. “The characters have a need for people to look through their physical exteriors to who they are inside,” says Allen. “This is a common thing in life. You have a crush on somebody, but they don’t see you. Of course, they see you visually, but you don’t register in an impacting way on their life.”

In keeping with characters who struggle to be recognised for who they really are, cinematographer Vittorio Storaro cleverly obscures the characters faces, often in shadow. He also uses different kinds of light and camera movement to emphasise the differences between Gatsby and Ashleigh’s personalities, to great effect.

In addition to the cast, both New York City and the rain play pivotal roles in the movie. “We wanted rain to be a symbol of romance and love in the picture,” says Allen. “New York is very beautiful on those grey, foggy, or rainy days. There’s something about the soft lighting and the streets getting washed clean. The rain also suggests the different ways that Gatsby and Ashleigh see life. Ashleigh sees the rain as gloomy, while Gatsby sees it as romantic,” says Allen.

The film is a witty and charming bittersweet comedy, peppered with splendid performances by some of this generation’s brightest stars.

A RAINY DAY IN NEW YORK is distributed by Filmfinity (Pty) Ltd. and will be released in South African cinemas on 25 October 2019.