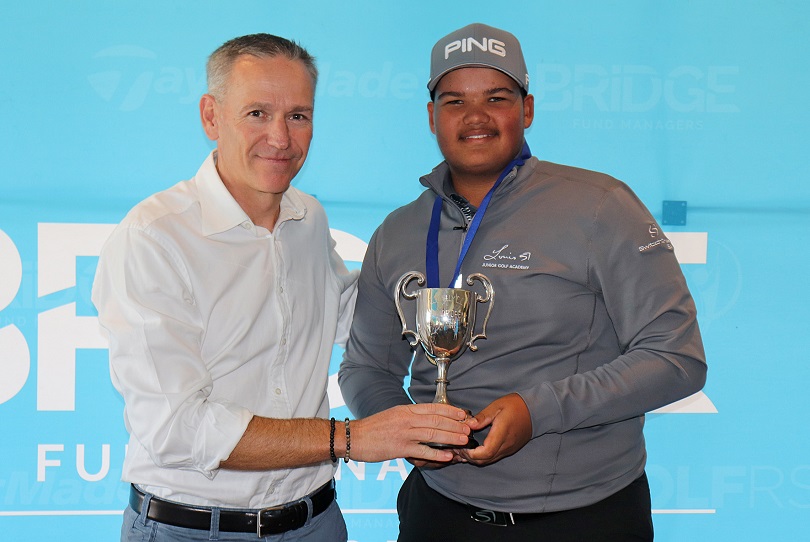 Duminy fired a five-under-par 67 to tie Ayden Senger from Western Province for the lead. In the ensuing play-off, the Mossel Bay golfer leaked his tee shot right on the par five 10th. He produced a spectacular shot to get out of the trees and fashioned a world class pitch-and-run to beat Senger with a tap-in birdie at the first extra hole.

Conditions were quite different when Duminy arrived at Clovelly on Sunday for the second Sunshine Tour Junior Series event.

With a strong South-easterly wind raging and rain sweeping across the course, Duminy fired 16 pars and the consistency paid off with a level-par 72 that left him two shots shy of first round leader, Ryan van Velzen from Ekurhuleni.

The sun broke as the field started the final round and the GolfRSA National Squad member took advantage of the improved conditions to wipe out the deficit with a pair of birdies on the third and fourth holes.

He cancelled a bogey at the sixth with a birdie at the 10th and rallied with back-to-back birdies on the 14th and 15th holes after dropping another shot on the 13th. The fight for the title proved to be a two-horse race between Duminy and Snyders over the last few holes.

“We were still tied for the lead on three-under when I got the 18th tee. We had quite a strong wind from the right and I thought I had hit my drive too far left, but it came out perfectly. I had cleared both bunkers up the hill and I was about 20 metres short of the green. I chipped it to six feet and holed the putt for birdie,” Duminy said.

The birdie finish for four-under-par 68 proved good enough as Snyders parred the finishing hole and came up one shot short of Duminy’s winning score on four-under 140.

His ability to produce winning shots under enormous pressure has become Duminy’s trademark and a major attribute in his meteoric rise in the official world golf rankings and Golf RSA Open and Junior standings.

Next month the Louis Oosthuizen Junior Golf Academy member will head to Mauritius to make his debut for South Africa in the All Africa Golf Team Championship. In December, he will join fellow GolfRSA National Squad members Martin Vorster, Jayden Schaper, Christo Lamprecht and Sam Simpson on the International Team at the 2019 Junior Presidents Cup in Australia.

The Pinnacle Point golfer said the conditions were tough, but he just kept his head down and focussed on getting through the course shot-by-shot.

I try not to focus on the conditions, but just on the shots I’m making. That way I don’t get distracted by what’s happening around me. It was a good weekend,” the 2019 SA Amateur finalist said.

“We teed off in a three to four club wind in the morning round, and it was blowing especially hard on the back nine. I played really well in the first round, but I just didn’t make enough putts. The rain let up over the last 18 holes and the wind wasn’t as strong, but I also made a lot more putts.

“I got myself into the Bridge Fund Managers Junior Series final, which is pretty cool, because that gives me a chance to shoot for a spot in the Junior North and South. Competing for a spot at Pinehurst is a big attraction of the series. I have played Pinehurst twice before so hopefully I will win the regional final and get to go back. And I’ve landed my first Sunshine Tour Junior Series title. I’m really happy with things turned out.

“It’s been a very exciting year. There is always room for improvement, but I’m really happy with the way my game is maturing and form I’m building. My course management is also a lot better than a year ago and that is another step in the right direction.

“I have been given amazing opportunities this year through the GolfRSA National Squad Tour, Louis Oosthuizen Junior Golf Academy and the Southern Cape Golf Union. It feels good to repay the trust they all put in me with good results.”