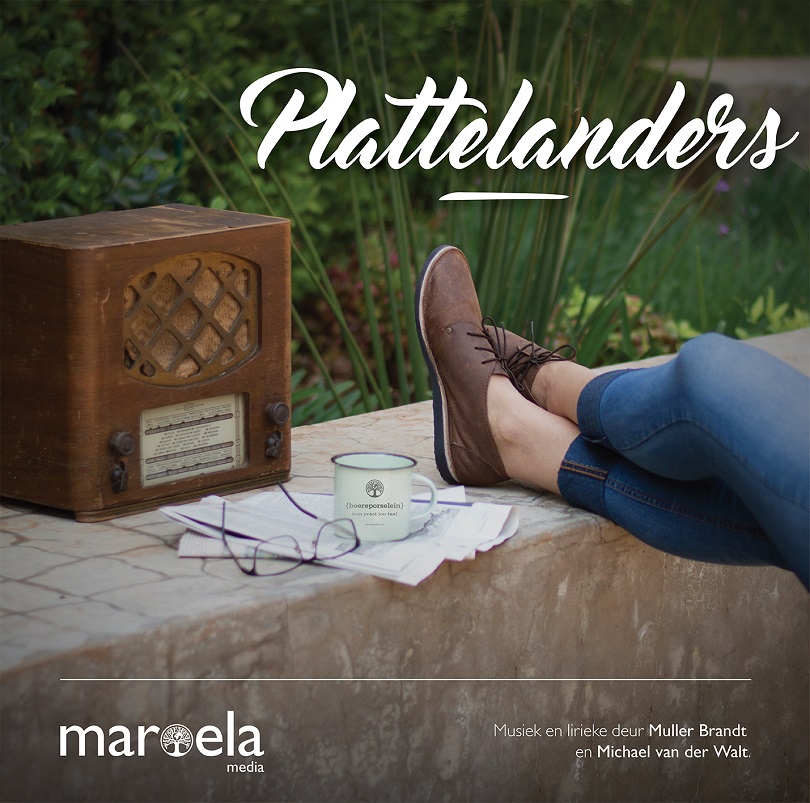 News, much like music, is something that never goes out of style. It attracts attention, is always relevant and forms an integral part of society.

Therefore, it was only fitting for a large news source like MAROELA MEDIA, which keeps the Afrikaans speaking community updated on local and international news on a daily basis, to release a theme song that illustrates the connection they have with their readers.

PLATTELANDERS, written and produced by Muller Brandt and Michael van der Walt, was created when the news platform was looking for a theme song for their radio drama of the same name. “The sound had to be uniquely Afrikaans, but also appeal to a broader audience. Something tongue-in-cheek, positive and cheerful,” explains Susan Lombaard, CEO of MAROELA MEDIA. “Michael and Muller are both very talented musicians who like working together. Their sound is truly unique to the Afrikaans culture and they have a good sense of humour. That’s why they were the perfect artists for the job and they certainly do not disappoint.”

According to the singers, they tried to create a typical picture of how things would go in a small farming community – in the hope that everyone who have lived in (or visited) a small town, at some point, would be able to relate. The end result is a catchy upbeat dance number that, with the use of various instruments such as the harmonica, manages to perfectly capture the typical Afrikaans community. It also reminds us that although life happens and news is not always positive, tragedy often has the ability to bring us closer together.

“It is a great honour and privilege for us to be part of this project. We really love the people at MAROELA MEDIA and what they stand for, because we also share their love for Afrikaans, people and the Lord,” they share about this wonderful opportunity. “We both work hard at advancing our music careers and hopefully the launch of the song will help us to establish ourselves as songwriters. Writing more songs is one of our main objectives and we are currently working on some new ideas.”

PLATTELANDERS will be released to radio on 3 October 2019 and is also the theme song of MAROELA MEDIA’s new digital initiative, Maroela-fontein, which will be launched at the end of the year and will encourage readers to become a part of this digital town.

Lombaard adds: “Afrikaans is much more than a language. It’s a culture that millions of people in our country identify with. With PLATTELANDERS, we wanted to create a picture of who we are with sound and lyrics. We believe that every Afrikaans-speaking person will see something of himself or herself in the song. Our heart beats in Afrikaans and with this song we take our dream, to bring together an Afrikaans-speaking community from different backgrounds and make them feel at home, a step further. We want to make them sing and laugh again and remind them of where they came from. We want to give them hope by creating a song that comes from community for the community.”

Muller Brandt is an Afrikaans singer and songwriter who believes that he and other artists should be a voice of hope in the country. This Pretorian comes from a musical family and obtained his music diploma at the Campus of the Performing Arts (COPA) after school. Since then, he has worked with some of the country’s biggest producers and released several singles, including “Ballades wat resoneer” and “Jy is”, which featured on the Top 20 charts of several radio stations’ hit parades.

Muller draws inspiration from international stars such as Ed Sheeran, John Mayer, Bon Jovi and Chris Tomlin, and from local artists like Theuns Jordaan, Matthew Mole, Joshua to the Rain, Len Muller and Kaleidoscope. He hopes to release his own CD soon and to write music for other artists.

Michael van der Walt has been involved in musical activities ever since he can remember. However, it was only in his matric year, when he learned to play guitar that he realised that this was what he was meant to do with his life. Soon afterward, he joined his church’s music team and soon became the leader of their youth music ministry.

After winning a talent competition with one of his original songs, he started a music group that later split up as life happened and all of them moved on to bigger and better things. In 2016 he started the group, ’n Pel Van My, with Muller Brandt and started singing at weddings, parties and functions.

He plans on sharing a brand new project with his fans soon and will be releasing original music as Mighael van der Walt.

PLATTELANDERS not only showcases how talented these musicians are, but also reminds us of the empathy, love and support that exists within the Afrikaans community.

The song will be available on Joox from 3 October 2019 and soon after on all other digital platforms as well.  It is already available on the Maroela online shop, die Koöperasie at www.maroelawinkel.co.za, so if you like it you can go and purchase it right away!