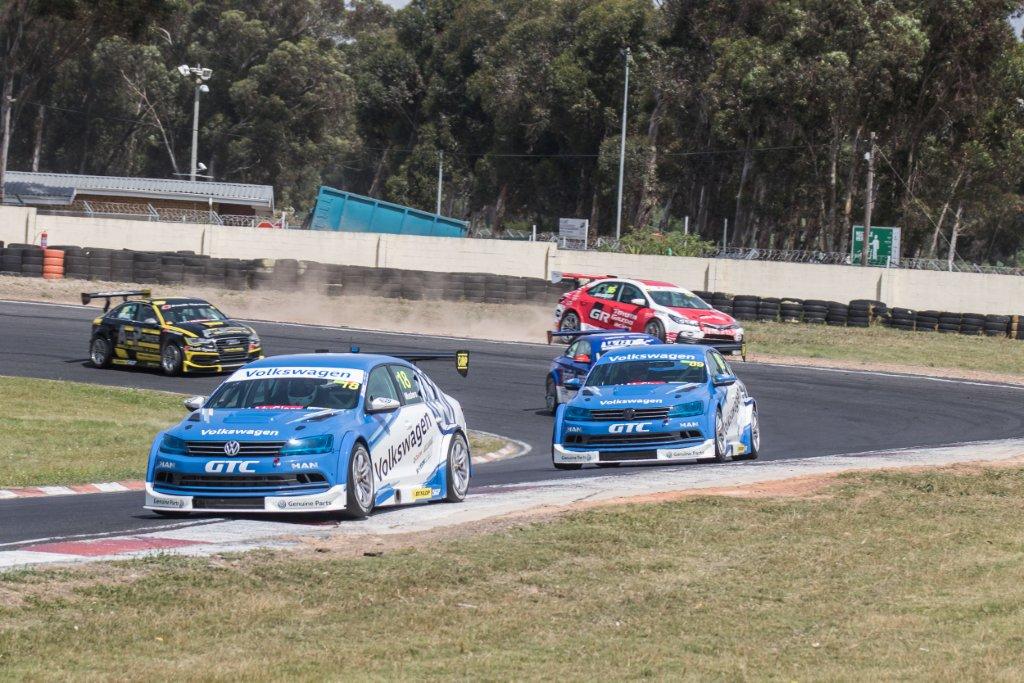 With the top-level GTC Manufacturers title virtually in the bag, it reinforces the German brand’s exceptionally long and proud pedigree in local motorsport.

Round 7 of the GTC series wasn’t the easiest of weekends for the Volkswagen Motorsport South Africa team, made all the more challenging due to unseasonably hot conditions throughout the event.

And the on-track action was just as intense as the weather, with Saturday’s crucial qualifying session seeing Volkswagen’s championship leader Keagan Masters emerge as the fastest of the Jetta drivers in third place, less than nine hundredths of a second off the pole position time of Simon Moss (Audi). Daniel Rowe finished the session in sixth place, a mere 0.293 sec off the leader – proving just how close the GTC field is.

In the first race the Volkswagen Motorsport drivers were involved in an exciting battle for third place with Michael van Rooyen (Toyota), with Rowe claiming the advantage to moved ahead of the group. With Van Rooyen running into trouble, Masters was then embroiled in a fast-paced tussle with Robert Wolk, but it unfortunately went awry on the final banked turn before the pit straight. A mid-corner clash sent both cars off the track, and although they both got going again, with Masters crossing the line in third place, he was later penalised for the incident and classified sixth.

Rowe had been perfectly placed to grab a well-deserved podium finish, only for his car to cut out heading onto the pit straight on the second-last lap. He eventually got going again but had to settle for fourth in the final results.

In the reversed-grid second heat, Masters managed a clean race and finished third. Moss crossed the line fourth, but he too was handed a three-place penalty for knocking Johan Fourie (BMW) off the circuit.

Despite the Volkswagen Motorsport crew’s efforts to resolve the issue with Rowe’s car, the technical glitch resurfaced in race two in exactly the same spot on the track. Fortunately, he got the car going again and ended sixth, but was promoted to fifth place due to the penalty handed to Moss.

In the provisional championship standings, the podium finish ensured that Masters retains the lead of the GTC championship going into the title-deciding final round at Red Star Raceway at the end of October.

Rowe remains in fourth place, and among the contenders for the prized 2019 title.

“I felt confident during Friday’s practice and during qualifying, just missing pole position by 0.87 seconds,” Masters said. “The first part of race one was good, but I struggled a bit later on and had the incident with Robert which resulted in a penalty and landing up sixth. My car’s setup was better for race two, but we just didn’t have the straight-line speed to keep up with the guys in front. At least I still lead the championship going into the final race of the season, so overall it was a decent weekend for me in Cape Town.”

Daniel Rowe commented: “I had a good start in the first race and got up to third place, but then the car just cut out. In race two I had another good start from second place on the grid and almost managed to pass Wolk for the lead, but slotted in behind and followed him for almost the whole race. I flat-spotted a tyre with two laps to go and decided to nurse the car home, until the last corner on the final lap when the car cut out again. We thought that we found the issue, but unfortunately it reappeared, which is disappointing for me but it actually helped Keagan to get third place which is important for his championship.

It was a mixed bag for Head of Volkswagen Motorsport, Mike Rowe: “It has been a difficult day, particularly for Daniel who lost a third and then a second position due to a small issue on the car. Keagan also had a tough day in the office, but I’m confident that we’ve done enough to secure the Manufacturers Championship at the final race, which is great for the team.

“It’s great to have Keagan still leading the Drivers Championship, but it’s very tough at the top right now and any one of five drivers can still win the title this year at the final round at Red Star, so it’s going to be very interesting right to the end,” he stated.

In the first race Wood enjoyed an unchallenged flag-to-flag victory, while Liebenberg suffered brake issues that resulting in him dropping down to fourth place. The second race saw the finishing order reversed, with Liebenberg taking the win and Wood having to settle for the second step on the podium.

“I started the weekend really strong but didn’t get it perfect for qualifying, although the times were really close,” Liebenberg said. “In race one we had an issue with the brakes, so I just circulated to get points. For race two I started at the back of the field but managed to work my way to the front and came out on top, so I carry the championship lead going to Red Star and hopefully I can wrap the title up.”

Wood said: “It was a very good weekend, and I ended up with pole position in qualifying. The first race was all about managing the tyres to get the win. In race two Brad got ahead of me while I was battling with Charl Smalberger, and after that I couldn’t catch him so I focused on bringing the car home to score maximum points.”

The next round of GTC takes place at Red Star Raceway in Delmas, east of Johannesburg, on 25 and 26 October.