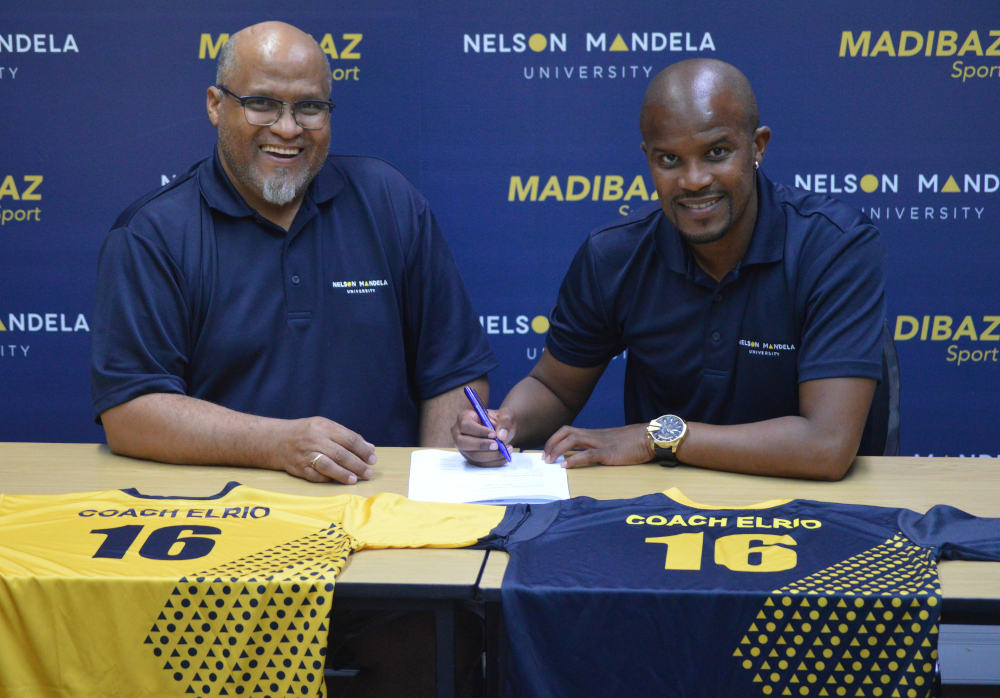 Although the 36-year-old midfielder has been assisting the Nelson Mandela University team in recent years he now has a specific role in the management team.

Mark Tommy, the Madibaz Sport football manager, said it was a massive breakthrough for the club to have a player of his stature assisting head coach Wayne Iveson.

“Madibaz Football has a proud history of growing Port Elizabeth talent and investing in the next generation of quality local coaches,” he said.

“Elrio is an international star, having left for Europe as an 18-year-old to play professionally and, since returning to South Africa, has been coaching young players in the city.

“He also assisted Madibaz to gain promotion to the A section at the 2018 USSA (University Sport South Africa) tournament.

“We are really excited to have secured his services and his work with the students has been amazing. The players look up to him as an international quality player and admire his work ethic and tactical astuteness.”

He said the appointment was in line with the university’s ideal of “a case for change” to grow the quality and professional sport experience of their talented footballers.

Van Heerden, who earned 37 caps for Bafana, said “it is amazing” to be back where his soccer journey started over two decades ago.

From 1998 to 2001 he attended the Soccer School of Excellence, which was part of the then University of Port Elizabeth.

“It’s always good to come back to where you started and give something back to the young players of today, trying to help them reach new heights,” he said.

“It’s been a wonderful career for me and I have picked up the experience in professional soccer which I hope to pass on to the Madibaz players to help them achieve on the field.”

Among his immediate aims is to help prepare the squad for the USSA tournament in December, where they will be aiming to secure a spot in next year’s Varsity Football competition.

“The quality is there and it’s a matter of bringing out the best in the players and getting them to believe they can do it,” he said.

“As much as they want it so do the other varsities, so it’s the one who puts in the hard work and stays disciplined who will achieve in the end.”

Van Heerden added that he was revelling in his relationship with the students, sentiments which were shared by several players.

Madibaz captain Samuel Connelly said his impact had been “nothing but positive”.

“Every training session with coach Elrio we learn something new. These are sessions where we have to think and work hard at the same time.

“I think most people have the perception that training is always serious, but with coach Elrio and the management we have times where it’s just fun and games.

“That helps a lot with the intensity of some training sessions.”

Siwaphiwe Maso, who was selected for the Nedbank Ke Yona team this year, admitted he was a bit overawed at first in view of Van Heerden’s achievements.

“But he’s the one who cracked the joke and broke the ice,” he said. “We all laughed and became comfortable around him. He made us feel free and treated us the same.

“Last year in preparation for USSA he boosted our confidence, took away the pressure and helped us to achieve good results.

“All I can say is that the players are always willing to push for more, because he brings the best out of them.”

USSA U21 player Caleb Turner said Van Heerden had brought a different dimension to their play.

“As players we connect with each other on a level that we didn’t connect before.

“I am excited to learn more about the game through his ideas and strategies.

“His work ethic is on another level and this made me realise that to achieve more one has to do more and be totally focused in every session.”