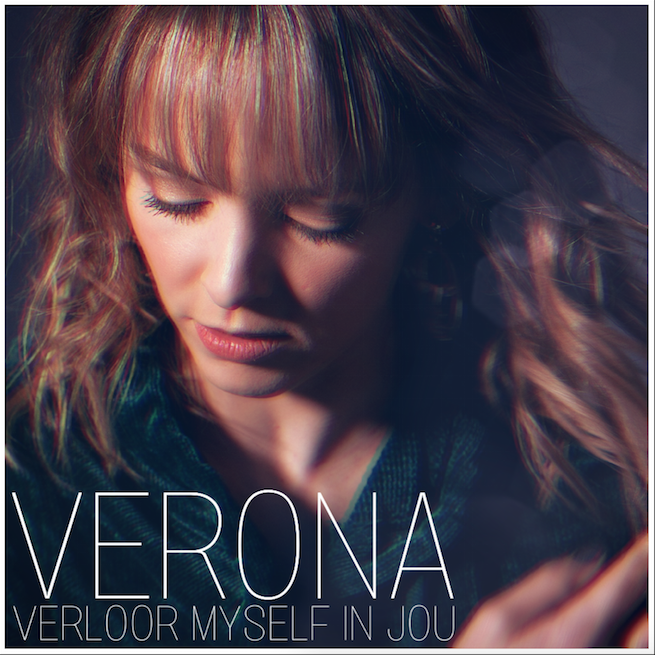 “Jy’s my dag, jy’s my nag. Jy’s die rede dat ek leef. Jy’s my asem, my krag. Jy’s die een wat my laat val of sweef en ek kry net nooit genoeg nie (You’re my day, you’re my night. You’re the reason I’m alive. You’re my breath, my strength. You’re the one who makes me fall or fly and I just cannot get enough)… ” are some of the heartfelt lyrics taken from South Africa’s favourite radio personality, television presenter, journalist and reality star, Verona’s, brand new single that has just been released.

VERLOOR MYSELF IN JOU is a beautiful love song about that wonderful feeling in your heart when you are head-over-heels in love and also about how special it is when you discover that those feelings have developed into true love. “Every person in this world deserves to be happy and to fall in love at least once. Even if it is corny and may lead to a broken heart,” reveals the singer, who recently got engaged to her soulmate. “You can dedicate this song to that one special person in your life. I hope that it provides couples with the words they don’t always have, but would really like to say.”

According to the artist, both of her previous single releases were more motivational songs. Therefore, she decided that it was time to share a more emotional and uplifting love song with listeners and the response has been overwhelmingly positive so far.

VERLOOR MYSELF IN JOU also forms part of her debut album, Maskers, which was released in June 2018 and had to be put on hold when Verona made it through to the knockout rounds of the reality series, The Voice SA, after impressing the coaches with her emotional version of Avril Lavigne’s Head Above Water during the blind audition rounds.

“The Voice SA was an incredible experience. Even though I only made it to the knockout stages, it totally enriched my life. I learned so much, made lifelong friends and broadened my knowledge of the music industry,” she says. “I like to take on new challenges and get out of my comfort zone. If you do not do this regularly, you will not grow. Now I am ready to take on the next phase of my career.”

Her debut album boasts a collection of eleven powerful contemporary tracks, in which she not only showcases her singing talent, but also bares her soul to the world. It addresses various relatable topics, such as taking chances, living the best life that you can, standing up for yourself, love, loss and heartbreak and will resonate with audiences of all ages. The titular track  was released in 2018 and impressed music lovers from the get-go. It reached the number one spot on the Top 20 charts of two radio stations and is still regularly featured on air.

Verona, who currently resides in Meyerton, was only four when her talent was discovered. Her aunt would pick her up from school and then the two of them would sing together on their way home. Later her mother was told to send her for singing lessons. At the age of eight, Heidi Schoeman of the Theater of Performing Arts, took her under her wing and she performed her first song at the Vereeniging Arts Festival for which she received an A ++. During her school career she regularly participated in Eisteddfods, school concerts and arts festivals. She also completed her Trinity Concert Certificate. The artist was part of the South Gauteng Youth Choir, Colla Vocé, for four years. She also studied a little bit of musical theory, can play the piano and guitar and always tries to take on new challenges like learning to play the ukulele.

After school, she decided to put her singing career on hold in order to complete her studies and obtained her honours degree in journalism from North West University’s Vaal Triangle Campus. During this time she was given the opportunity to play the character, Brionay, in 7de Laan and was also the runner-up of a reality series on kykNET called Jy is My Liefling. She and her good friend, Llewellyn du Plessis, were also the producers and presenters of the ASTV series, Vir Ewig en Altyd, which mainly focused on the wedding industry. The singer also worked as co-presenter of a breakfast program on 90.6 FM Stereo, the Vaal Triangle’s local radio station. When she is not singing, she is also a dedicated journalist and social media specialist.

Laurika Rauch, Amanda Strydom, Anneli van Rooyen, Koos Kombuis and Anton Goosen are among the musicians who had an influence on the singer’s musical style. She also has great appreciation for the work of international stars such as Adele, Nora Jones, Katie Melua, Florence and the Machine, Alanis Morisette, Ellie Golding, Rachel Platten, Annie Lennox, Etta James, Ella Fitsgerald and Roberta Flack. The music industry has taught her that nothing comes for free and that you have to work hard to achieve your goals.

VERLOOR MYSELF IN JOU is a must for anyone who enjoys love ballads. This hit does not only complement the uplifting message of the song, but also beautifully showcases Verona’s powerful voice. It is definitely the perfect way for the artist to kick off the next phase of her career and fans are looking forward to hearing a lot more from this talented musician.

THE ALBUM IS AVAILABLE ONLINE AT: