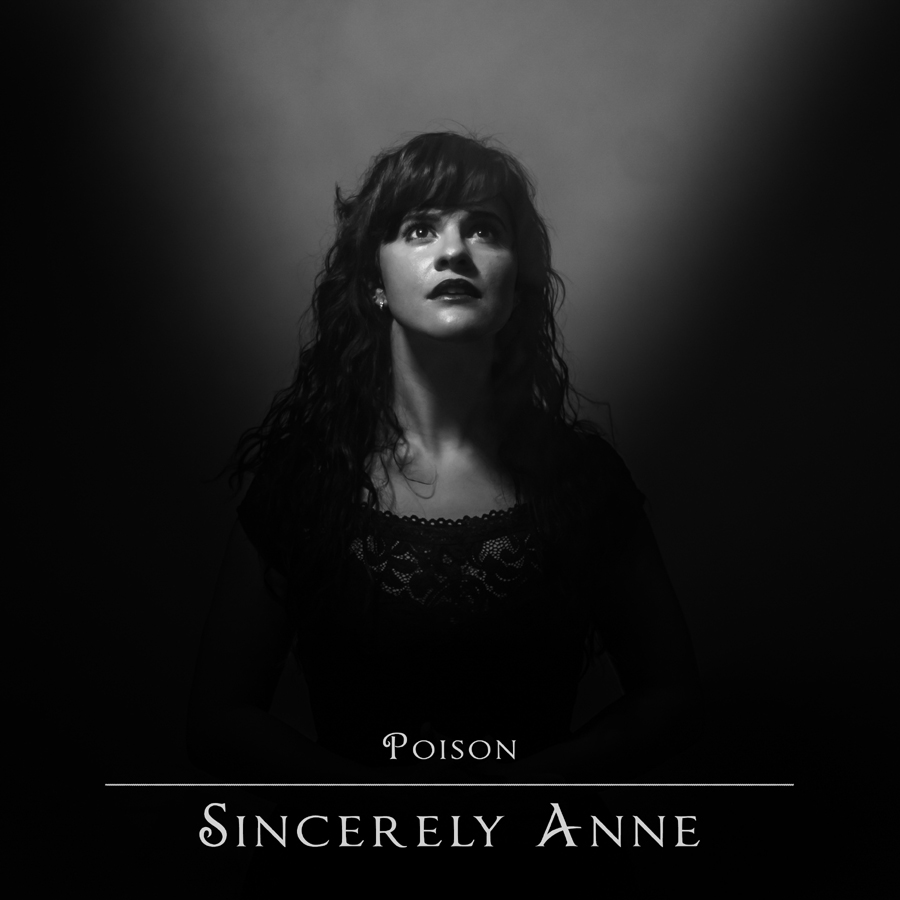 Sincerely Anne stops you in your tracks when you hear her sing for the first time. There is a goose bumpy sincerity and soothing velvety tone to her voice that invites you to get lost in her meaningful lyrics… and makes you want to listen to what she has to say until the last note fades away. It is these characteristics that make her debut single so unforgettable.

POISON offers a captivating upbeat combination of Progressive, Alternative and Pop Rock elements. The song was written by the artist herself and deals with the consequences of allowing yourself to be sucked into a toxic environment. “I usually prefer that audiences interpret my music in their own unique way. However, if I had to summarise what this song is about for me, I would say that it is about allowing yourself to be sucked into a toxic interpersonal environment and the ensuing effects it can have on your mental health,” says the talented musician and songwriter about her new release. “I had recently come out of a situation that was bringing me down big time. The song was where I was able to place my feelings and the lyrics came to me through journaling and a dream.”

According to the singer, she used to write songs as part of a band and POISON was one of the first songs that she composed on her own. She shares: “It was the first song I brought to the studio and the start of a very fulfilling journey of working with the most amazing people. I think listeners will be able to relate to it, both lyrically and musically. If my music can make just one person feel less lonely, it would truly make me very happy.”

Anne currently lives in Johannesburg, but grew up on a farm where she was home-schooled until the age of thirteen. She is the youngest of five children and started playing the violin at a very young age. Since then, music became an integral part of her life. The star had been playing violin at events for nineteen years and singing in bands for five years before launching her solo career in 2017, which she regards as one of her biggest achievements so far.

Over the years, she has enjoyed many career highlights and shared the stage with various big names in the music industry, including Connell Cruise, Ard Matthews, Joshua na die Reën, Jan Blohm, Amanda Strydom, Graeme Watkins Project, Shortstraw, Shaun Jacobs and more. She also featured in various orchestras, like the NWU PUK Orchestra and Rand Symphony Orchestra, as concert master and violinist.

While the artist enjoys a wide variety of music, she credits Muse as one of the bands that had a big influence on her own raw and authentic music style. “I mainly listened to classical music until I was about ten years old. After being introduced to contemporary music, I was naturally drawn to music that contained classical elements. However, each of the songs I write vary from the next and the ‘influence’ behind them differ,” says the singer.

If you ask her about the inspiration for her lyrics, she answers that it often comes from personal experience and emotions and that playing around on the piano also helps to clear her mind for the words to come. She shares that she is a violin and piano tutor when she is not on stage and that she would probably have considered a career in psychology or physiology if she couldn’t sing.

Sincerely Anne believes that opportunities should be seized and that dreams should not be postponed. She wants her music to be an expression of what people feel, but don’t always know how to deal with. With POISON she not only exceeds this goal, but also secures her spot in both the hearts of South African music lovers and on the hit charts of the country’s largest radio stations.

This song is available on all digital platforms here: